In another case of “it’s who you know” in Montgomery County, isn’t it somehow odd that 2 petty thieves don’t end up in jail- and have to wait for a speedy trial just like everyone else- because they were members of the UD Men’s basketball team?

Any other black male, caught breaking into UD dorm rooms and stealing stuff, who was positively identified, would have been in jail the next day, and already done with his sentence.

But, not Robinson and Scott- they get to “go home” or to some other school- and pretend like nothing happened for 3 months, until the UD season is over, to avoid distraction from “the run” that the team was on.

Read the language in the DDn article:

Two former University of Dayton basketball players accused of felony burglaries on campus in December will soon return to the area to face charges, their attorneys said Wednesday.

The Montgomery County prosecutor’s office on Tuesday issued nationwide arrest warrants for Jalen T. Robinson and Devin H. Scott. Robinson, 21, is currently enrolled at the University of South Carolina Aiken, according to the school’s sports information department. Scott, 20, is in Georgia, and has been researching schools, his attorney said.

A supervising deputy for the U.S. Marshals confirmed that the Southern Ohio Fugitive Apprehension Strike Team (SO-FAST) and Dayton police were working to bring in Scott and Robinson.

“They are not typical fugitives who went on the run after they became aware that they are wanted,” Supervising Deputy Jeremy Rose said. “I believe in the near future they will turn themselves in.”

Jewson admonished Heck’s office for the press release, which stated that surveillance video from Dec. 14, 2014, positively identified Anderson and Scott and that the investigation is ongoing.

“None of that information has been presented to me and, frankly, I think it’s inappropriate for the prosecutor to attempt to try this case in the media and — basically regurgitate all the facts that they have that haven’t been disclosed to the defense — and put those out into mainstream media through Facebook and other outlets,” Jewson said, adding that such video hasn’t been tested for authenticity or admissibility. “It’s basically rumors at this point.”

via Lawyer: Ex-UD players to return.

And, at the same time, the coach who brought these misfits to Dayton, is getting a contract extension and probably a raise.

What’s even more troubling, is that Devon Scott, had already been in trouble for domestic abuse. Found guilty, and handed a suspended 30-day sentence. See Aug. 25th WHIO article:

University of Dayton basketball player Devon Scott won’t serve any jail time after pleading guilty to disorderly conduct against the mother of his son.

Though he didn’t appear in Dayton Municipal Court with his attorney, Scott was sentenced Monday by Judge Deirdre Logan to 40 hours of community service to be completed by Nov. 30, a suspended 30-day sentence, a $250 fine with half of that suspended, and court costs.

Scott also must show proof of completing a domestic violence program and will be on non-reporting probation for one year in which he has no new offenses.

Normally, when a black male has a suspended sentence, and is caught in the commission of another crime, he goes to jail, directly to jail, he does not pass go, he does not collect $200. But, again, we’re dealing with UD, which gets a different set of rules for its riots, and especially for its  beloved basketball team.

I was aware of the thefts before the news broke because I live within 5 miles of campus and enjoy the anonymous social app Yik Yak as a way of taking a mental break from the serious. Everyone on campus knew the two 6’7″ bball stars had done it, because, well, they are hard to miss and well known. I didn’t want to break the news- because I don’t consider reading Yik Yak a reliable news source- nor, do I think that petty theft is worthy of my blog. But, this ranks as front page breaking news in local media. Sad to say, thieving from students somehow is worse than domestic abuse, and being able to play basketball provides you privileged treatment by the courts here in Dayton.

The University has taken great effort in trying to change student behavior, stressing “#community” and a positive ethos- with their “Green dot” program. They teach their community members (staff, faculty, students) that there are “red dots”- acts of hate, violence, disrespect- and that in order to reduce these types of occurrences, everyone needs to be tuned into “Green dot” behavior- helping each other out, respect, integrity.

From last night- a yak said “watched a clearly drunk girl stumbling home alone and got nervous when a guy approached her. I watched as he called mom’s limo for her and waited with her until they came. I fucking love this school. – posted around 3am. 63 upvotes, and a comment “green dot” 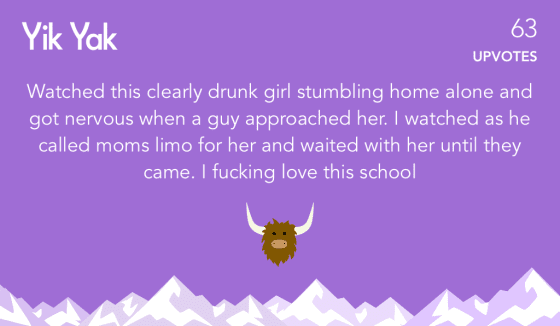 The fact that our prosecutor seems to enforce different standards of prosecution in Montgomery County is a red dot to me. Do lawyers and their families who break the law get different treatment here? How about politicians? If only half the stories I’ve heard about some of the “Monarchy of Montgomery County” in the past are true, the answer is yes- but the mainstream media are in bed with the royalty and afraid to cover it. When names are missing from police reports- and it only says “an Oakwood resident” my “friends and family” radar always goes off.

Seemingly, only the pawns, lowly basketball players, are fair game for the media to mock, and the prosecutor to play games with in public.

This is just another example of why I believe if the Justice Department came into Dayton, we’d fail the Ferguson test.

If you enjoyed reading true breaking news, instead of broken news from the major media in Dayton, make sure you subscribe to this site for an email every time I post. If you wish to support this blog and independent journalism in Dayton, consider donating. All of the effort that goes into writing posts and creating videos comes directly out of my pocket, so any amount helps! Please also subscribe to the Youtube channel for notifications of every video we launch – including the livestreams.
Subscribe
8 Comments
Inline Feedbacks
View all comments

Within an hour of posting- I’ve gotten messages thanking me for this post- and stories. A local food vendor had a bounced check for $4500 from a local attorney who owned a restaurant. Mat Heck wouldn’t prosecute.
The stories are out there- the reporting of them isn’t.
This isn’t the kind of post that wins me friends- but, hopefully it influences people to step up. Even better, would be finding a brave lawyer who will step up and run against Mr. Heck in an election, but, that would be like winning the NCAA championship this year without anyone over 6′ 6″

You can also include individuals that get heat not only prosecuted but persecuted by exposing crimes of high officials that never gets reported by government itself! They can use someone as a scapegoat to cover-up of these crimes and use the media to smear the fall guy or little guy to become the criminal out of convenience as their behaviors need profiling. Government always in most cases get a free pass for their crimes and cover-up. This is why someone with balls needs to invoke the RICO act the Racketeer Influenced and Corrupt Organizations Act to expose this once and for all. These officials need to abide by the same laws as anyone else. This is just like individuals that break the law like Hillary Clinton can avoid or entirely sweep everything under the proverbial carpet as if nothing happened. Malfeasance, neglect, abuse of power, plus these crimes could of been prevented and creating crimes by failure to prevent crime in the first place. Instead these officials will vote to give themselves a raise in salary or promoted to a higher position(check Facebook of the Montgomery county prosecutors office is sickening! You all should be outraged(you pay your taxes for this) as this keeps adding to the same conduct that many records of documents show!

Please read the past posts of the sheriffs office, Board of Elections, the city of Dayton, joining municipalities, Montgomery County, DDN our lovely media or WHIO news all included to spin a story the way they want;you need not look far with numerous examples that are in ink, in the courts or on these threads, records, and blog all one needs is look at the pattern time and time again. It all applies to the pertinent laws regarding the RICO act, state laws, and federal laws.

…”I believe if the Justice Department came into Dayton, we’d fail the Ferguson Test.” (David Esrati)

…Believe, dear David? O ye of little faith. The Old Bandito is here to guaran-frickin’-tee that if the DOJ brought their travelin’ kangaroo court to town, we’d flunk worse than Martin Sheen at a UD entrance exam. Of course, like the Kobayashi Maru scenario that even Captain James Kirk couldn’t pass without cheating, these exercises are no-win situations that no earthly entity could possibly pass. And this whole situation is starting to bear an eerie resemblance to the Spanish Inquisition. Racism is indeed the modern day equivalent to heresy and withcraft, or so our betters contend. So if Eric Holder, the modern day Torquemada, has to engage in public shaming or sending a few to burn at the stake, so much the better. Of course, there are those malcontents who question why a government would impugn and label its’ citizenry, while simultaneously amassing staggering and prosperity killing debt, and then expect the abused and insulted to pick up the tab. To the hammer, everything looks like a nail, and to a race-obsessed administration, everybody looks like…

and the day after I publish this- the DDn’s Brian Kollars writes:

Finally, there’s Scott and Robinson. And wouldn’t you know it, the county prosecutor waited until the Flyers were grounded to announce burglary charges against the former UD big guys, who are accused of stealing stuff from UD dorms hours after returning from a Dec. 13 loss at Arkansas.Call me cynical, but I’m guessing that if UD’s men were still playing … nah, what am I thinking? Our upstanding, no-comment Marianist university doesn’t have that much pull, right?

via Second Thoughts: Archie decides to stay awhile (a year or two?) | http://www.mydaytondailynews.com.

A $4,500 bounced check may be a crime, or it may not be: Did it bounce due to insufficient funds, a closed account, or a stop payment? Did the maker of the check know that it was no good when he presented it? Circumstantial questions present themselves.

In cases like that, it’s not unusual for prosecutors to refer complaining parties to other means of dispute resolution, such as civil action for collection. Prosecutors have discretion about which cases they prosecute, as well, since their resources are not unlimited.

I’ve lived in other jurisdictions and wouldn’t be surprised if an unhappy food vendor got the same answer from prosecutors in other places, as well. In this narrow circumstance, I don’t think it’s an unreasonable act on the part of Mr. Heck.

It's Who You Know

Here’s another one: heard about TJ Ritchie III being prosecuted for theft from the BMV in the County Building a few years ago? Nope, it was never reported, and even though he had dozens of individual thefts before being caught, he got diversion from our ‘esteemed’ prosecutor Matt Heck. It was never reported in the paper. Hmm, how did the DDN miss this one? I’m amazed that it never made the paper, since rumors fly around the county building like wildfire. That’s how I heard about it, and verified it with a BMV employee. Would have been easy for the DDN to verify it, didn’t happen.