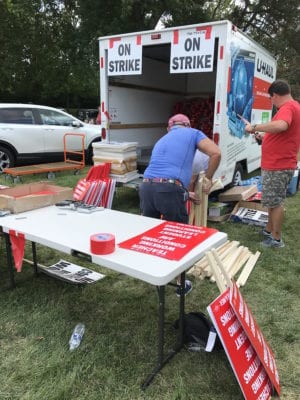 The teachers are prepared.

If I had a nickle for every time rookie superintendent Rhonda Corr said “It’s about the kids” we’d have enough money to fix Longfellow school, with some left over.

Of course, we don’t really know how much it would cost to fix Longfellow, all we have is hearsay, because fixing a historic building was never the goal of this Board of Education, because, well, Dr. Baguirov apparently isn’t in the construction industry on the side. Things that relate to his private businesses get done (helping CareSource- the largest Medicare provider in the state- helps pay Dr. B’s home health businesses, and the bus deal- he’s the guy with a trucking company that does business with the company that got the gold plated warranty deal).

This board that meets more times than any other public board, and gets less done, is criminal in its actions. They conduct business at “review “and “strategy” sessions- which seem just like board meetings- only they hold them in the room outside the board room- and don’t allow citizens to speak. This, is intentional- and wrong.

And when they do meet to conduct business- they allow Dr. Sheila Burton to present a one slide plan for revamping busing in the district- in JULY! With zero questions. They praise the cutting off of private day care providers and make speeches- only to reverse course after they learn what they are doing- because, frankly, they have no clue what they are doing- and neither does Corr, Burton, Treasurer Hiwot Abraha.

It’s this kind of lack of intellectual horsepower that has our district permanently checked in to the ICU as a major trauma victim. Switching bell times, this late in the season doesn’t work for all parents. Can you imagine if you have multiple kids at different bell times? Or, you have your daughter at Charity Early- which used to start at 9am and now is 7:15- meaning an earlier dismissal time- and now you have to figure out after school care? Or if your daughter will even be transported still- since the bus ride is over 30 minutes from your East Dayton home?

As we approach the last two days of negotiations on a contract with the DEA, not a single board member has stepped in to observer the “negotiating team” in action. They are depending on the word of Rhonda Corr to tell them what is going on in negotiations- the woman who showed up after a two month break without a proposal for the DEA. Read that last line again. She showed up, no proposal, and, is quoted in the media that she’s surprised that the DEA was going to vote to strike. She came out of the day long negotiation saying 5 things had been cleared off the table- according to DEA president David Romick the DEA didn’t sign anything- or agree to clear any item and he has no idea of what she’s talking about.

It was pretty clear yesterday that the DEA is tired of the incompetent leadership at Ludlow HQ. I walked among the teachers, as they gathered in solidarity at Triangle park, and told me story after story of what this failed negotiation process has cost the district. Half of the 5 star pre-school certified staff- has left. Not because they wanted to – but because the administration doesn’t seem to understand the program and what being a 5 star program entails. The latest news is that HQ is telling people who call- that DPS preschool is now a 5 day a week program instead of 4. Meaning that the things required to be a 5 star program- that are done on Fridays- can’t be done anymore. There are required meetings, training, reports, and lesson planning that is done on these days- and apparently, Corr doesn’t understand this. These teachers are truly teachers- with masters degrees and additional licenses, that’s what a 5 star rating entails.

On Friday, I spoke to a former DPS math teacher, male, younger. He’s now working at Trotwood. I’ve known him for around 8 years, as he used to teach my x-girlfriends daughters. He left, not because of pay, he didn’t even know how much he’d make more at Trotwood- but did say they honored all of his years, and step increases, but because he’s in the middle of a medical situation that he can’t afford to be without health insurance. If you know anything about HR in schools- male, math teachers, in pk-8 grades- are unicorns. One of ours, just flew away.

No board members attended the union picnic. Not even Sheila Taylor, supposedly the mouthpiece of local labor. John McManus blamed his job in Columbus for stopping him from going, but the rest, steered clear. How a board that works for the community, can be so out of touch with their staff is mind-blowing. However, many of the candidates appearing on the ballot in November to replace Ron Lee, Dr. Hazel Rountree, Joe Lacey and Dr. Adil Baguirov were there. 8 have already filed petitions (sadly, Joe Lacey is one of the 8) and the turn-in deadline is Wednesday Aug 9th. Many DEA members asked me to run, something that’s just not possible right now due to my responsibilities with my 89 year old mother with dementia.

The real question, with two negotiating days to go, is when will someone from the board step in to the negotiations to observe and see how their team is working?

The board has already spent $150K on Huffmaster to prepare for the strike- and has agreed to pay $200 a day per substitute strike breaker- and Corr has claimed they will have “Certified teachers in the classrooms” yet Huffmaster’s ad clearly doesn’t require it. There aren’t 600 unemployed certified teachers in this region, never mind Dayton.

This is why, the only sane move the board can make is to tell Corr if an agreement isn’t reached on Monday, she’s fired, and Dr. Burton takes over. If Burton, can’t negotiate a settlement on Wednesday, she’s fired and it’s up to Dr. Lolli to lead the district.

We’ve already lost enough students to charter schools, and when the strike hits- 5 days before school starts, and parents rush to enroll their kids in Charters, and funding drops again, we’ll be left in shambles. The only logical thing to do if an agreement isn’t made on Wednesday is to re-set the school year to begin in September, pending a settlement. Pushing forward with schools staffed with temps isn’t a viable solution anymore than maintaining Corr as superintendent. The damage she’s already done to the district can’t even be enumerated.

Because, at this point, it’s not about the kids- it’s about her competence.

Great article…the only exception is appointing Shelia Burton as superintendent. I won’t go into the reasons, but those who know her
understand the character attributes she lacks.

Welcome Mr. Whitefolks-
How else do we get rid of Sheila Burton? That’s why she’s number two- to go…

Thanks for mentioning preschool. The fact that they are even considering 5 days shows they have no idea what earning 5 stars entails. My biggest reason for leaving the district was not the lack of communication or respect, poor pay or terrible leadership, but was my belief that decisions were being made that would be detrimental to preschoolers with special needs. By the way, I am getting more than $10,000 more in a similar district. I feel so bad for our DPS families and students.

David, I suppose you are right about Sheila. I think she has played a significant role in DPS’ decline.

I appreciate your comments about David Lawrence. David had his faults, but he was very dedicated. He asked for your opinion and listened.

The only person left at DPS that has the aptitude and moral consciousness to direct DPS is Jyllian Bradshaw. Unfortunately, she is constrained by the superintendent and the board.