The “primary” election on May 7th for the Dayton Mayor and City Commission positions isn’t a primary- it’s a run-off election, to narrow the field to two candidates for Mayor and four candidates for two city commission seats. This means one candidate from each race will be left out.

Typically, primaries are held for political parties to select their representative- and this is where you declare your party affiliation in the State of Ohio, by asking for a particular party ballot. There is no “independent” status- but you can ask for an “issues only” ballot at elections where there are levies and primaries going on. Dayton hasn’t had a “run-off election” in so long, since the Board of Elections manages to stop most candidates from getting on the ballot- thanks to the Dayton City Charter requirements for 500 signatures and a form that only the IRS could love.

The Dayton Charter calls for “non-partisan elections”- no party affiliation shows up with the candidates’ names. The charter also calls for the city to run the election, but they sub-contract it to the Board of Elections- which is a very partisan organization. Things get confusing to most voters when they hear  about the Board of Elections, because most of them never come into contact with them other than when getting mailings telling you your polling place has changed (again).

There are 4 people on the Board of Elections- two Democrats and two Republicans. They are paid $20,000 each a year to attend 2 meetings a month, to oversee the actions of the “Board of Elections” staff- which consists of equal numbers of Democrats and Republicans- where there are one of each for every position so as to have a “check and balance.” However, all of these jobs are reserved for “friends of the party”- they are patronage jobs, pure and simple, where relatives of our elected representatives get well paying jobs just for who they know. We’ve even hired convicted rapists without a job application.

These are the people we trust to run “fair and impartial and honest” elections.

Recently, the Democrats on the Board of Elections, Dennis Lieberman and Tom Ritchie got fired by the Secretary of State over protests of his limiting of early voting hours. The Democratic party convened, and appointed John Doll and Rhine McLin to the board.

Yes, former Mayor of Dayton, Rhine McLin, who lost to Gary Leitzell by less than 1,000 votes, despite outspending him 6 to 1. She also was part of the team that conspired to keep William Pace off the ballot, despite having 650+ valid signatures, by holding the validation meeting after hours, on the day of the deadline, for him to sign a single form to accept his candidacy. Steve Harsman, who is the Dem director for the BOE- who is paid in excess of $110,000 a year, also sits on the Montgomery County Democratic Party Screening Committee- where one of the questions of all candidates is always “If we don’t endorse you, will you run against our endorsed candidate?” Remember, the purpose of a “primary” is for the party to pick a candidate, not just the party elite.

So when William Pace pointed something very obvious to me out today, I, like you, should wonder what kind of fair and honest election can we count on in this primary? The reason: 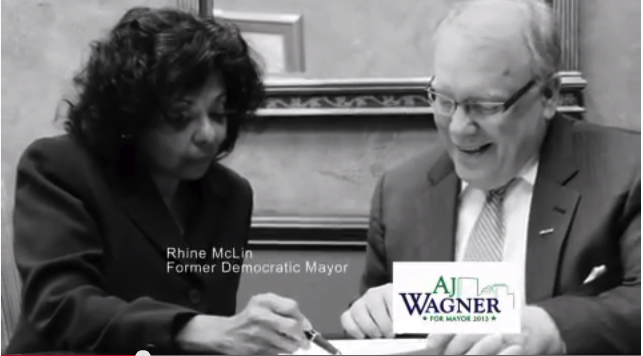 How can Rhine McLin be expected to provide nonpartisan, unbiased, supervision of an election in which she appears in ads to support a candidate? Is this a “nonpartisan” election anymore?

I’ve called for an elected “Chief Ethics Officer” in the county, if we have to elect a coroner and a county engineer, why not? If we had one, this would be a case worthy of investigation. If I was Gary Leitzell, I’d be asking for oversight on this election from outside this county, with the huge amounts of money A.J. and Nan have raised and spent, what’s stopping them from buying off some election officials?

The political machinations of Dayton, OH resemble those of many third world nations.

What’s really sad is the money spent on salaries for the two top employees at the Board of sElections. The Ohio Revised Code calls for only one Director at the BOE but Montgomery County pays for two at $110,000 yearly plus OT! Other employees who are connected to the party chairman’s are paid well and are required to donate to their political party. Poll workers who have not received a pay increase in years are required to learn new voting regulations almost yearly and work long hours while the Directors at the BOE have received increases in pay and OT. Why not pay for more training and better qualified poll workers and other tools that would improve the quality of our elections, not patronage jobs through the political parties!

“Major parties have lived more for patronage than principles; their goal is to bind together a sufficiently large coalition of diverse interests to get into power, and once in power, to arrange satisactory compromises of interests to remain there.”
Richard Hofstader

[…] Nan is the one making empty promises. She has served on the Dayton City Commission for 7.5 years. The first 4 years, she had 4 other supporting votes to do anything she wanted. The last 3.5, she lost her best friend, Rhine McLin, when Rhine lost by less than 1,000 votes to Gary Leitzell, who was a nobody with no money from the neighborhoods. The fact that Rhine’s campaign manager was the same fool that is running Whaley’s campaign shouldn’t be lost on most political insiders. Not to mention that even Rhine, whom Nan and her pals in the inner circle of the Montgomery County Democratic Party put into … […]

Wouldn’t an elected Chief Ethics Officer be considered a judge?

@Nahla – welcome. A judge requires a court- and filing of legal briefs. A Chief Ethics Officer in an investigative office, that takes complaints and pursues their validity- and then advises public officials, who are often shielded from liability in the courts, to take corrective action.

What happened Tuesday, and why the public doesn’t understand, doesn’t care and doesn’t benefit

[…] want to affiliate himself with a party. That’s why I posted this post a few weeks ago: “Election Questions That Need Answers” to provide answers to voters who don’t understand the […]