“Too many politicians make empty promises on the campaign trail, but at the end of the day, are just like the rest- only out for themselves. But in the election for Dayton’s Mayor, we don’t have to settle for the same old politicians.”
~Nan Whaley’s latest campaign mailer that has photos of A.J. Wagner and Gary Leitzell on it- calling them “as typical as they come.”

Nan’s claim is that she is different- that she voluntarily cut her own pay. Total garbage, every city employee has agreed to pay freezes and has accepted furlough days, to help the city make it through the economic downturn, caused by people just like Nan- the politicians who sell out to the highest bidder. Nan is different than any other local candidate, in that she has fund-raisers in Columbus, and pulls money from Washington, D.C., types to fund her non-stop blather about how she’s a “Mayor for Dayton’s future.”

Let’s be clear. The upcoming election on May 7 doesn’t pick Dayton’s Mayor- it just cuts the field by one. Polls have shown that Nan comes in third, which is why she’s blowing through her ill-gotten campaign treasure chest like a drunken sailor. This was the sixth mailing I’ve gotten, and I got wind of a mailer that was targeted to West Side voters last night. I’ve also gotten two robocalls, including one from her buddy, Senator Sherrod Brown, who couldn’t find his way from Brown Street to Warren Street without GPS. 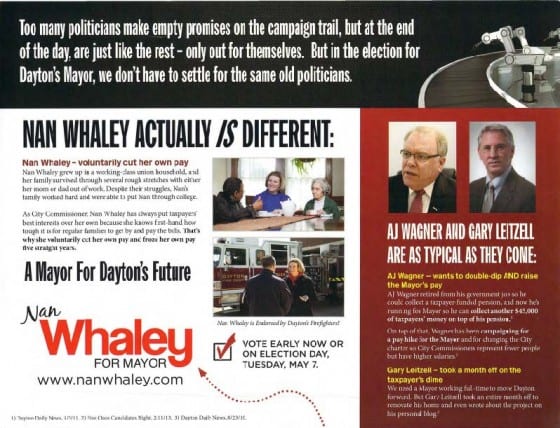 Nan Whaley doesn’t have a plan for Dayton, she has a plan to smear anyone else in her way. Click to download full PDF.

Nan is the one making empty promises. She has served on the Dayton City Commission for 7.5 years. The first 4 years, she had 4 other supporting votes to do anything she wanted. The last 3.5, she lost her best friend, Rhine McLin, when Rhine lost by less than 1,000 votes to Gary Leitzell, who was a nobody with no money from the neighborhoods. The fact that Rhine’s campaign manager was the same fool that is running Whaley’s campaign shouldn’t be lost on most political insiders. Not to mention that even Rhine, whom Nan and her pals in the inner circle of the Montgomery County Democratic Party put into office on the Board of Elections, is backing A.J. Wagner in his TV spots.

Nan’s own best pal, is backing Wagner? In terms of “same old politicians” – A.J. has been in office for 20 years, with the former backing of the Democratic Party inner circle, Nan has been in office for 8 years, with at least 4 years previous sucking at the teat of Democratic party patronage with jobs in the county building, on the board of elections and being an employee of the Montgomery County Democratic party. Her husband also works for the county making this “power couple” make over $1,00K a year. A.J. may be “double dipping” according to Nan, but the fact is, he paid into his retirement for over 20 years and is drawing it legally. Notice, she doesn’t mention that her running buddy, Jeffery Mims would be doing the EXACT SAME THING.

Our poor mayor, Gary Leitzell, whom she accuses of taking “a month off on the taxpayers’ dime” to “renovate his home”- has been a politician for only 3.5 years, making him the “least of the same old politicians” in the bunch. Let’s also be clear that the Mayor’s “Job” is to attend one meeting a week. That means he missed 4 meetings? No, he missed one on vacation and was there the other 3- as compared to Dayton City Commissioner Dean Lovelace who has missed over a year of meetings, but is constantly given an excused absence by Nan, Joey Williams, Matt Joseph, and for a while, the Mayor, so that he can get to his 20-year mark and resign mid-term. He’s been on the taxpayers’ dime- and the bets are, that if Nan loses in the May 7 runoff election, Dean will resign in time for her to run in a special election to fill his seat, giving her a backup.

Also note, that Gary Leitzell has never had the benefit of having two other commission members to vote with him for his entire term, since the Democratic Party holds sway over the campaign money machine that Nan has a direct line to. Williams and Joseph both know where their bread is buttered, and Lovelace has to count on the others so he can retire. Nope, not a single free thinker on the commission other than Leitzell.

Nan Whaley is the most political animal in local Dayton politics. Her obscene campaign contributions, push poll and now, this negative campaign piece should tell Dayton voters all they need to know about Ms. Whaley- she’s only out for herself.

The commissioners would not take a voluntary pay cut when I first asked them to in early 2010 though in all fairness Matt and Joey were willing. However, when I recommended to the Compensation Review Board at their annual meeting in November 2010 that they cut our pay (you should have seen the jaws drop) and they chose to keep it level, well, it meant that the issue would come before the commission. We can either accept or deny their recommendation. To avoid the public discussion, the entire commission elected to voluntarily reduce their pay in line with the other city employees and did so for three years in a row. That is the story the other commissioners will not tell you …

Here’s why I like Dave Esrati: he is chronically disruptive. Dayton is sorely in need of disruption.
———-
Think of Dave as Dayton’s reset button. He is the CNTRL/ALT/DEL the city needs.

David, you mentioned polls showing her runing poorly.  Has there been polling on Mayor’s race?

@John Ise- She did polling, AJ did polling. I’m not privy to Nan’s polling- but, AJ’s poll said AJ, then Gary. She wouldn’t be spending like a drunken sailor in the primary if she didn’t think she needed to.
I got YET another mailing today.

40 something thousand for a part time job……really?
over 100,000 raised for said job….cause she couldn’t get the message out….Please!
Gary put out a challenge….and stuck to it……WONDERFUL!!
Im voting COMMON SENSE!!!
GO GARY, DAVE and DAVE!!

What the big money in the Dayton “primary” meant

[…] Neither Joey Williams or Jeff Mims did much buy ride the coattails of the Whaley machine, counting on her GOTV (Get out the vote) machine and their inclusion on an early mailer and the Endorsed Democratic Party Slate card that she also sent out. Since both actually did better than Whaley in actual votes, it will be interesting to see how much more they campaign and what will happen when the Whaley and Wagner campaigns start trying to differentiate their positions. […]