Interim Superintendent Libby Lolli likes to show projections of declining enrollment predicted by consultants as the driving force for “rightsizing” the district.

Don’t believe a word that comes out of her mouth.

If you want to know why enrollment is dropping, and will plummet after her grand plan is implemented (if it even can be) is that the parents are tired of being shuffled around like playing cards.

I’ve said it before, the enrollment drop started when outgoing Superintendent reconfigured buildings at the last minute to create the three middle schools. Parents at high performing K-8 Schools like Horace Mann, Eastmont, Wright Brothers, Eastmont, Valerie were unhappy about having to send their kids to the three new middle schools: Wogaman, EJ Brown and Wright Brothers. Then we added 7-8 to Belmont and Meadowdale HS. Then, the next year, we went to 4 bell times- screwing with bus times for parents with multiple kids in different schools. No warning, no planning, no discussion. You could have to get kids ready at 4 different times. Hello?

Lolli obviously likes Junior High Schools- because she’s willing to gut both the Girls academy and Dayton Boys Prep- by scrapping their 7-8 as well.

The only school and parents she’s wise enough to leave alone is Stivers.

But, that’s only half the crazy-train.

Obviously, Lolli doesn’t understand how we managed to lift the deseg order- with open enrollment. Now, she’s going to start by closing Valerie Elementary- move it over to the Meadowdale elementary building, rename it Valerie, and then scrape Valerie. OK- no problem with that- except, she’s going to tell Meadowdale parents- you have to send your kids to the building closest to your home- while, not? telling that to Valerie parents? Can we say discrimination? Or, tone deaf? Take your pick.

We knew from the get-go that Valerie was a goner- it’s the oldest building in the district except for Stivers- that needs major renovation. And, closing it isn’t the end of the world, nor is the middle school plan- except that it probably guarantees losing at least another 500+ students overnight to charters or moving out of the district or vouchers.

CJ is saying THANK YOU very much.

But, the other moves- closing Jackson Center, which the district just reopened to move the Longfellow kids to, is a flat out handout to the Dayton Metro Library who just found out the people who own the former Delco site across the street aren’t giving them the land for free. $50K an acre hurt their pocketbook too much– so they’ll just move across the street to Jackson Center site- and pay to scrape the building for the district. Remember, library director Tim Kamblitsch was on the task force… now you know why.

The other plan is to move HQ from Ludlow 1 to Ludlow 2. Ostensibly, this is because Ludlow 1 needs $2m in HVAC repairs and is too costly to maintain. Sheila Taylor was almost in tears about losing the “community room” – board room, which DPS employees built with their own hands. Hint- you wouldn’t need such a big room if you didn’t keep screwing up and causing the entire community to come down to scream at you.

Moving the 150 odd people across the street will still have costs, but, don’t worry, just like Jackson Center, they’ve got someone who wants that land and parking lot behind the building… can anyone spell S-I-N-C-L-A-I-R. I can. And you can bet your last dollar that they get it for a steal. As to parking for DPS staff, don’t worry- the district owns the lot down Ludlow past 3rd Perk and the old Avenue Lounge- a block away.

And, we’ll move the 20 or so hard core troublemakers who were doing drill and fill online “learning” as an alternative to suspension, into Ludlow 2 with the HQ staff should keep things interesting. Considering Ludlow 1 implemented key card access on the elevators to the upper floors- for security, how wise is it to bring our most troubled kids into the HQ?

Speakers at the meeting tonight all got to talk as long as they want, except me. Rev Harris thought he’d try to infringe on my 1st Amendment rights and interrupt me and called for my removal. Director of Security Richard Wright made a show of coming out to do Harris’s dirty work, but as a former Dayton Police Officer who knows the law, and knows my record on winning lawsuits, didn’t take it past belly bumping. Kudos go to new School Board Member Jocelyn Rhynard for stepping up and saying she’d like to hear me out, and that I should have the right to speak. A teacher told me that Al-Hamdani also said something to that effect, but I didn’t hear him. Rhynard scores points. McManus, who should know better just sat there like a stupid caricature from central casting as a stuffed suit. Very disappointed in the man who wanted to be president and is vp.

Standing in the back of the room was Brian Wildermuth, the board lawyer who is managing my case and billing them out the wazoo. He was probably there to meet with them in Executive session to discuss his loss in the former treasurer Craig Jones case. The board will have to decide to appeal, to pay Craig, or to hire him back. Wildermuth will tell them to appeal so he can keep milking his cash cow. 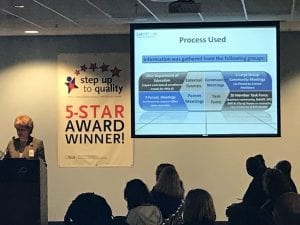 Judge Skelton set a hearing in my case for Thursday at 3pm. The only two issues to be addressed will be is the task force a public body that had input and did they have a secret meeting. Considering Lolli put up slides including the task forces input, the first issue is now resolved. The second issue has video tape- and unlike the tape of the Dunbar Thurgood brawl, this video is crystal clear. Wait for the ruling that they violated the Sunshine laws- and then apply this rule to the issues of “Right Sizing:”

The rule shall provide that any person, upon request and payment of a reasonable fee, may obtain reasonable advance notification of all meetings at which any specific type of public business is to be discussed. Provisions for advance notification may include, but are not limited to, mailing the agenda of meetings to all subscribers on a mailing list or mailing notices in self-addressed, stamped envelopes provided by the person.

They will fail the above tests, and the whole process will be dead in the water. And the question is if the next level penalty will be applied:

(4) A member of a public body who knowingly violates an injunction issued pursuant to division (I)(1) of this section may be removed from office by an action brought in the court of common pleas for that purpose by the prosecuting attorney or the attorney general.

It is my hope that Open Government Unit of the State Attorney General decides that the actions of the elected officials who continued to meet, despite multiple warnings, warrants their removal and Mohamed Al-Hamdani, Jeff Mims, William Harris and Robert Walker all find themselves out of office.

I love conspiracy theories from disrespectful individuals who like the sound of their own voice. If you spoke for longer than three minutes, your time was up and they were within their right to ask you to to step aside.

It’s almost like we were at two separate meetings tonight. I would encourage people who read this man’s perceptions of life to, again watch his interaction with a library security guard (don’t forget to subscribe to his channel of course), and to attend these meetings because his recollections via his Facebook or blog are not the same thing as being their in person.

With as critical and demonizing of the DPS administration as Mr Esrati has been, I assume thaT he has plans to present that will increase test scores, increase enrollment, and increase educator retention, as well as increase parent engagement and satisfaction.

I’m very eager to read your detailed report of how to solve these problems. I’m also eager to see Mr Esrati run for the school board, as he so eagerly pointed out that he “wins” lawsuits, I should assume he should have no trouble winning a simple school board election, especially since he claims to speak the truth.

David Johns, I can assure you that David Esrati had not spoken for three minutes when Rev. Harris brought the gavel down and tried to have him ejected from the meeting. Esrati’s remarks were on topic, but not what Rev. Harris wanted to hear. Other speakers, incidentally, were allowed to go over the 3 minute time limit.

First, an obvious question to which I have not yet seen an answer: upon what basis did Rev. Harris request your removal? Did you indeed exceed your 3 minutes as naysayer Johns describes here, and the Rev. was practicing selective enforcement? Or was there a legitimate reason for not giving you your time, and if so, what reason was given? Remember, you have already proven with a video and clock that your time has been arbitrarily shortened previously.

Then, a couple of comments: it is very interesting to note the connection between proposed closures that make no sense other than the desirability of the properties by others involved in the decisions. I’m quite sure “Her Whaleyness” would love to bonus Sinclair yet again with plum property, and I also find it odd that such a “task force” would include the library director, Tim Kamblitsch, unless there was an outside interest such as you describe. I don’t see that as a “conspiracy theory” as hinted by Mr. Johns here, but rather as legitimate probing from a concerned citizen. And that brings another comment: in reading naysayer Johns’ comment, it’s quite obviously full of “ifs” and opinions of questionable value, most of which have no basis but are designed more to deride than illuminate. (It becomes especially obvious when conflating this very important issue with the far lesser issue of misconduct by a brownie cop at the library and your very justifiable response to him.) If the man cannot stick with the issues around the “rightsizing” proposals and obvious illegalities being committed by this group while refraining from the meaningless ad hominem attacks, may I respectfully suggest he create his own forum elsewhere and find out how many care to waste their time reading those opinions? I’m here to read about the DPS issues, not his unfounded personal opinions of an honest citizen acting in the very manner of which our Founding Fathers would obviously be quite proud!

Thank you for continuing to connect the dots for those who are unable to attend meetings as regularly because of work obligations. Kudos to your research and analysis.