Abbot and Costello had a skit about funny names in baseball called “Who’s on first” and while it was funny, the Dayton Public Schools rendition tops it in complexity and isn’t funny at all.

The players? three Powells, a Pullen, a Baker and a candlestick maker (actually two principals, Ms. Phillips – Dunbar,  and Ms. Walter, Belmont). Throw in a Bullens in a China store and the whole thing becomes more complex than it has to be.

While we already published Director of School Security Jamie Bullens report on the ineligible player and the OHSAA findings, we are still waiting for the transcripts of Mr. Bullens initial interviews, which were conducted individually, soon after the initial Belmont/Dunbar thrown game attempt. 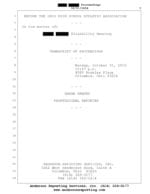 What we have for you today, is transcripts of the two visits to the OHSAA board. The first, is right after the game, on Oct. 31, 2016. The second, is on 27 Feb, 2017 which also had Mr. Bullens in attendance. The name of the player has been redacted.

They read like the skit- “who’s on first.” At one point, even the stenographer gets confused with all the Powells and starts referring to one as “Dr.” and another is Uncle Albert.

There was also a bit of finger pointing- since the Belmont principal accessed the district system to check the eligibility of the Dunbar player and was the one who informed the Dunbar Principal, who ostensibly didn’t know he was ineligible. At this point, no one had figured out that he had already played the previous week and was ineligible then. #FAIL

The coaches hadn’t played the player, but had let him dress for “team photos” the night of the big game. This was a mistake of convenience, and set the scene for the next screw up- which is being piled on District AD Mark Baker who supposedly came to the game and had started recalculating grades- something he, Pete Pullen and the Powells shouldn’t have been allowed to do.

It’s pretty obvious reading the transcripts that we’re dealing with athletes, not scholars. The grammar is abysmal. Why was it so important this kid play? Dunbar was winning without him. The answer comes down to either- because he’s got people looking at him for scholarship, or, (updated Wed May 7, 2017 after confirmation that this is not true from an informed reader. We drew this from the OSHAA transcript- but it was talking about the Powell’s relationship- sorry).

Either way, it’s clear that the Principals both said don’t play him, laying the blame clearly on the coaches, the building AD and the district AD. Who came up with the insane idea to lose the game to try to make this all OK- doesn’t really matter at this point. None of these people demonstrated the kind of personal integrity we’d expect from coaches. The kids grades sucked. He shouldn’t have been playing the week before, he shouldn’t have dressed, and the real question is why none of these people had been able to explain to him that there is no future for him in sports if he can’t get better grades.

We have to do better. Building AD Pete Pullen resigned from his AD position. That was the right thing to do. As to the Powells and Baker? Maybe we should use the Mark Baker solution to work things out- let them all fight each other.  (Baker let his basketball players fight at Trotwood- ending his coaching tenure there). 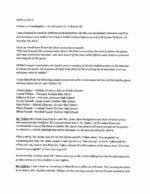 However, the smoking gun belongs to the former Dayton cop who heads security for DPS. Jamie Bullens did two investigations, and seemed to ignore the issue that brought the censure- the who told who to throw the game. Trough both his first report, he doesn’t  mention it. He seems to have not asked for the OHSAA transcript from Oct. 31st. And in his second report, to the board, because Joe Lacey seemed to miss the whole thrown game part of the sanctions, only having read Bullens’ first report- he again, barely scratches the surface of what the OHSAA transcript reveals.

It becomes clear his directive was to protect Baker and shift blame to the Powells and Pullen. It’s the Inspector Clouseau report- not the Magnum PI report.

In the meantime, “A. Powell” claimed to have a recording of Baker telling him to throw the game, but lost it after sharing with just a few people. The real question is did any of them save it- and will it surface next?

The Board rushed last week to extend Baker’s contract for two years. Soon after, the anonymous letter outlines plenty of other problems with Baker. Tonight, they unveiled their “Accountability Plan for Transforming DPS Athletics” which was presented by Dr. Winston. Board member Sheila Taylor practically fell all over herself to congratulate Dr. Winston and Mark Baker for coming up with this new system. It’s integrated with a new electronic HR system implemented by HR Director Judy Spurlock.

I’ll have it posted tomorrow. What else was revealed tonight is that there are conditions for employment that aren’t included in the publicly posted job descriptions. You have to actually login and begin the application process to find these conditions.

I just applied to be a coach.
Here they are, hidden behind a login:

You are required to fill out this questionnaire to continue with this request.

Why did the district do this? To not rehire the Powells and Pullen. Yet, Baker already had a 2 year contract previous to these restrictions being put in place.

There is no excuse for this.
Baker was the one who was trying to recalculate the grades mid-game, when the principal’s had already said no and the head coach hadn’t played the kid. Take him out of this equation, and none of this would have happened. 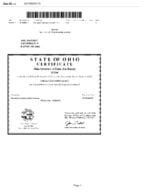 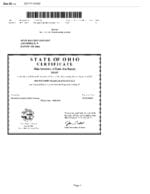 Factor in the other allegations in the anonymous letter- and a full investigation is warranted, but not by Bullens. It has to be an independent investigation at this point.

That the Board is adding these conditions, that they rushed to rehire Baker, all point to a lack of integrity that fits with their former actions- from the RIF, the real estate deals, the marketing contract, the rehire of Corr despite her poor performance, their inability to police their own member who doesn’t live in the district and then does the purchase deal on the buses despite his conflict of interest and then votes on it.

If you need any further proof that Baguirov is being given time to manufacture his defense- he’s now shut down two of his shell corporations since I  first revealed them in the post: International Man of Mystery: Adil Baguirov on April 5, 2017.

There is plenty wrong with this district, but the best explanation of it comes from the transcript of the OHSAA hearing in February- unfortunately, we don’t know if it is Albert or Alfred:”MR. A. POWELL: The district is broken.”
Abbot and Costello couldn’t have said it better.
If you enjoyed this post, make sure you subscribe to my RSS feed! If you wish to support this blog and independent journalism in Dayton, consider donating. All of the effort that goes into writing posts and creating videos comes directly out of my pocket, so any amount helps!
Subscribe
5 Comments
Inline Feedbacks
View all comments

David, while I do love you, your apostrophes are driving me crazy. No plural ever gets one. Powells are not Powell’s, that’s the possessive. OK? OK!

Truddick: Do you in your wildest imagination think grading David’s spelling is mightier than the content? I think not…

No Lzarry, I value content more than punctuation and grammar–but I value those things too, and there are some people who won’t respect a good idea if it’s presented poorly. We correct because we care.

You’ should have’ seen David’s’ dangling participle a while back… well, maybe it’s’ good you missed it’.

[…] The plan really looked more like a Winston/Spurlock (Judy Spurlock HR Director) creation than a Baker one. New was the magic word since apparently we’d been running the organization without job descriptions,  operations manual, protocols for OHSAA infractions/violations, employee monitoring or even financial controls. We’re going to create a new “Student Athlete Eligibility Warning System,” have mandatory study tables, a student athlete summer leadership symposium and a new 90-90-90 “non-negotiable rule for sports participation- which Dr. Winston couldn’t remember what it was. The new hiring process was highlighted- as were the board imposed conditions that aren’t visible until you start to apply. […]