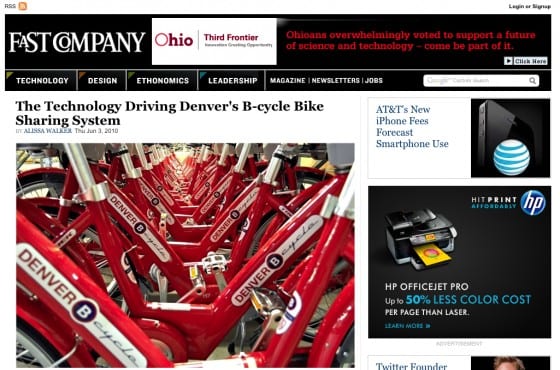 Being the story beats being the ad next to it.

We’re paying to advertise that we’re forward thinking and supporting science and tech- while Denver is actually deploying the future of green alternative transportation: B-Cycle.

If there is one rule about advertising- it’s that PR is cheaper and more effective than any ad campaign. So instead of buying ads talking- why aren’t we putting money into programs like B-Cycle?

One month after the Denver debut of B-cycle, the first large-scale bike sharing program in the U.S., over 3,000 Denver residents have burned over 1.3 million calories by pedaling away at the 400 bikes docked at 42 stations around the city.

We talk about being an RFID center- and yet, here is B-Cycle using RFID. We could have launched B-Cycle in Dayton around July 1, had the powers that be had any brains. We’d be mentioned in this good press- and Ohio would like leaders instead of followers.
Instead, we’re buying banner ads. Brilliant.

I think this is a great idea and fully support it for downtown, or even the malls for that matter.    It makes perfect sense in a major city like that, where a downtown trip make be a mile or more.

According to the article, the Denver model charges fees to use the bikes.   It is also supported by a number of sponsors.

I’m not sure the same model works here.  In Dayton, the core of downtown is only a few blocks in any given direction.    Except perhaps a route connecting to UD, most folks can easily walk where they need to go.    Even RiverScape to Sinclair or Oregon is easily manageble for the average person.    Any further, and you probably already decided to bike or drive anyway.

So I have to ask, are there enough people willing to pay money to ride a bike such a short distance?   If not, would it be better to invest in more walkable streets than bicycles?

Either way, it would be very cool to see in Dayton.

I have to say that if they wish to buy the bikes, we (at Tech Town) could easily integrate the RFID part of it. The kiosk and iPhone app would also be fairly easy to do. Calculating calories and carbon emmissions is nothing.

Personally, I don’t see this as a business model that will work in Dayton as an urban getaround regardless of the technology it uses. What might just work is putting these in the suburbs along various points in the bike paths. (one at Xenia Station, Beavercreek Station, Yellow Springs Station, etc)    A few burning questions are:  Why would people not just go to wal-mart and buy a bike for $50? How many people would actually use it?  Who would pay for the initial cost?  Not insurmountable, but tough

@Steve You aren’t getting the point of bike share- it’s an extension of your transportation system- not your actual transportation system. There are 20K students at Sinclair afraid to leave campus because they’ll lose their parking space. There are 10K students at UD who don’t have bikes- and parking is at a premium. Premier Health Partners has buildings downtown and at MVH- bikes back and forth work well.

It’s about having a bike available anytime- not having your own bike with you. And don’t tell me about our seasons- Denver has more snow than us.

I must also add that the hangup here has nothing to do with Technology. This bcycle is apparently a private firm making their own investment in a business, not something the government is running.  It will really be worth looking at if they manage to turn a profit and spread to other cities.  It’s like a Redbox for bikes.  Although here’s a question: If I rent a bike and it gets stolen, are they going to charge me $1000?

@Steve – if you loose a bike- there is a way to find it. However, yes- you will be responsible for it. It has it’s own lock- and should be returned to a station instead of being locked elsewhere.