And in Dayton Ohio, we used up our quota sometime before 1950, because, frankly, up until then we were on a roll. Inventions poured out of this little city. The cash register, the airplane, the step-ladder, the electric starter and even ice-cube trays. We had a few hits after 1950 like the pop-top and the search engine, but, generally, we ran out of gas.

We did stupid things like slice through downtown with a big elevated highway, and we allowed sprawl like no-ones business (actually- it was great business for a few people in power who profited greatly from insider knowledge), and we let our racism tear this city apart.

That all happened before I got to town and pissed off the powers that be by putting up the wrong kind of garage doors on a garage that came with a $14,500 house. Yes, a house that cost less than a parking spot in NYC for a year. That was the beginning of the attempt to tame this wild new thinker in Dayton.

I’ve been called names, I’ve been assaulted by a Mayor, arrested by another Mayor, I’ve been called a pedophile by a Union Chief- who also picked a fight- and then as I got out of my car- slammed the door on my leg. I’ve had my house shot, my office windows broken 2 nights in a row, I’ve been threatened with bodily harm, and had microphones shut off as I spoke at public meetings. I’ve been thrown out of libraries, locked out of public meetings and written up for peeling paint. I think I’ve even been falsely accused of double dipping my chips.

However, the internet has given me a chance to speak and be heard. I’ve broken stories of illegal campaign donations, payola to our congressman’s wife, torture and deaths in the jail and international men of mystery pulling a fast one on the hapless school board and then the Republican party.

But, when it comes to being recognized as a legitimate voice in the community the door has been slammed shut. For the first three years I applied to be a speaker at TEDx- and rejected. 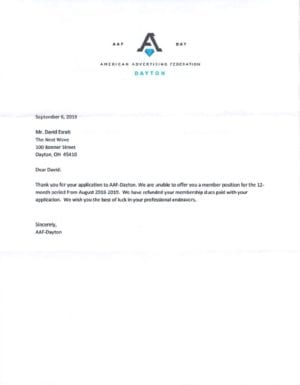 Thrown out of Ad Club

And yesterday, I got told that my slides were too political, and we can’t have you speak at Pecha Kucha this Thursday night. Yep, talking about hanging basketball nets instead of putting out political yard signs is too risque for PK. Then the mail had an unsigned letter from AAF Dayton, formerly known as the Dayton Ad Club. My membership dues were being returned and I wasn’t welcome as a member. I’d been a member of the club for at least 25 years, but chose to join Cincinnati last year after they gave the Silver Medal to a guy who just showed up in town about 7 years ago. Hell, he barely made it to the meetings. So much for years of volunteer work, community contributions, and actually hiring people and giving them their first jobs in the business.

Now a few friends have said things like, you know, if people keep telling you that you have a tail, at some point you might want to look back and do something about it.

To them, I say, sure thing. I’m sure that people told Rosa Parks, “Lady, look, just go on to the back of the bus and don’t make no stink, Whitey is awful nice to even let us ride on their buses with them”

And, others told Martin Luther King, to just stick to the bible and preaching, all this marching and rabble rousing will just get you thrown in jail or worse.

How do I know that? Here’s the opening of his letter, from the Birmingham jail- I’d highly recommend reading the whole thing.

While confined here in the Birmingham city jail, I came across your recent statement calling my present activities “unwise and untimely.” Seldom do I pause to answer criticism of my work and ideas. If I sought to answer all the criticisms that cross my desk, my secretaries would have little time for anything other than such correspondence in the course of the day, and I would have no time for constructive work.

So, since I won’t be able to take the stage on Thursday to talk about “The Long Game of Basketball Net Propaganda” at PK- here’s the banned presentation- please share it with everyone.

And if you’re wondering about my other 2 PK presentations

And when we stop sharing ideas. We’re broke.

Yes, from garage doors to PK, its ALLLLL just a massive campaign to thwart you. Surely that’s the most likely option.

We’ve known you overvalue your own impact and importance but at least today you’ve finally come out with it. Unfortunately, despite the parallels you’ve drawn here, you’re no MLK or Rosa Parks.

Thank you Mark- and Larry- that’s a very nice quote.
As to “Bob”- welcome. I don’t really give a rats ass to what people say about me- or think. My neighborhood- which I’ve worked on with my neighbors for the last 33 years- is doing great compared to the rest of the cesspool managed by the Nan’s friends and family.
And- unlike you- I’ve actually contributed to the community- watch the net PK- oh, and, go fuck yourself.

The reason for this treatment is you often act like an asshole in public. Wearing a ninja mask and flipping people off at a public meeting gets you branded a jerk and is hard to live down. You’ve done a lot of good, but you conduct yourself in public like someone unhinged. You reap what you sow.

Dave does a lot of good for Dayton.

But the good that he does outweighs the occasional ninja mask, raised digit, or expletive.

Sorry, Dave, don’t buy your position re PK. They’re a private outfit providing a public forum. As such, they’re free to make the rules they want to make. Don’t like it? Start your own PKish forum with your own DE rules.

Also, can I point out that, of your 20 slide presentation, that said ok to 19. !*19*! That’s 95%! You won. But then you didn’t. Because it wasn’t perfect, it wasn’t 100%. They compromised with you (really, gave you almost everything you wanted), reduced the slides they had questions about to 1. But you walked away. And lost access to a large room of engaged folks who might have been into your overall message.

As Sheriff Taylor said to Deputy Fife, “Well, it’s your own fault, Barney”.