The murder of George Floyd was a heinous crime. There are protests globally, and riots locally. They will not stop until there is justice and a new plan on how to deal with police acting as judge, jury and executioner.

If you are a police officer, you should be thinking twice about facing down protesters wearing military gear. You are in effect, siding with the four criminals who have disgraced your profession and set it back 50 years.

While many of us saw bits and pieces of cell phone video, the real journalists at the New York Times gathered together security camera footage, cell footage and synced it to the police calls. The evidence is clear, not only should all four officers be in custody, but the people who filmed, who asked the cops to stop, should be seen as heroes. This is painful to watch. And, remember, this is over passing a counterfeit $20, barely a misdemeanor crime.

What is the answer now? And if you are a police chief, what do you do?

Chiefs across the country should immediately condemn the conduct of these officers and admit that they have tarnished the badge for all. There is NEVER an acceptable reason to use a knee to a neck of a person already in restraints, especially one who had already been in the cruiser. They should apologize for the outcome, and realize that their credibility as officers of the peace, has forever been changed. No justice, no peace.

They should ask that their officers join the protests. In their dress uniforms, not in battle dress. To show solidarity, to have conversations with the public about how we have to work together to solve this problem. To earn respect of the public, you need to give respect to the public. In addition, since we’re still in the midst of a pandemic, we don’t want to cause more death of the innocent, so let’s help them protest safely, in large areas, to march in the streets, together with civic leaders, religious leaders, educators- now, is the time when we are truly all in this together. Until we have a plan, and take meaningful actions to stop this from ever happening again, we may not have a functioning society again.

It included creating a national police misconduct registry, incentivizing states to adopt policies banning the use of chokeholds and reforming a legal doctrine known as qualified immunity that shields police officers from being held legally liable for damages sought by citizens whose constitutional rights were violated.

It’s also time to disarm. No more military surplus sales to police forces.  See above story and find out that Rand Paul, a right wing republican is backing it. And, no more private police forces as well. We should have instituted that after Samuel DuBose was shot and killed by a University of Cincinnati police officer on a traffic stop.

The change at the top

Inciting violence used to be a crime. It needs to be again, and when it’s coming from the President of the United States, he has crossed a boundary that should not ever be crossed. That there are people in congress who are a co-equal branch, can’t seem to understand that the executive branch has lost it’s marbles says they need to be evaluated as well as accomplices in the crimes. Just like the officers who stood by and did nothing to save George Floyd. 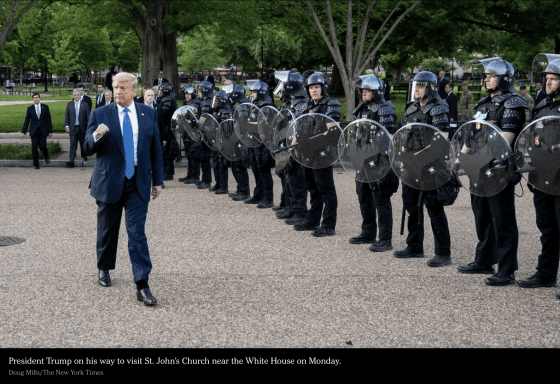 NY Times Photo of Trump and his black shirted police escort to churchTrump is off his rocker. He’s talking about “dominating the streets” and ignoring posse comitatus and the rule of law to enforce his will, against the people. He tear gassed peaceful protesters yesterday outside the White House so he could walk to a church, not to pray, but for a photo op. Those police officers should have said “No, this is America, we don’t do that.”

He declared “the destruction of peaceful life and the spilling of blood is against humanity and God” – while ordering the Army to deploy an active duty military police battalion for Washington. He’s declaring war- unilaterally, on the American people, while Congress sits by and does nothing. The entire world is outraged over the death of George Floyd, and before Trump spoke to the public, he chose to call Vladimir Putin (I can’t make this stuff up).

We’ve had police arrest journalists as if the first amendment didn’t even exist. A CNN crew was broadcasting live at one point, when they were arrested. This isn’t America anymore, it’s something else.

When Trump ran for office he talked about “Making America Great Again”- the only problem was, it was meant for after he destroyed it by conning Americans into believing he had any talent relevant to running a country. We now know he does not. It’s time to forcibly remove him from office, at any cost. This is what he wants, a civil war. He thinks he’s going to be a martyr, when in fact, he’s the devil.

To live in a United States again, we need to stop allowing one man and his cronies in Congress to continue to divide us.

This is the United States of America, and we will be united once we see justice for George Floyd and the removal of the despot in chief. A change is gonna come.

To the good officers who swore an oath to serve and protect, to the military who swore the same oath I did when I enlisted: “I, _____, do solemnly swear (or affirm) that I will support and defend the Constitution of the United States against all enemies, foreign and domestic; that I will bear true faith and allegiance to the same; and that I will obey the orders of the President of the United States and the orders of the officers appointed over me, according to regulations and the Uniform Code of Military Justice. So help me God.”

It’s time to defend the constitution. The domestic enemy is the president and those in congress who refuse to do their jobs. Please do yours. We can’t start killing each other because Trump wants us to. Remove the cancer, and let’s work to heal together.

Hi David, what are you going to do about all the violence and businesses being smashed up? Victoria Theater, College Football HOF, CNN headquarters, etc. Is it okay for cops to just TASE those who get out of control?

@Joe- people who damage property still to to jail. However, if the cops show some solidarity with the protesters in decrying the damage 4 cops did to their reputation, we may not have those issues.
I’m starting to believe that those who are wilding- are either the klan and the nazis- or those that society has already written off.
As part of a UBI plan- not getting caught doing crimes- would be a huge deterrent. And a UBI might solve a lot of problems like passing a fake $20.