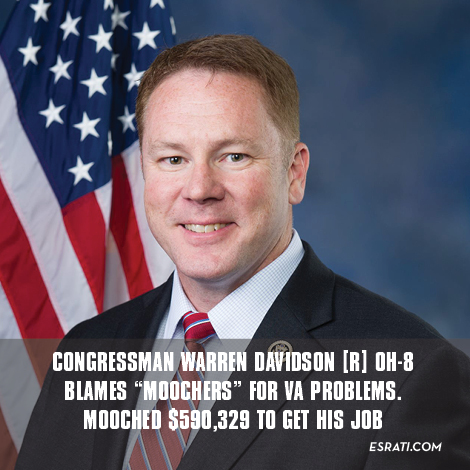 U.S. Rep. Warren Davidson hasn’t been in office for more than 3 months, and he started out with a great idea to help get the VA on track- force Congress to “eat their own dog food” by moving their care to the VA.

In today’s Dayton Daily news, Davidson just tried to redefine a legal description of what a veteran is. This bothers me no end, because I just had to battle the VA and their SSVF (Supportive Services for Veterans Families) program about the qualifications of a veteran to be eligible for services. It’s actually spelled out in law, one Davidson is sworn to uphold. Yet now, Davidson says the problems at the VA are caused by “moochers”

If I read this correctly, Mr. Davidson spent $250,000 of his own money, and mooched $590,329 from others, to get a job that pays about $178K a year. It comes with comprehensive health care coverage, retirement, an annual payroll in the millions, to hand out to friends, family, and donors. And, as we can see from the person he replaced, John Boehner, a guarantee of fat paychecks after you “resign” from the job- midway through, so Warren could take over in an easier election.