“Sexting” is one of those things that makes me laugh- about how out of touch our legislators are- and the lengths that they will go to distract us from real issues. Like the Wall Street Casino- the wholesale exportation of our entire manufacturing base and the failures of our system of elections that have created auctions.

But, now, we have the Army charging a soldier in a war zone for having pictures of a niece in a swimsuit- and then, changing their tune- but not disclosing the evidence:

The family of an Illinois National Guard soldier said Friday that he’s been charged with possession of child pornography in Afghanistan over innocent snapshots of a 4-year-old relative in a swimsuit.

The U.S. Army has charged Spec. Billy Miller of Galesburg, Ill., with possession of child pornography and a related charge of failure to obey an order that troops in Afghanistan not possess pornography.

We live in a society that is imprisoning people at an astonishing rate- and then doing everything possible to slap them with a scarlet letter for life. Sex offenders’ registry, criminal records that can’t be expunged- criminalizing kids sending pictures of themselves naked to each other.

At some point the State has got to stop. We can’t all be criminals- while the crooks in suits rob our country blind. I’d rather hire a guy who sold drugs to support his family over a Wall Street banker who is whining about his multiple house payments and sub-million dollar bonuses.

The whole issue of legislating morality is not much different than trying to legislate a national religion. It would help if the people doing the legislating actually had any moral credibility. Allowing companies to pay CEOs millions while firing people and expecting unemployment to provide a safety net is criminal.

To the case of the young soldier- I say the real criminal action is sending our people and tax dollars over to a third world country that has no interest in our being there- failing to catch Bin Laden- and watching our people go broke paying for this travesty. 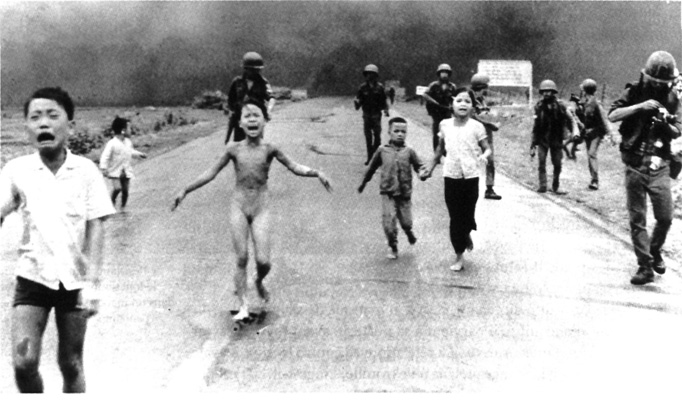 Associated Press photograph that won the Pulitzer Prize for spot news. It was taken by Nick Ut on June 8, 1972.

There is nothing Spec. Billy Miller could do with a picture that is near as criminal as what a country can do with your tax dollars.

David, you are wrong–we can all be criminals.
I think some of our lawmakers will not be happy until we are all in jail or are branded as sex offenders.  Seriously–and please forgive a slight diversion.  The idea behind a sex offender registry for serial predators made sense.  Now, if you are a 17 year old having sex with your 15 year old girlfriend, you are a registered sex offender.  For the record, I’m not.  However, the online sex offender registry (with interactive maps!) is completely useless because it lumps serial rapists with someone who got caught looking through someone else’s window 15 years ago.

The matter is in that people need to face the fact that the World finds young people attractive. Refer to Mr. Cullen’s revolutionary report on the issue. Mr Cullen is the World authority on that. Mr. Cullen’s report is found under the Suns Winnipeg thread under the Editorial Beware of Ignatieffs Common Touch. (Click the 2nd or third post) If you want to leave a comment click the Battle for free speech post and put one there. Read only the first 41 pages

How on earth did the paedophile hysteria get to this stage?Wow do we stop this hysteria?We need to stop this NOW!It’s killing and torturing normal people!