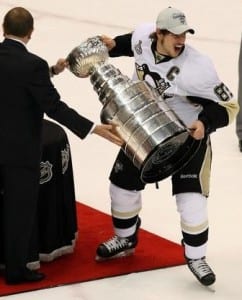 Flipped on the TV last night just to catch the end of the NBA finals. It was great that Phil Jackson now has 10 championships, I truly believe that man could coach any sport and deliver winners.

In the NHL, the trophy, which is an absolutely grand masterpiece of a trophy- is handed to the captain of the winning team, who then skates it around the ice- holding the trophy high over his head, and then they pass it to every player on the team, who does the same thing.

The NBA, hands it over to the owner, who didn’t even work up a sweat the whole season. What are they celebrating? Their investment? To make matters worse, Dr. Buss had his kids accept it. The “trophy” looked smaller than most bowling league championship awards. The “interview” of the team captain was inane.

4th paragraph – I think you meant NBA but put in NHL for the second word of said paragraph.

You often complain about the likes of Bill Nuti – what about OVERPAID athletes. They hire no one, are in charge of no one, get paid millions as kids – all for a game. The likes of Nuti generally work 20 to 30 years before becoming CEO. I hate CEOs and their salaries, but at least they have paid their dues and  have real responsibility. Athletes, well, not so much.

Athletes overpaid and often under educated. Know that is what we all should shoot for!

Thanks for catching my faux pas Gene.
Athletes are overpaid- but, have short careers. And, I don’t think taxpayers should pay for their sports facilities either- unless we get a big cut and they are used for other activities btw.

In all of sports and their respective championship celebrations, there is simply no comparison to hockey’s tradition of “skating the cup”.

And Gene, you are certainly right about there often being an inverse relationship– in our society in particular– between the value many jobs seem to have to society and the amount of money some people are paid.  But, on the other hand, athletes, actors, musicians, artists, etc. obviously provide things of value or people wouldn’t happily hand over their money to appreciate their work.  Obviously, many things in life transcend monetary value (to an extent) because they are valuable on a deeper level.   A serious study of all the Scrooge McDuck comic books helps illuminate this idea.

They used to play for peanuts…………… now $28 MILLION per year for a ‘roidstop (ok, I know he plays third, but he used to play shortstop.)

Ave salaries in all major sports are well over a million dollars per year. Ave player are not starter, for the most part. So a part-timer make a million bucks plus. Lot of guys TEN MILLION PLUS, per year. For a game?

Actually, I support the free market and what they make – I am just trying to make a correlation between CEOs who get slammed and athletes, musicians, actors, etc who rarely get slammed.

The Simon guy make like a hundred mil a year.

Then they get endorsement deal that even make them more money after they get the fat salary. Nuti ain’t a pitch man for anyone, including NCR if you know what I mean.

We weren’t just watching the NHL championship with the most treasured trophy in all of sports at stake, but a coronation as well. Syd the Kid Crosby wrestled the crown away as the best in the game, and against my beloved Red Wings no less. These are real tears flowing the face of the old Bandito. Over 30 years ago the Ice Bandit ventured to Indianapolis for the very first event in the brand spanking new Market Square Arena to witness if the rumors about a 17 year old named Wayne Gretzsky were true. Three decades and a rewritten NHL record book later, we are witnessing the emergence of an athlete who may surpass even The Great One in talent. So I dunno, Gene; are athletes overpaid? Syd Crosby may not be getting paid enough………………..

Also, they used to play for peanuts (again) and people still loved their Yankees and Buckeyes and Reds and Music and Movies. The more money involved has not enhanced the love of anything (in regards to this topic.)

In fact, money may have hurt – A-Roid, the “student-athlete” , cheating scandals, gambling scandals – all this actually has made sports worse, and it may have existed all the time but it has become much more prevalent the last 10-20 years , all in the name of money.

Sid Crosby’s career could end in an instant. That’s always been the rationale for overpaying athletes, so they have something to fall back on in their retirement. Unfortunately, owners with deeper pockets lured away the better players away, so other teams raised salaries to compete. The end result is that they stick it to the fans. $85 and up (way up) for a reasonable seat at Nationwide arena. (Yes, there are cheap seats, but what you get there is ambience, you need binocs to see the game.) Professional sports are going to price themselves right out of existence if the madness continues.

Sid, btw, is in trouble these days. Seems he was too busy giving interviews after the game (a good reason to keep the media OFF THE ICE until the important stuff is done) and missed out on most of the ceremonial handshake line – up, including shaking the hands of Marion Hossa and Henrik Zetterberg. Poor form, Sidney, poor form. Still, he’s a likable fellow, no doubt he’ll be forgiven. It was quite a series except for that 5-0 embarrassment in Game 5.

Crosby did not shake hands with the Redwings. That kills any comparison to Number 99 (Gretzky).