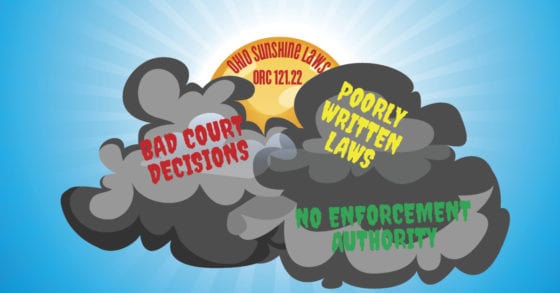 There will be no sunshine in Dayton.

Apparently, the Second District Court of Appeals still believes that it is the responsibility of those locked out of public meetings to prove that “deliberations took place” in a meeting they weren’t allowed to attend, observe, record.

This is the polar opposite of what everything that is explained in the “Yellow Book”- a 250 page guide to the Sunshine Laws published by the Secretary of State. My original filing was about multiple violations of the sunshine laws- which include even the threat of closing a meeting as a violation of the laws, as well as a whole bevy of other rules like providing agendas and publishing minutes. What they and Judge Skelton seem to be laser focused on is just the fact that the school closing task force bus tour was my main complaint. It wasn’t. It isn’t. And, it was held illegally- since they locked me out, denied cameras, recording devices, refused to tell me when it started, didn’t publish minutes and a whole bevy of other issues.

And now they’ve written a huge loophole into the sunshine law- without realizing it, because, well, we the public elect judges- without really knowing how smart they are or aren’t. Most voters have never read a legal decision or brief to evaluate judicial competence. They just go with who they know, who someone endorses, or who has the right name.

The loophole they’ve created is that a public body tasked with public business, can now, create a committee to discuss their work, and do it in private, if they call it an “information session” – something that doesn’t exist in written Ohio Statute except in the discussion of public solid waste facilities:

(e) Except as provided in division (A)(2)(f) of this section, prior to taking an action, other than a proposed or final denial, upon an application submitted under division (A)(2)(a) of this section for a permit to open a new or modify an existing solid waste facility, the director shall hold a public information session and a public hearing on the application within the county in which the new or modified solid waste facility is or is proposed to be located or within a contiguous county.

While I tried to explain the only logical meaning of what an information session could be in the context of the Ohio Sunshine Laws to the Court, it’s not really relevant to this case, because, well, “information sessions” aren’t in the law- or in the Yellow book either.

Members of a school board, or city commission can’t meet together in a number greater than a majority of their members according to ORC 121.22. So, any time you see Judy Dodge and Debbie Lieberman having lunch at Coco’s together, they are breaking the law. The Montgomery County Commission is made up of 3 members, 2 is a quorum, and they can’t meet and discuss any county business without being at a legally called public meeting.

So- how do public bodies usually get around things like this? Well in the case of the School Closing Task Force- the committee only had 3 members of the 7 member School Board on the task force- one more and it would have been forced to be called a DPS board meeting.

But, what happens when board members go to a presentation given by the Secretary of State about how to comply with the Sunshine Laws that’s given for all the 1000 odd politicians we elect in Montgomery County? They are attending an “information session” – where the main flow of information is from the SOS to the elected officials, and the elected officials aren’t discussing public business that is directly affecting their entity. That’s an “Information Session.”

What happened in Valerie Elementary, or on the bus in the 4 following stops they made outside other schools and HQ, was a closed meeting of the task force, a body that the trial court called a public body. The court of appeals said it was my duty to prove deliberations took place, even though the law clearly says even the threat of closing a public meeting is a violation. The court further states that my failure to do depositions of the task force is a reason for dismissal. To clarify this for the judges, they think that asking people to self incriminate themselves is somehow going to provide proof of deliberations- when the violations of the law were actually the act of not letting me in, not letting me record, and not properly notifying me of the meeting.

Even the newspaper fought me getting an affidavit from their reporter who was allowed on the bus, but wasn’t allowed to record.

The burden of proving what goes on behind closed doors is NOT part of the law. 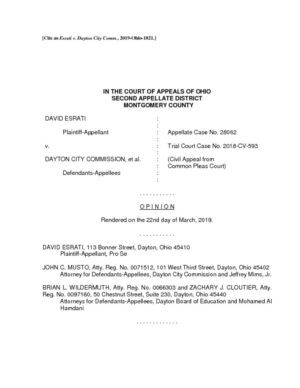 However, they did acknowledge a key pieces of my evidence, which clearly proved the School District was doing everything they could to break the law and not get caught (which is breaking the law, btw):

{¶ 30} As a final matter, we note that Ex. 3 includes a discussion between Dr. Lolli and the DPS Director of Media and Public Relations in which the Media Director stated that sending information to every task member by phone (“i.e., conference calls”) would ensure that “there won’t be any public records of that, either.” To the extent this implies that the Open Meetings Act could be circumvented by this avenue, we note that the Supreme Court of Ohio made the following comments in White v. King, 147 Ohio St.3d 74, 2016-Ohio-2770, 60 N.E.3d 1234:

Nothing in the plain language of R.C. 121.22(B)(2) expressly mandates that a “meeting” occur face to face. To the contrary, it provides that any prearranged discussion can qualify as a meeting. Accordingly, R.C. 121.22 prohibits any private prearranged discussion of public business by a majority of the members of a public body regardless of whether the discussion occurs face to face, telephonically, by video conference, or electronically by e-mail, text, tweet, or other form of communication.

* * *
* * * Allowing public bodies to avoid the requirements of the Open Meetings Act by discussing public business via serial electronic communications subverts the purpose of the act. (Emphasis sic.) Id. at ¶ 15 and 18.

Maybe if the judges had been paying attention to the recent case in Cincinnati where the City Council just got fined 6 figures for violating the Sunshine laws:

Hamilton County Common Pleas Court Judge Robert Ruehlman March 7 signed off on a settlement in which the City of Cincinnati will pay $101,000 to conservative activist Mark Miller and his attorney over text messages sent among five members of Cincinnati City Council in violation of Ohio’s open meetings laws….

In a series of intense statements from the bench, Ruehlman, a Republican, invoked the memory of good-governance crusader Murray Seasongood and said the Democratic council members should resign from their offices and pay the money back.

“First of all, you essentially lied to the people of this city,” Ruehlman said, saying the council members conducted secret meetings via text message. “The real business of the city was handled through these emails and texts.”…

Miller says he brought the lawsuit because the five had been texting among themselves about city business.

“They purposely and intentionally violated the open meetings act with what they did on their own, out of public view,” Miller said after the hearing. “They need to conduct the public’s business in public. It took a judge and a lot of legal horsepower to bring them around to what they should have been doing all along.”

Source: Everything You Should Know About the Cincinnati City Council Text Lawsuit

My next stop will be the Ohio Supreme Court. What good are “sunshine laws” if the only way to enforce them is to hire a lawyer at great expense to weave through all these nuances of crappy case law and poorly written legislation. That big fine btw-

The city will pay $1,000 to Miller for the violation around the group texts, $10,000 because council member Wendell Young deleted some of his texts and $90,000 in legal fees to the Finney Law Firm for work that attorney Brian Shrive did on Miller’s behalf in the case.

In addition, the city spent more than $70,000 on outside representation — partly on independent counsel to mitigate conflicts of interest when activists launched another public records lawsuit regarding texts sent by Vice Mayor Christopher Smitherman, and partly to pay outside tech consultants who retrieved the texts from council members’ phones. According to officials, city attorneys spent more than 400 hours on the case.

That’s why this Ohio law has no teeth, the only people who profit from it are the lawyers, and then, the perpetrators, when caught, are never removed from office. It’s not up to the courts according to ORC 121.22- it’s up to the prosecutor or the Attorney General, and they don’t do anything in these cases.

Then there is no hope for Montgomery County……

They will stop at nothing now.

Time to move out while you still can.