Justice comes late to the president of Penn State, as he and other are sentenced to very short jail time for their role in the Jerry Sandusky sex offenses:

Three former Pennsylvania State University administrators, including former president Graham Spanier, were each sentenced to serve at least two months in jail Friday for failing to alert law enforcement about a 2001 incident involving retired football coach Jerry Sandusky and a boy in a campus shower. The sentences marked one of the final rulings from the criminal justice system on the shocking saga of missed opportunities to stop a sexual predator associated with one of America’s most storied college football programs.

They are guilty for what they didn’t do. They knew, but failed to act.

Dr. David Hopkins and his staff at Wright State aren’t facing any charges, in fact, most of them still are getting paid.  What did they do? Well, that depends on who you ask. Finger pointing, lawsuits, breech of contracts, odd hiring, even odder logo redo,  real estate purchases, failed presidential debates, H1-B visas, issues with nepotism (a trustee’s son was hired without a job posting) the list goes on and on- yet, the man who was paid to be captain at the time the ship was sinking still has a job.

The very foundation of the institution was critically damaged. Life long employees are now without jobs, key positions are opening up like pot shops in Colorado, and staff is interviewing everywhere and anywhere to escape the mess that Hopkins made.

The oddest thing about all of this to this observer is that the Board of Trustees is also intact, despite being the designated check and balance to this shit show. What’s even more insane, is that being a trustee in the state of Ohio to a public institution is an unpaid gig.

The trustees shall receive no compensation for their services, but may be paid for their reasonably necessary expenses while engaged in the discharge of their official duties.

Then again, there is the saying, you get what you pay for.

The latest news on this front is Bruce Langos, formerly of Terradata and currently working for Sheriff “Shifty” Plummer, is now the newest Wright State Trustee. Langos previously starred on this site for being a tax evading beneficiary of the Austin Landing tax scheme where only little people pay taxes. 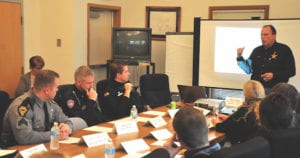 That Langos, who says he has an undergrad and MBA from the unaccredited “Hamilton University” is the best pick for the seat on a board over an institution of higher ed, has me scratching my head. Considering half the hub-bub at WSU stemmed from questionable relationships with people closely linked to the Dayton Development Coalition of which Langos used to be the chair, says Kasich is looking to manage a coverup instead of bringing in a true objective voice.

There have to be more qualified, less controversial people who are actual Wright State graduates to place on the Board.

Wright State is a critical part of our local economy, and the damage done to it under Hopkins and the existing board cannot be left to ride off quietly into the sunset. No matter how nice Hopkins is, or how apologetic the board, they are all guilty of malfeasance in office and at the least, should be removed from any positions to do with the University.

This is a travesty. Worse still, is that after gladly pocketing his outlandish salary, Hopkins checked out ahead of schedule, leaving his water boy to keep it tidy til the chosen President arrives. As you say, Hopkins is culpable for this disaster and should be held accountable, legally! Look at the impact on good and loyal people that is the by-product of his pitiful performance. At the very least, Hopkins should return his ill gotten gains of salary.

You hit the nail on the head. There are other concerns involving Hopkin’s Reign of Error. FWIW a number of Hopkin’s Deans & Faculty were installed as such without going through proper Ohio State hiring &/or faculty promotional guidelines. This aspect needs to be investigated. Some of these people are holding state-funded positions they are not qualified to have. They, as we have learned true for others at WSU, are another source of dollars being drained from the Good People of Ohio and to the detriment of the students. In keeping w/the Sandusky theme, one scandal a number of WSU are aware of shows how disgusting and corrupt Hopkins is. He had been made aware of an incident of near Sandusky proportions that was deliberately swept under the rug. The incident involved, as was revealed in part during a recent trial, a Hopkin’s Dean that full well knew of a faculty member taking compromising photos of patients without their prior knowledge or permission. The only action the Dean and Hopkins did was to cover it up. Police were not notified. No true investigation. Think about what happened to Penn State administrators and compare to how a similarly disgusting scandal was handled. By those at WSU. These among other truths are snowballing and when they hit, as all truths do, the State of Ohio is going to be out millions and millions of dollars. Thanks to Hopkins and your cronies for making everyone think all is well in a Disneyworld fantasy while you all walk off with your version of black ops dollars.

Estrati is just so jealous because no one ask him to do anything.