I just got back from the candidates event hosted by Neighborhoods over Politics at Sinclair. Called, “Rock da Vote” it comes complete with a wisecracking MC and a DJ. Unfortunately- it didn’t come with a ton of voters, but since it was livestreamed on FB- maybe it will reach more folks than most of these events.

I’ll have video posted soon. Each candidate was given 3 minutes to answer “why they are the best candidate” and “what are their top three issues and how they will solve them.”

If you are thinking of voting for Chris Shaw or Matt Joseph, you really need to watch their responses and realize that they, despite their time in office, have no grasp of what they can or can’t do- and so they lie about it.

City Commissioners don’t create any high paying jobs- except for their friends through the patronage system. They can’t solve the gun problem. Need proof- ask Juvenile Court Judge Anthony Capizzi who tried to enact gun ordinances- and got death threats as well as an instant smack down by the state.

When it comes to running a small business, Chris Shaw needs a dose of what he calls his success. How about the taxpayers fund his competition- and give a half-a-million dollar building to his competition in the dry cleaning industry- for just $10. That’s not creating jobs- or even “economic development” it’s charity to rich developers.

Matt Joseph talks about increasing the minimum wage- which is good and fine, but, again, not something that he’s going to accomplish – or succeed in passing. And he doesn’t even say it as if he plans to do it. If you look back at what he’s done since he waltzed into office in 2004, virtually unopposed- since the Board of (S)Elections has managed every time to keep folks opposing him off the ballot, he’s barely able to name a single accomplishment- except taking credit for “Welcome Dayton” which was championed by former Mayor Gary Leitzell.

Let’s talk about the real problems in “economic development” in Dayton under Shaw and Joseph that haven’t been addressed.

Low property values: Houses that can be bought for under $40K almost must be bought for cash, as banks don’t want to mess with them. This means it’s really hard to turn neighborhoods around- esp. when the leading “home improvement” strategy in West Dayton is fire by arson and demolition. When we add in the insane arbitrary property tax that rises as you improve your neighborhood- all it does is force gentrification and robs poor people of their life’s investment. Without providing a method for financing, insuring and protecting investments not only from thieves, arsonists, but what your neighbors do, it makes investing in impoverished neighborhoods almost impossible.

That’s why I’ve said that we need to totally revisit how property taxes are assessed in areas that are listed as CRA, HUBzone, Opportunity Zone and qualify as a food desert, vacant, and depressed, if we want to see investment. We’ve tried building entirely new plats- Madden Hills, and frankly, they haven’t held their value. We’ve tried to jump start a historic neighborhood- Wright Dunbar, and values have seemed to max out at less than what they sold for right after rehab. The only money invested in the West Side under Matt Joseph has been in demolition. And, as I’ve said- “you can’t build a city by tearing it down.”

Of course, the retort is, you can’t change how we assess property taxes, that’s a state law, to which I say watch me. Just because the situation is so dire, and the banks, insurance companies and appraisers no longer care about these areas may be the very reason why a smart leader can start working on solving the problem through creativity instead of misdirecting tax dollars.

One of the things I loved at the beginning of the event is that they read the list of those who have died of gun violence in Dayton this year. All of them. Not just the 9 in the Oregon District Massacre. It brings me to the other truth Matt Joseph can’t address- Dayton’s Police force has been decimated under his “leadership” while the rich folks have built their own private armies of cops. This has to stop. If it looks like a cop, is armed like a cop, drives a car like a cop- it is a cop- and they work for either the Sheriff or the DPD- not our private organizations that think they can control the city by buying people like Whaley and Joseph and Shaw.

After the shooting of Samuel DuBose in Cincinnati on a traffic stop by a University of Cincinnati cop- we should have had a come-to-Jesus reckoning about these private police forces who can legally kill people, without any public oversight. People in West Dayton should have police response times equal to that of the businesses in the Oregon District. We had a shooting last night at Dollar General (again) and yet, why isn’t there a strong police showing at the corner of Third and James H.? Seriously. There used to be a police station right there for a reason folks. Matt Joseph let it get shut down. 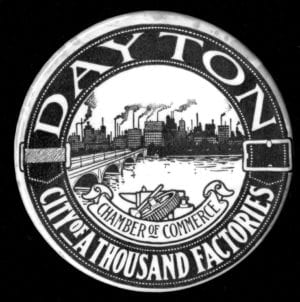 When you hear people say “we had to cut resources” and “the economic downturn” caused us to make cuts- and then you realize that Columbus, Cincinnati, Cleveland have all been doing better, at some point, maybe it’s the fact that we’ve elected charlatans with no original thoughts of their own for years. It’s why we have 30+ jurisdictions in Montgomery County alone- filled with elected officials who rule over the ruins of a city that once boasted as being the city of 1000 factories. There is a reason there has been a mass exodus from Dayton- and it’s not just busing or bad schools. High taxes, insane red tape, pay-to-play, and lack of vision have helped build things like Wright State and the Fairfield Commons Mall outside of Montgomery County, as well as later- The Greene. It’s why we’ve seen the rise of Austin Landing and the Benchwood district of Butler Township- where taxes are illegally collected by non-cities – sometimes only on the poor working class. 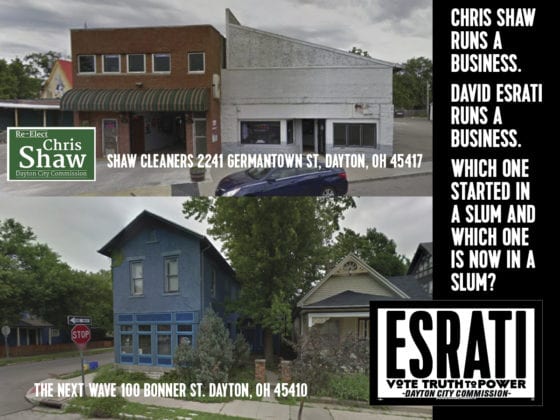 Shaw and Joseph claim to be union supporters- at the same time as they are trying to give a sweetheart deal to GM under the table, while their union “supporters” are striking about the same inequity Joseph is rambling on about. Shaw talks about his business chops- yet, it’s his by virtue of birth- and right now- doesn’t even have a sign on the building. His “business” is surrounded by boarded up shops. My business was a boarded up shop- and has managed to win a preservation award as my neighborhood has blossomed. You have to actually go take a look at both and decide.

Joseph hasn’t updated his website in years. Shaw barely has one.
Try to comment on theirs, ask questions, get a response, or find an idea.
Do you really need these two back in office?

If you realize that voting for Shenise Turner-Sloss and David Esrati, when combined with the vote of Darryl Fairchild, Nan Whaley and Jeff Mims no longer can control the Dayton City Commission without swinging a vote from these strong independent voices.

Matt Joseph could have made Welcome Dayton happen before I ever got elected if he would have listened to the Ahiska Turk residents in Old North Dayton. The entire commission was blind to them and Rhine refused to meet with them, so they told me. Nan certainly praised him for his leadership with the program but he had nothing to do with it until it was a success. I didn’t see him at any of the functions between June 2010 when it started and October 2011 when it was announced to the world. In fact there is nothing that I can recall that he has ever initiated that benefited the citizens. He certainly contributed zilch between 2010 and 2014. His only attribute is that he works at the base, so there is a connection. Chris Shaw was on my Leadership Council that Nan tried to get shut down. He initiated zilch on that council, as did most of the others. He came to the city manager and myself with Derrick Foward as representatives of the NAACP complaining about minority businesses not getting City contracts. We explained that the businesses need to be registered with the City in order to be notified about the RFPs and that the NAACP needs to actively get businesses registered. They did nothing at that time and probably still complain about the issue. Every member of that commission lacks the two things needed to make Dayton thrive. They are 1) Vision and 2) Creativity. They also lack the charisma needed to inspire others to do great things.