Investing and the market should be about good faith in a company- after all, isn’t that what all the debt rating agencies are supposed to help us with in making decisions? Just yesterday, Standard & Poors warned it may downgrade GM’s credit rating- which helped kill off 31% of the stocks value. 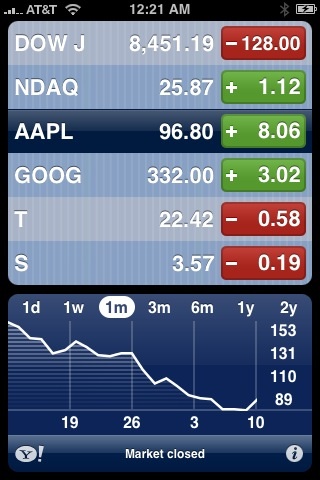 That’s a serious punch that may serve as a knockout blow, especially since all “investing fundamentals” went out the door years ago. When we look at Apple computer over the last month- and see it swing from 153 to 89 there seems to be zero connection between Apples financial health right now (great products, great services, mounds of cash on hand) and its value.

Which shows that the market shouldn’t be allowed to be a part of a businesses financial evaluation- but just a Vegas sideshow casino operation.

We need reality to be part of the financial sector again, and the first step is to eliminate Credit Default Swaps and all options, shorts and longs, and get back to straight investing- with a minimum one year commitment. Read this explanation of CDS and what the government is thinking of doing to regulate this counter-productive financial practice:

[Credit default swaps] are basically insurance that companies buy from one another without any regulation whatsoever. Perhaps not surprsingly, given the turn of events the past month, the Fed wants to impose some order on the credit default market. Which is why there’s a big tomorrow to try to hammer out the rules.

Nancy Marshall Genzer: Credit default swaps are like bets. I want insurance in case a company fails — so I buy a swap. I’m betting it will fail. The person on the other end of the deal thinks the company will be just fine. If it is, they keep my money. If not, they’re supposed to pay up. Decision Economics senior economist Pierre Ellis says, it’s kind of like betting on a game with a buddy.

Pierre Ellis: You want to be sure that, should that person lose, they have the resources to pay off the bet, and that’s what a clearinghouse does.

The clearinghouse would be a referee. Ellis says it would standardize swap contracts and make sure the parties have enough cash to pay up. And the rules would still apply if the swaps were traded. Say, the company I bet against looks like it will go under — and I’ll win. If I need cash right away, I can sell my swap to someone else. Right now, the swap trading is unregulated. So everybody’s gotten tangled up. It’s like a big, sticky spiders web. Wayne State University law professor Peter Henning says Lehman Brothers was caught up in the web — then it failed.

Peter Henning: Of course, when one part of the web became unhinged, it affected everything else.

Milken Institute economist Jim Barth says a clearinghouse would bring all the swap traders under one roof. They could see the entire web, and minimize the damage.

So “Credit Default Swaps are like bets” should be your first clue that these aren’t reasoned investment, but wanton all-out gambling. Shorting stock is also betting against a company which can actually drive a companys stock value down. All these market manipulations are counter-productive to the idea of having a stock market to supply capital to corporations and to share risk and reward over a greater number of people. After Enron, new requirements were put in place that made “going public” a little more difficult, forcing a new level of scrutiny to be applied to a companys inner workings, however, because of our lassiz-faire “regulation” we also allowed these newely engineered products like CDSs to become part of a system that had already lost touch with the reasons for the equity markets- to help grow our economy.

If we want to see a return to “business” – we need to go back to fundamental accounting and simple finance. All this complex derivitive market has done, is increase complexity to skirt rational regulation and allow carpetbaggers to create schemes to divert good money into greedy hands, with a “scrape” going into the bonus pockets of “high-finance” types.

If you aren’t prepared to buy stock in a company for at least a year, and willing to lose it all, you shouldn’t be in the market. If you can’t read simple financials to evaluate a company’s value- they shouldn’t be allowed to trade on the market. If we don’t get back to fundamentals, we won’t have any markets at all.

You’ve proposed many times over the past several weeks that investors be required to hold equity investments for a minimum of one year. Isn’t this already in place in the form of the increased federal capital gains tax incurred on equities held less than a year. It seems that your proposal would only serve to discourage investment in the market and decrease substantially liquidity in the markets – exactly what we don’t need right now.

The problem isn’t liquidity- it’s credit, and fear from the volatility. Both of these are solved by forcing investors to hold onto stock. The increase in capital gains tax isn’t steep enough to stop program trading, or other stock manipulations. The penalty needs to almost guarantee a loss on every transaction.
This will prevent charlatan CEOs from being left off the hook for screwing up- since investors won’t just dump and run, but actually have to ride out the bumps.