The “brilliant people” who think that this is rocket science- really don’t get it. This is the preamble and a few excerpts from the beginning of a  panel discussion in the DDn today.

Editor’s note: Teens acting out, pushing the envelope, is nothing new. Yet, when large groups come together to cause trouble at citywide events, as has occurred several times in downtown Dayton in the last year, it affects not just the youth and their families, but the city as a whole. Our partners at Dayton.com asked what can be done to build a more cohesive relationship with our city’s future citizens, ensuring a safe environment for all. The conversation Dayton.com staffers Vivienne Machi and Kamron Taylor had with four community activists touched upon issues relevant not just in Dayton, but in any community….

Brian LaDuca: If the problem is student/teen behavior as it relates (to) downtown, then I see the problem simply being a lack of well lit, invigorating communal spaces. Skate parks, music shells, dynamic store front designs (not necessarily actual stores).

Marlon Shackelford: The 5 percent of teens who are miseducated and misguided are guiding and educating the 95 percent that are bored, have idle time, are angry, and who are looking for something to do. There’s a lack of mentors and “womentors,” and a lack of efficient programs for teens.

Jonetta White: …We can no longer have this “hands-off” approach to being a community. Adults should feel responsible for ensuring the well being of their children and for the children of the community. It takes a community to raise a child, and adults cannot be afraid to step up in the lives of young people who may not have any other positive, adult influences.

Catherine Crosby: It impacts the attractiveness of the City overall. It impacts our ability to recruit companies and families to move into the City because it creates a perception that the City is unsafe.

Source: What can be done to help guide urban youth? | www.mydaytondailynews.com

I’m sorry- I’ve been to every park in this city. Every school yard. For the last three years, I’ve hung about 500 green basketball nets. I’ve cleared basketball courts of weeds and debris. This year, I am also running a social soccer program in my neighborhood. Today, we couldn’t play. You know why? 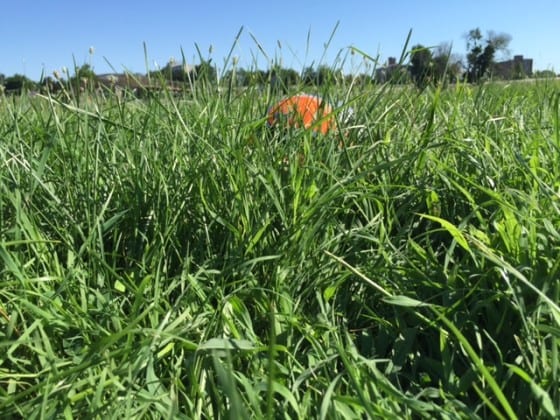 The grass at Burns Jackson park was taller than a full size soccer ball this morning. The field had also been run over by several cars- since the cable fence is broken. This isn’t rocket science. When I moved to this neighborhood we had 2 basketball courts- now we’re waiting on them to refinish 1. We had playable tennis courts. People used to play softball all the time in the park- now you can’t see a mound, baselines and weeds are higher than the benches.

The city is about to spend a half a million on the old Society Bank/Third National building- despite it’s appraisal at $350K- and 2 other private bidders. They have no stated public use or public plan for the building. They have yet to do anything with any of the other 3 half-million dollar buildings they over paid for. They have money to buy other peoples property- but they can’t take care of their own.

Drive by Delco Park in Kettering anytime. All the soccer fields are well groomed, properly graded and have soccer goals. Look at the ball parks- full of people every night. Kids, adults. Dayton- nope. Can’t play soccer on a Sunday morning because Fred Stoval and company can’t cut the grass.

So, try as you might to do something with “urban youth”- good luck. After I started showing photos of the sorry condition of all of our basketball courts in my last run for City Commission- the city was guilted into spending a million bucks doing long overdue repair and replacement of courts across the city. Maybe by September they will finish the remaining basketball court in South Park- maybe not.

A city that can’t do basic maintenance has no business being in charge of anything. You want a community that people can be proud of? Learn to cut your grass.

If you enjoyed reading true breaking news, instead of broken news from the major media in Dayton, make sure you subscribe to this site for an email every time I post. If you wish to support this blog and independent journalism in Dayton, consider donating. All of the effort that goes into writing posts and creating videos comes directly out of my pocket, so any amount helps! Please also subscribe to the Youtube channel for notifications of every video we launch – including the livestreams.
Subscribe
11 Comments
Inline Feedbacks
View all comments

What needs done can only be accomplished one way – legitimate hands on parenting, period. I’m sick and tired of this “it takes a village BS.” It takes a mother and a father – at least one very seriously committed mother since so many “urban fathers” are hit run scoundrels. I won’t even call them men because they’re not. A man doesn’t abandon his child in conquest for his next piece of ass and I’m sick of paying for it as a society.

Doesn’t sound sympathetic enough? Kiss my ass. This is an epidemic and the cure isn’t throwing more of my hard earned dollars at it via taxation dear liberals.

It isn’t basketball hoops being installed by a politician with empty pockets but if it makes you legitimately feel good – be my guest.

It certainly doesn’t help seeing the city’s continual development blunders of which they have no clue but that isn’t the answer either because that’s just more money down the tube either way – IT’S PARENTING not funding bastardization as we’ve come see the norm and support with welfare dollars.

Mentoring? Yes, from a mom and dad – not the street, or some jive ass preacher after another drive by shooting trying to pocket a little “admin money” to administer another social program.

Ralph- if a parent wanted to play soccer with their kid- good luck. Or basketball- until they fixed many of the courts.
Look at Delco Park. Look at any Dayton park. Any questions?

David, for the time being, could we organize a village mowing party some evening this week? I’m available both Wednesday and Thursday evening. (And could even possibly spend an hour at it after 5 tomorrow) If we can get even ten neighbors with lawn mowers to meet up I think we can now out at least enough to get your game on this Sunday. What do you think? I only have a reel mower, but it’s a pretty decent one and I’m willing to sweat and toil with it even if I can only get a small patch of it done myself. If someone who had a power mower but is not physically able to use it themselves, I can do even more. You should not have to abandon a good program that currently costs the city nothing just because the city can’t be responsible for their own grass on public property.

I offer this by no means as a permanent solution, but as a on off effort to make it work for this weekend.

What do you think? Can we go to our neighborhood Facebook page or Nextdoor and see if a few people are willing? Time bank maybe? Weather is supposed to be good tomorrow and Wednesday. Thursday looks a little dicier for such an endeavor.

Ralph please run for office. You are right on the money.

I have been to several parks in Dayton over the years. Most are awful. People just shit on them, literally.

That attitude, unfortunately a big part of the problem here. You know, you keep a place liking like a shit hole… well there you have it. So the solution is: rather than be proactive and do something to improve the crappy condition of parks that no right minded parent would want their kids to play in, you’d prefer that everyone be reactive and refuse to fix problems like this so that the only elements remaining are the destructive, the drug dealers and those that shit on things.

Frankly, I think it’s a disgusting attitude. It’s similar to saying, “This is why we can’t have nice things” while refusing to help kids learn better behavior as they grow up, by teaching them to respect nice things so they can have them.

Fix it Kido ! I am all for people taking charge.

I don’t have time – that is why I moved out of dayton. Buildings are great, a lot of great people too. But the schools are a joke, and there are enough people to ruin for those who actually pay taxes that it was time to leave. I was sick of living with people who don’t care. I care enough to pay my taxes and take care of my place. Too many losers ruined it for me.

I do what I can daily to fix it. I am invested in my neighborhood. I know my neighbors. I introduce myself to new people when they move in. I help people when I can.

Oh and I have three jobs so I’m TAXPAYER. I love people to assume that because someone must struggle to make ends meet that they don’t pay taxes, or that if their income is lie enough that they don’t that they are worthless. Thank you.

And I’m obviously not very good at typing on my phone without it making weird substitutions. I wish I could say I catch them all. Lol.

No tax base equals unkept parks, among other things. Esrati will point out that dayton spends their tax dollars unwisely, and perhaps he is right. But rather than fight city hall, I moved. I moved to a place where people work, pay taxes, and parks are nice.

Ralph was on the money. Bad parents equals bad kids. And if you go to these parks people treat them like shit. 3 years ago at the park I witnesses a family – adult male and female with three kids – eat food at a picnic table. Somehow they could not manage to grow away their trash in the waste bin that was 9 feet away. Typical dayton folk. Tattoos and smokes are on their mind – trash is someone else’s problem. I took care of it for them that day then promptly put a for sale sign in my yard. Too many losers and lazy people who refuse to grow up and be a part of society. It’s just hand outs after hand outs.

I prefer to stay and fight for my community. That includes calling people out stuff like that. To their faces.

The City cut the grass yesterday!