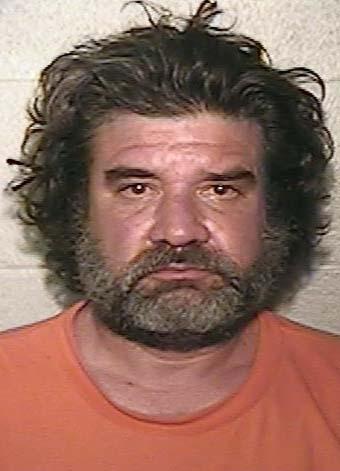 Last year, esrati.com broke the story about the firing of Tony Tipps from the Board of Elections. Now, Tipps, son of former Ohio Democratic Party Chairman Paul Tipps, and now a lobbyist, has been arrested for possession and trafficking in meth according to “Peak of Ohio” and the Bellfontaine Examiner.

Robert Allton, 24, and James Davis, 29, both of Columbus, and Anthony Tipps (pictured right), 52, of Dayton, were each charged with felony counts of possession of drugs and drug trafficking in methamphetamine.

Tipps is one of the subjects being investigated by the Montgomery County Sheriff for sending out the letter that accuses the directors of screwing up the provisional ballots in the 2006 election. That the BOE might have done something wrong is not the focus of the investigation, and undoubtedly, Tipps’ arrest will make it even easier for them to pass the buck.

Considering that the BOE also has hired an employee’s family member convicted of rape, and now this, someone would think that it’s time to clean house at the BOE and start fresh. These aren’t the kind of people we want running our elections- are they?

Tipps had his job at the BOE for at least ten years, thanks to his father’s powerful connections in the Democratic party. His father is called a close confidant of Senator John Glenn and he sits on the board of John Glenn School of Public Policy. Is this the only qualification needed to get a job at the BOE- connections?

Obviously, when left to fend for himself without daddy’s help- we get a different skill set.

It will be interesting to see if the three accused dealers get similar sentences, or if Tipps Sr. manages to use his connections to once again help his kid out.

If you enjoyed this post, make sure you subscribe to my RSS feed! If you wish to support this blog and independent journalism in Dayton, consider donating. All of the effort that goes into writing posts and creating videos comes directly out of my pocket, so any amount helps!
Subscribe
22 Comments
Inline Feedbacks
View all comments

So easy, a caveman could do it.

That looks just like me when I wake up in the morning!

They hired a rapist, have current employees with criminal records, admitted they screwed up provisional ballots, and now we know they had a drug dealer working there as well.  The current Montgomery County BOE may go down as the most embarrassing BOE in the history of the State of Ohio.

THIS IS STILL AMERICA YOU A-HOLE GUTTER JOURNALIST.

@ur madre- thanks for the comment Tony. I never said you were guilty- I said accused. However, I’m really curious how anyone who isn’t involved in something illegal can end up with “Meth” accidentally.

Hehe, could that really be “Tony” ? I presume you can speculate based on ‘where’ he visited from. Don’t tell me he came from a co.montgomery.oh.us domain !!

Didn’t yet another Democrat Patronage Baby get busted drinking and driving and fleeing the scene a few years ago http://esrati.com/credibility-of-leadership-city-of-dayton-style/3109/  and claimed that a friend named ‘Tony’ was really driving?

Well, we found the Tony.

David, while I rarely (never) agree with your political positions, I applaud you for going after Democrats just as you go after Republicans when the public is being taken for a ride.

I can promise you that the truth will get him at least 5-10 years!  You dont get charged with trafficking drugs by being in the wrong place at the wrong time! From the Ohio Investigative website, looks like the prosecutors already did him a favor by dropping several charges already, Good luck getting past Manufacturing meth, trafficking, and possession

@bob- can you supply a link to that website?

I am confused.  Why did the Board of Elections fire Tony Tipps?  After reading the charges filed against him it sounds like someone the directors there would hire not fire.  Is there a mug shot of Director Harsman relating to when he was on put on probation (Case 1999TRD06709) in October of 2000?  How many criminals has the Deputy Director there hired?  It sounds more and more like the Board of Elections is an organized crime operation instead of just a completely corrupt government office.

David, well were not talking about the quality of their website.  Now Ive been a city worker for 20 years and I know a lot of police officers.  I dont think state police officers go around and waste their time charging people with four felonies that are innocent of breaking any law.  Now a speeding ticket is a little different.  I am sure Mr. Tipps has earned those charges.  Meth is a horrible drug! What possesses people to even want to touch that stuff! Isnt it like 85% addictive?

I think thats about right nasty drug.  Once your addicted good luck getting off.  I was explained that he could be charged with the other charges still when he goes to grand jury? is this correct does any one know.  If so that is a lot of charges.  Bet he isnt sleeping very good.

What do you get if you cross a hairdresser with a werewolf? A monster with an all-over perm.

I just deleted 3 comments from the same IP- by someone using three different pen names.

Please note, you are welcome to comment anonymously – but you have to use the same nom de guerre on this site. Dem’s the rules here.

@DE – What was the pseudonym poster trying to convey?

@Pedro- the three posts were all attacking me, or insinuating that I was unfairly going after Mr. Tipps. Generally, as long as they are clean- I allow people to attack me- but not other commentators on the site. I do ask that people stick to the same name- so that they don’t multiple post to make their opinions seem backed by more people. I also will delete comments where I know the e-mail that is put in is intentionally false- like someone attacking a county commissioner- and then putting that commissioners e-mail as the sender etc. This is not the Dayton Daily News site- comments are all read- and assessed, by me.

I am really surprised that people who you brand with a scarlet letter here are not allowed to mess up with the option of grace.  Everyone has a moment they regret.  You should never judge anyone by the opinion of others…and don’t bring up the past of a person who is trying to change their future.  Everyone you meet is fighting their own battle.  People are allowed to sometimes be weak or make mistakes.  And, people are allowed to be different.  It doesn’t make them ‘weird’ or ‘wrong’.   In fact, I have learned that some of the nicest people have a few vices here and there…and some of the most judgemental people go to church every week.  So keep your mind open and always stay kind.  If we all do one random act of kindness daily, we might set the world in the right direction.

Tom- facts are facts. Tony and I are facebook friends- and get along fine.

The story wasn’t so much about Tony- as the factor of “friends and family” being the secret handshake to government jobs in Dayton Ohio- not competence.

Facts are facts?  What is that? I did not say anything about truths or untruths — I was speaking to your blog design, reiterating others misfortunes. It is preying on people and further seems to give you a sense of confidence to place a feather in your own cap.. seems pretty gross to me to use people like that and their misfortunes. But, yet what do I know — we live in a world where being mean is cool these days.. being a bully and so forth… just look at the last election.  But in this case, especially when they are trying to better themselves, this page keeps making its way into the public domain. That incident was nearly 6 years ago and you keep it up like a trophy. Maybe if you could put kind things out there and do something nice for someone you might stand a chance to get elected one of these days.  Just sayin,’ facts are facts…

The way the web and google works- there is never a way to make things disappear. That’s a good thing- or we’d have revisionist history.

You can keep your rose colored glasses-

The Montgomery County Board of Elections is still a cesspool collection point for political friends and family. Removing this won’t help.