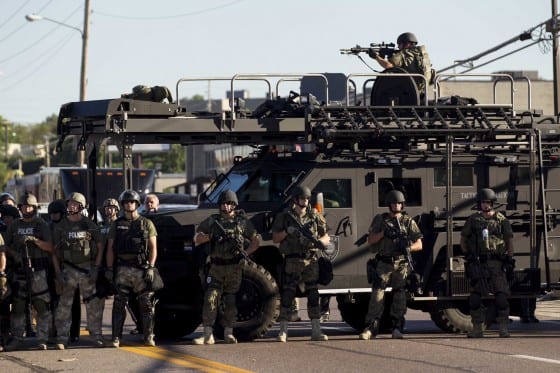 We are no longer the home of the brave and land of the free.

When gun nuts talk about needing to own an assault rifle, because they are afraid of the government overstepping its bounds, they now have the poster photo to prove the crazies are right.

Let me count the ways that this is wrong. The idiot on the top of the “Urban Assault Vehicle” is actively sighting a target. If he had a legitimate reason to do this, all those “riot police” should be on the deck- with their weapons pointed at an imminent threat. If anyone else held a fully automatic assault rifle like that, they would be shot by the police with the excuse that they were inciting panic. In Beavercreek Ohio, you can get killed for talking on a cell phone with a BB gun in a Walmart- this is an order of magnitude worse.

The mismatched uniforms- with desert boots and woodland camouflage also make these “police officers” look more like extras on a low-budget Hollywood war movie. Why wear BDU’s at all? Are they police- or soldiers? Police officers work for us- have pride in their community, and represent us- soldiers are here to repress us. The moment you don a military uniform, you are no longer serving and protecting me, at least that’s the way this former soldier sees it.

No matter how much police forces train to use this gear, it’s not suited for police work. Good cops know their first and most effective tool, is talking to people, trying to establish rapport and common ground. Note to cops: the moment you don your GI Joe gear you throw all that “one of us rapport” out the window. If we really need an MRAP on the scene, you’d do better to let it be the National Guard in it, because after the shit storm is over, they go home outside the community- and you, well, you’ve permanently distanced yourself by actively taking arms against our citizenry.

SWAT was a bad TV show- that forever changed the idea of what cops should and shouldn’t do. It probably did as much or more damage to the idea of “community based policing” than Jack Bauer on 24 did to interrogation techniques. No, physical torture doesn’t get you good intel or accurate intel- it just makes you guilty of war crimes. Want a lesson in the Geneva Convention- ask Senator John McCain, don’t ask “John McClane”- the cop character in the Die Hard movies which also distorted the reality of what happens when most people shoot other people- even highly trained people shooting other people. The reality is, most cops don’t shoot very often, and this kind of BS isn’t why they got into policing. Any chief who orders his officers to go out with automatic weapons and point them as if to shoot- should be relieved of command.

For those who need a refresher- the United States is probably the only country that glorifies a war battle in its national anthem, and not even the revolutionary war, but the war of 1812. We seem to still be confused as to what a “land of the free and the home of the brave” means. Are we now brave, to walk in protest, facing our fellow countrymen armed to the teeth, to protect our freedoms which have been slipping away from us since September 11, 2001?

The Constitution, starts with this preamble. Read it. Then look at the photo above. Do the two go together?

We the People of the United States, in Order to form a more perfect Union, establish Justice, insure domestic tranquility, provide for the common defence, promote the general Welfare, and secure the blessings of liberty to ourselves and our posterity, do ordain and establish this Constitution for the United States of America.

Habeas Corpus- the right not to be be unlawfully detained, and to have a judge and jury determine your fate:

The Privilege of the Writ of Habeas Corpus shall not be suspended, unless when in Cases of Rebellion or Invasion the public Safety may require it.

When police show up with the firepower to go to war, our collective rights are being stripped from us. Those which are guaranteed in the Bill of Rights (the first 10 amendments to the Constitution).

Look again at the photo above. The Third amendment specifically applies to this-

“the Third Amendment subordinates military authority to civilian control and safeguards against abuses that can be perpetrated by standing armies and professional soldiers.” via The legal dictionary/free dictionary.

Do those cops look like cops, or professional soldiers to you? They do to me.

We have a constitutional law expert as our president. Now is not the time for him to be on vacation. What is happening in Ferguson MO is a danger to the state of our union, and demands his attention. It’s time for a come-to-Jesus meeting about police militarization, because if this is how my police serve and protect, I say they are doing neither.

Right after I posted this- Butler Township Trustee Nick Brusky tweeted the following:

@esrati a big difference compared to how the Cincinnati Police dressed for the riot in 2001 pic.twitter.com/83rV6k3DSQ

Impressive that a suburb has this level of gear You’d expect this paramilitary SWAT thing from a big city police department (like St Louis), but not a suburb.