As I just got my 5th box of basketball nets from Tuffy Brooks (thanks to Chad Snoke and Geo Pro Consultants) and went out to do some net maintenance on our parks, I finally have a success story to tell. 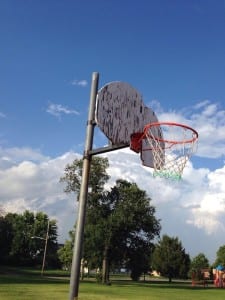 Last month I stopped by the “Arlington Hills” park – a double court on a field where the old “Gangster Courts” projects were, and I reported a crappy backboard and graffiti on the court with the “Dayton Delivers” mobile application. Here is the photo of the rotting backboard and lame rim:

There was graffiti on the court, someone has been driving donuts on the court, there are no benches for players. In all- a poor excuse for a park and a court.
I’ve never actually seen any kids on this court, in all my visits- and the nets don’t need replacing as often as other courts.

Today, I stopped by after hanging nets at Dunbar HS, DeSoto Bass, Wogamen Elementary School and fixing nets at a few other places as well as hanging a few on rollout rims for the kids playing street ball. 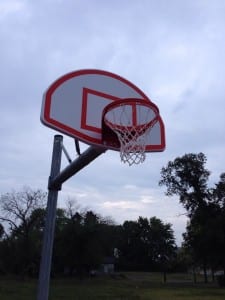 It looks like a place where you actually would want to play a game . It made my day. I’ve also witnessed the demolition of the courts at Burkham Park, Princeton Rec Center and have been told Residence park is being rebuilt right now.

They still aren’t using my “preferred rim” – the First Team FT172D which I think is the best rim out there, but, these are the second best style out there.

Ideally- every court would also have benches for guys to rest, while the game is going on, and a working drinking fountain, since most courts are in full sun.

I’ve heard that Mallory Park is up for repair as well, and a few others this year, with more next year, although no one has told me the complete list.

I only hope the three rims we put up at Princeton are going to be recycled and not thrown out.

This is the kind of city I envision- one where our parks are clean and safe. Our schools are great, our neighborhoods strong and our businesses successful. Even though I’ve never won an election (except as precinct captain or neighborhood president) I feel that my efforts to hang the green nets were the catalyst for the city to finally take action and fix our courts.

I’m still sad that we’ve closed our neighborhood pools and replaced them with spray parks, and that we have no youth sports programs to speak of, but, I hope to keep the focus on keeping our kids on the courts instead of in the courts through sports and recreational programming.

Thank you to all the barber shops and beauty salons, and all of you who donated- and extra thanks to those who bought me nets, rims, zip ties and ladders.

All that grassroots effort- has finally begun to pay off. Or, as some would say- shame is a powerful motivator.

David, I’m glad to see someone working with you on your “net” work. :-)