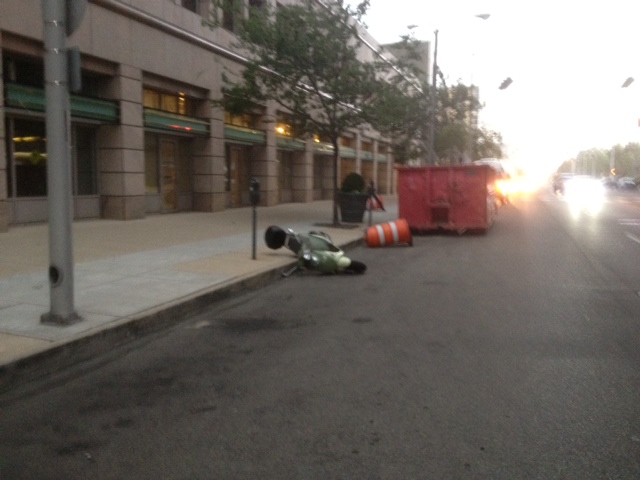 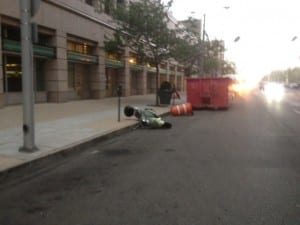 Last Thursday, July 26, 2012, was confirmation day: The United States is indeed a third world nation. My partner in life was supposed to fly back from LA to JFK to CVG (Cincinnati). Her flight out of LA was delayed, then when she got to JFK, her flight to Cincinnati was cancelled due to “weather” conditions.  Yes, weather forecasters were predicting the return of the “straight line winds” – or derecho, a weather condition I’d never heard of or experienced before- about 3 weeks previous on a Friday, when I was in Downtown Dayton and my scooter got knocked over not once, but three times (twice with me on it- but not moving yet).

It is now Saturday, and she’s still trying to get a flight back to Dayton/Cincinnati. The morning flight at 9:30 was cancelled as well. Traveling from LA to Dayton now takes… let’s see, she left LA at 7:30 a.m. PST on Thursday and is hoping to arrive Saturday at 4 p.m. (Eastern time). That’s 2.5 days.

On Thursday, Apple also released the next version of their operating system, Mac OS X 10.8 “Mountain Lion” and despite being at work, in a high tech business that depends on the Internet, the best speeds that are available to us without paying through the nose, were telling me that the download would take over 4 hours. Apple no longer sells the update on disk or even USB stick, it’s download or bust. The file is about 4 gb – which, it just so happens is around the amount the monthly limit is for cell phone data transfer- leaving those in rural areas limited options in getting access to the software. I finally had to pause the download at work and come home to finish it where it only took an hour and a half to finish the other 2 gb. Please note, that Estonia, Finland and South Korea all have much higher bandwidth available.

We also tried to join in on a webinar on Thursday. This is not a high bandwidth operation, just PowerPoint slides and voice. Our Internet was disrupted over 6 times, while we were experiencing lightning.

Last night, I replaced a thermostat in the house that had somehow lost its programming in Wednesday’s lightning storm. Despite lightning being a pretty common occurrence (unlike Derecho winds) it still manages to knock out essential services and play havoc with infrastructure. This is 2012 people, we put a man on the moon in 1969- and we’re still not capable of building weather proof infrastructure? Smart communities put electrical wires, phone wires and even cable tv in the ground for good reason.

What worries me more is that extreme weather seems to becoming more the norm and we’re becoming more dependent on electricity and the Internet. That new thermostat? It even has an Internet connection (if you aren’t familiar with the Nest programmable thermostat, watch the video and buy one now– it’s an amazing piece of energy-saving technology).

With global warming or climate change- or whatever it is that’s happening (I still believe that we’ve got our heads in the sand about pollution caused by our reliance on fossil fuels) we’re only beginning to see weather becoming a major challenge to life as we know it. As far as I know, a tornado has never hit downtown Dayton- but has hit Xenia more than a few times in my lifetime- now we have Derecho winds? What’s next.

The fact that it takes 2.5 days to fly from LA to Dayton- is like we’ve been put in a time machine. That’s what it took in the twenties. By car, the 2790 miles would take 44 hours, that’s a half day less, and of course by car, she wouldn’t have been routed to JFK to get to DAY. As a comparison, except for earthquakes disrupting high speed trains, a 300 mph train would have made the journey in 9.3 hours – with internet access all the way, a first class style seat, the ability to dine in luxury and move a lot more people for a lot less energy (I can’t find a definitive study, but this is interesting reading on Wikipedia: Fuel Efficiency in Transportation).

The pattern of investment in our country on infrastructure and the way we let private companies own public utilities isn’t preparing us for the future. Building more highways for cars while ignoring high speed rail, ignoring much of our country’s availability of true high speed internet, and the hardening of our airports from terrorism while not hardening our powergrid from the elements shows a complete and utter failure of leadership and vision for our “Superpower Nation.”

And despite Coloradan’s recent rush to buy guns for self-protection due to the actions of one crazy guy with red hair and an arsenal, the wild fires and drought are a much bigger threat to our country. Food stability is essential to democracy- to quote Mark Twain, “Principles have no real force except when one is well-fed” and we’re looking forward to much higher food prices thanks to our current droughts effects on agriculture.

In a society that’s become more interconnected via systems and technology, our political stability is dependent on these systems working and being dependable. What typically defines third world countries is instability in everything from political leadership to running water and sanitation systems. I still remember the wind storm a few years back where my house was without power for 9 days. What kind of third world nation is the United States becoming?