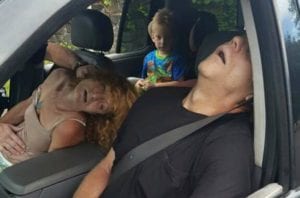 In this Wednesday, Sept. 7, 2016 photo released by the East Liverpool Police Department, a young child sits in a vehicle behind his mother and a man, both of whom are unconscious from a drug overdose, in East Liverpool, Ohio. Drug overdoses killed a record 3,050 people in Ohio last year. AP Photo.

A small business I work with has had the Dayton Fire Department stop by almost every other day- because someone OD’d in their parking lot. The other day it was a city employee. The medics revealed that when they looked him up- they found out that he had been treated the day before as well. If a Narcan® revival was a frequent flyer bonus, we’d have people with miles to go to the moon and back.

Current practice is to revive them, offer treatment, which they refuse and let them go right back to using.

That would classify it as insanity- doing the same thing over and over and expecting a different result.
I wrote a post about Narcan, coincidentally, 2 years ago to the day: “Just say no to naloxone” I was chastised in comments. And in the two years, we’ve just seen massive increases in overdose deaths- turning Dayton into the Heroin epidemic epicenter of the nation.
Two friends of mine, who are former journalists (the real kind- no longer employed by the Dayton Daily news) went out on an assignment from a foreign publication to do a story about the heroin problem. Within 30 minutes, they’d taken a photo of a roadside sign offering treatment- and followed a DPD ambulance to an OD victim in a parking lot of the U-haul franchise. Photos, story- the works- easy peasy.
In my last piece I spelled out the societal costs of heroin and overdoses- and they still apply. The drain on resources puts your life in danger- while the paramedics are out dealing with a self-inflicted wound- you might have to wait for a ride while you are having a stroke or heart attack.
Save and release ain’t working.
It’s time to change the way we do things. The first time you qualify for a trip back from death, you are taken to clinic where you are held for four hours, where you have to watch a video explaining the new practices and procedures on Narcan- and given a chance to enroll in a treatment program, offering methadone, Suboxone, Naltrexone, Vivitrol etc.
You are also informed that the next time you need to be revived, you will spend 24 hours in the center. There will be round the clock counseling available, but, you won’t be receiving any medications that aren’t prescribed as part of a doctor supervised program.
Third visit, you’ll spend 3 days in the center. Fourth visit, a full week. Fifth visit, a month. At the end of the month, you will have an option to voluntarily stay in a highly supervised treatment program for up to a year, or walk.
Unfortunately, after the fifth visit, you will no longer be revived by safety personnel. If you are unidentifiable as a five time loser, and are being treated for the sixth time, you will face a mandatory 1 year mental health incarceration. This isn’t in a prison, but a secure treatment facility. There are no options for appeal, or release. If you are identifiable by the medics, treatment will not be administered.
Drivers licenses or state ID’s will be “punched” with each treatment- as reminders and for medical personnel to check.
Right now, we are kidding ourselves if we think we can arrest suppliers and take enough drugs off the street to solve the problem. All the posturing of law enforcement is an insult to our intelligence. Heroin addiction isn’t a criminal problem- it’s a mental health one. Yet it does cause massive increases in crime and threats to public safety.
What we can do is seize all assets of anyone caught with what we would identify as quantities to distribute- and use the proceeds to fund the treatment programs.
Of course, the other option is to stop kidding ourselves, and just start providing addicts with safe, inexpensive heroin and take the profit motive out- and give people who want to stay high permission- no judgements. This has been done in other countries and has cut crime and deaths considerably. There are people who are able to function in society while high- this is nothing new- my paternal grandfather was a PhD MD and a morphine addict his entire adult life.
If you have any better ideas, feel free to leave them in comments.
It’s time to stop the insanity cycle of save and release in Dayton Ohio- it’s not working.

Well, the graduated treatment idea sounds good, but first, of course, comes funding issues. Then come incarceration issues that are not likely to withstand constitutional scrutiny. The biggie is funding, though.

The final “real” paragraph is the best idea, but I think you know that. Every law enforcement officer will scream about it, though. After all, how many of them would lose their jobs?

Really? Who pays? Where is the facility or facilities? Just the shear number of OD’s are overwhelming. And our community does not support mental health. Why would they support your plan? Talk to Helen at ADAMHS.

I like that you are throwing some real ideas out there David. Im sick of hearing people say “just let them die. thats what they want anyways”. But it is an incredible strain on our system. If your last idea had a chance, just legalize and provide it in the cleanest form possible with clean needles, then I would say thats the best way to go. Give people the option of treatment but otherwise if they want to waste away then let them do it legally and without the strain on the system. Make heroin, narcan, and needles a taxable item for them and let them be.

Jenet- We’re paying now. Each ambulance run, the coroner, the crimes committed to get the money to buy heroin, the time in jail, the expense of chasing the sellers- prosecuting them.
Face it- the real crime of heroin is what it does to the person using it.
Since when has the government been good at stopping people from doing stupid things?
The money generated from the taxes on recreational pot could easily support the treatment costs- but- then, again- we’d have to be willing to go there.
As to where is the facility? There are plenty of vacant buildings- even entire vacant neighborhoods in Dayton. There are also jobs created for counselors – many of whom could be recovered addicts.
We need new solutions.

I have been preaching heroin assisted treatment for years. After all, it works in many European countries and has for decades. Crime drops, overdose deaths plummet, people’s lives are stabilized and they know they won’t get dope sick. But as my old friend Winston Churchill states “You can trust Americans to do the right thing. After they have tried everything else.”

…yessir, dear David, the Old Bandito was witness to a recent sidewalk resurrection and it was an enlightening. The afflicted was being assisted by a off duty Miami Valley RN while numerous 911 calls were dialed. And the Dayton cops and EMTs arrived mucho pronto, and after a quickie analysis delivered the life saving elixir. The Lazarus like revival was amazing. And the revived, after being assisted to his feet, showed his gratitude by cursing and then taking a swing at his benefactors. “Don’t hurt him” the RN pleaded as the cops subdued him. “Yeah, ” I responded, “hand me your tazer and let me fill his ungrateful as with 50,000 volts”…