I’m sorry, this isn’t going to seem right on election day. People will say “Esrati went negative”- and that’s not the point of this at all. I just want to report the news as I see it, so all know what’s going on.

I waited way later than I normally vote to head to the polls. At 11:30 I was voter 38 in Precinct 1-D. That’s a light turnout folks.

Lined up on Burns Ave, at Warren Street, in the tree lawn were signs for Lutz, Williams, Mims, Whaley and Wagner.  I didn’t do my stencils or put out signs at the polling place because I believe that the people going to vote made up their mind before they got to the polls- and they’d see my name on the ballot when they get inside, where it counts. 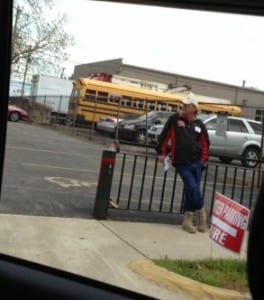 Handing out AJ Literature outside the poll today

At the parking lot- and barely 100 ft from the polls, was a guy handing out lit for “AJ Wanger, the leader for Dayton’s future” I took one. Right on the front is a photo of “AJ Wagner with former Dayton Mayor Rhine McLin”- the person who lost 4 years ago to Gary Leitzell, despite spending 6x what Gary spent. Never mind, she’s also on the Board of Elections, and if the vote is close, she’ll have to recuse herself from any decisions, which could hurt AJ.

I’ve scanned it and am posting it here for you to see.

If you get something else anywhere else in town- please let me know. 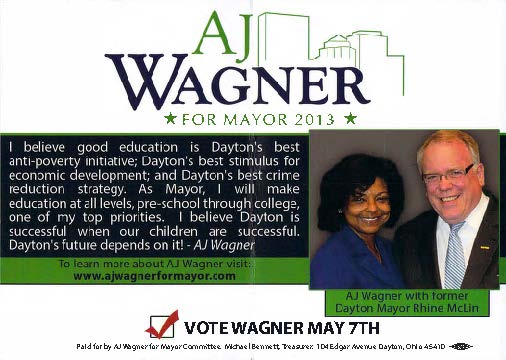 What AJ is handing out at Dayton Polling places today. Click on image to download full pdf- both sides

Does linking your self to the past make it seem like you are the leader for Dayton’s future?

Voted today for Leitzel. Voted today for Lutz. Had to go for the Indy trifecta and Voted Esrati In spite of some very real issue differences. I just remain concerned that the ninja thing has hamstrung you. Do admire the tenacity and not part of the dem, demo machine who’s lethargy and back room deals have done such destruction to our city. good luck!

Amazing….been away from Dayton for over 15 years and I STILL know everyone running for Mayor….

I received the same card that you did David.  However, I took extreme pleasure in throwing it away inside the polling place.  Although with todays results, Wagner is the lesser of two evils in the November election for me.  Dayton will never know what the possibilities could have been if Mayor Leitzell had gotten the opportunity for a second term.  I hate it when the city shoots itself in the foot.  I think by this point they should be running out of feet.

Dayton sucks, and for some reason unbeknownst to me, Dayton’s voters seem to like it that way.

I got the same card, but I got a different impression from it. Wagner’s picture with McLin seemed like he was screaming, “Hey Party Faithful, you can trust me, I’m a safe choice!”  With the way the machine works around here, it was probably the smartest campaign message he could have sent.

And no surprise, as I checked the voting numbers, because it seems like it was only the Party Faithful who went out to vote yesterday.  As per your numbers in the next post, adding up the number of votes each mayoral candidate got and then dividing by 2 (because we could all vote for two), about 5,000 people voted yesterday.

(Actually, my back-of-the-envelope numbers are wrong, as Joey Williams has 6,384 votes, but I don’t know how to work around the fact that people didn’t *have* to use both of their mayoral candidate votes, nor to use all 4 of their council member votes. So let’s round up to 7,000 and assume Joey Williams is really popular).

Note that this is in a city of roughly 140,000 people, so if only 7,000 people voted, only 5% of the populace spoke yesterday (yeah, yeah, some are under 18 and so don’t EVER get a voice, but you know what I mean).  And since Nan Whaley only had half of the mayoral votes…

(Full disclosure:  Although I voted yesterday, I don’t know if any of my friends voted, and I’m pretty sure none of them did.  I am part of the problem.)

Oh!  I also meant to say, upon seeing AJ Wagner’s card, it made me sink to new depths of cynicism as it inspired a question in me:

When politicians say that they are focused on improving education, do most of them mean:   1) I want to invest in people so that our area improves and incomes go up and improve the tax base and make life better for everyone, or 2) I want to manipulate your emotions with a basic “Think about the children!” argument to get your vote, but I really don’t think twice about education itself.

“Think about the children.”  Ye gods is that an overused political tactic…

@Zak, thanks for voting. To get the total votes- you have to add Nan plus AJ plus Gary which equals just under 10,000.

The best indication of number of voters was the presidential- which came in at around 60,000. Even though our population is 140,000 only about 108,000 of those are over 18. Some aren’t US Citizens- or residents of Ohio thanks to military.

If anyone can tell me about concrete ways these two will “help the children” – I’m all ears.

I’m voting for AJ in the fall.

Maybe AJ can help you out and feature you on his next post card? Couldn’t hurt. :-)

@Diane, AJ won’t align himself with anyone- but will push that he’s a good democrat, and he’ll raise a lot of money.

Dave – Been away from the website for quite some time, so I haven’t kept up too well…  I do have to ask the question, though:   Did it actually, physically hurt for you to type the words “I’m voting for AJ in the fall?”  Again, it has been a while since I have been on the site, so I will start scrolling through the old posts to catch myself up…  BTW, it is good to be back!

Oh, and I should have ended the above with the disclaimer that the comment was quite tongue-in-cheek!  (but it IS good to be back…)

@Another public servant: Given a choice between AJ and Nan as a member of the commission- there is no hesitation there. AJ has learned some humility in his life- he’s had to make difficult decisions on his own, and he’s been involved in Dayton leadership longer than Nan has been in Dayton. He’s a decent man.

What the big money in the Dayton “primary” meant

[…] oddest thing was that AJ’s ads trotted out Rhine McLin as a supporter. Considering he only beat Gary by a few hundred votes, it will be interesting to see if he continues […]