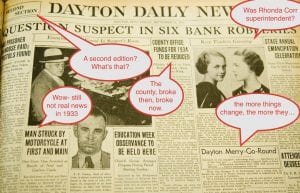 Front page of the Dayton Daily News on September 22, 1933 during the John Dillinger arrest- and still a bad newspaper

I stopped getting home delivery of the Dayton Daily News years ago because the paper couldn’t be on my doorstep at 6am everyday. I’m a morning person, and the ritual of getting up, reading the paper and moving on is important.

The iPad edition sucks. It gives a visual representation of a printed paper, and you can tap on an article and get it in a readable, scroll-able format. You can increase type size, and you can share (although limited). There is zero interaction with the paper or other readers through this edition. The app crashes, takes forever to load, has quirks like posting a grey box over the info on what stations and times an NFL game is, and if you switch apps- you are again waiting for the slow load.

It’s digital newspaper only the way a non-digital person would think of delivering it- still. In 2017.

But, now since the Cox sisters shut down the Franklin Print Technology center- the print edition has a deadline of 2pm, 3pm, 4pm, 5pm- depending on who you ask. It doesn’t matter. A “morning daily” that has a deadline much before 11pm is not a morning daily. Today’s paper didn’t have the Trotwood HS state championship score- or recap- just an article about the upcoming game. For the record- Trotwood beat Dresden Tri-Valley 27-19.

And they wonder why no one subscribes?

Of course, because they don’t understand digital in the least, they’ve done stupid things galore.

The most annoying is having all their “reporters” have Facebook presence and try to create clickbait stories, do polls, and “engage” with Facebook audiences. I can’t tell you how many stories I’ve seen them “find” on Facebook- and make it into the paper days later. Trolling facebook for news has to be the most pathetic thing ever done by a true journalist.

Unfortunately, in order for Democracy to work the way our founding fathers envisioned it a vibrant, thriving fourth estate is mandatory. Without the checking of their actions, we’re doomed to the kind of insanity that’s been going on in DPS, Dayton City Hall, the state house and the jail.

As the Dayton Day-old news continues to focus on shootings, car accidents, and running stories off the wire, there is less reason for an educated population to read it. They can all get the Washington Post, Wall Street Journal or New York Times delivered on the same device for about the same money and get real reporting with real news- albeit, not local.

It’s said that the advent of CraigsList- free classifieds, that sucked revenue out of the newspaper was the first major blow, but it’s a lot more complicated than just a loss of easy ad revenue. Newspapers didn’t understand how to communicate in a web 2.0 world to save their ink wells. The saying “Never argue with anyone who buys ink by the barrel” was so ingrained in their old school heads that they thought the only “discussion” was limited to “Letters to the editor” and an occasional guest column on the “Op-Ed Page”- that’s short for Opposite Editorial Page- which is funny, because the Dayton Day-old news did away with the Editorial page (local) long ago. No longer are “impartial” observers of the community trusted to define the local issues of the day in their world- we’ll try to “curate” the best and brightest of national writers, with an occasional local group spew guided conversation of people we deem as friends of our family (or whatever.) In the meantime- the rest of the world has thrived on legitimate discussion and conversation. Ever seen Reddit? 4Chan? Or Facebook? It’s full of conversations, by amateurs, on current events and interest. Where’s the 2 way channel on the Dayton Daily? It’s on Facebook- a property they don’t own, that they don’t get real revenue from, and where they aren’t in control. What kind of business model is that? A doomed on.

Cox has recently sold off good papers in other markets where they don’t have joint media properties- like a newspaper plus TV plus radio. This kind of operation used to be illegal- but Cox was grandfathered in in Dayton and Atlanta. Yet, here, the “integrated newsroom” is just as badly run as a single newsroom because their answer to the digital Armageddon has been to create more bad sites instead of on focusing on one good one- and then building a community.

No one other than them sees local news any differently on a digital screen from WHIO TV, WHIO Radio, Dayton Daily- etc. You don’t need 10 bad sites- you need one good one.

You don’t deliver news via “channels” you deliver it to people on screens of all kinds. And frankly, instead of printing your paper in Indy- you’d have saved money by giving the few remaining print subscribers a tablet with cellular connectivity and delivered the paper with a constant news stream that can be customized to their preferences- but, nooooo, you don’t get it.

You didn’t build a community, you destroyed it. You didn’t build a database of customers to deliver targeted ads, you let someone else do it, you didn’t invest in the best possible content producers with a deep understanding of local issues- you hired kids out of school and asked for click bait. You didn’t integrate production in a way that works – you kept following the same old “if it bleeds it leads” news style which isn’t really that interesting unless it’s at least 5 people bleeding (mass shootings have raised the bar on sensitivity).

I’ve offered before to help the Cox sisters put their inheritance back on the track to greatness in the era that they haven’t yet figured out, and I’m still willing to help them out- even though they still have enough money to actually benefit from the new tax plan (guaranteeing that if they just sold all this off- they’d still be rich beyond need and not be bothered with the rigors of pretend journalism). But, it’ll never happen.

You see, fake news is actually real news now, and day old fake news works just as well- just click here to see what Barbara Cox was doing when she got caught on film just before she died….

Call it skip day news, it is snappier.

So very true, all of this. The electronic edition is wonky, the website is utterly unusable, and it’s unfortunate about the stupid clickbait hoops that journalists I thoroughly respect are forced to go through, simply to retain a job. I got more info from your site about the DPS debacle than annywhere, and I appreciate you bringing “Dr.” (AP Style says no way if you’re not a medical doctor) Baguirov’s horseshit to light. Thanks, David.