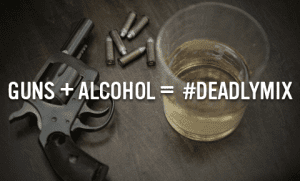 There are plenty of instances with drunk people shooting someone. Yet, most people who smoke pot say it mellows them out.

Of course, we can’t talk about illegal pot use- we’re talking about a prescribed medication for a medical condition.

People who register with the state of Ohio to legally use medical marijuana will be prohibited from possessing firearms under federal law, according to guidance released by the U.S. Bureau of Alcohol, Tobacco and Firearms.

In an open letter to federally licensed firearms dealers, the ATF advised in 2011 that marijuana is still a Schedule I controlled substance under federal law so any use of the drug is unlawful, and gun dealers are prohibited from providing guns or ammo to anyone they have cause to believe uses pot.

“There are no exceptions in federal law for marijuana purportedly used for medicinal purposes, even if such is sanctioned by state law,” the memo says.

Schedule 1 drugs aren’t really drugs- as in medicine- they are “Banned substances”- “Substances in this schedule have no currently accepted medical use in the United States, a lack of accepted safety for use under medical supervision, and a high potential for abuse.”

To get to the drugs- you need to go to “Schedule 2” which is defined as “Substances in this schedule have a high potential for abuse which may lead to severe psychological or physical dependence” and include such winners as:

Other Schedule II substances include: amobarbital, glutethimide, and pentobarbital.

Oh, no- we don’t have any problem with any of those Schedule 2 drugs. They wouldn’t possibly be dangerous to mix with guns.

But in a world where a game show host is president, “conservatives/Republicans” just voted to raise the national debt by 1.5 Trillion dollars, and the president and the party are endorsing a child molester- logic no longer takes precedent.

And while any blood alcohol content while carrying is cause to revoke your CCW- having an misdemenor OVI isn’t.

It’s time for logic to apply to our laws.