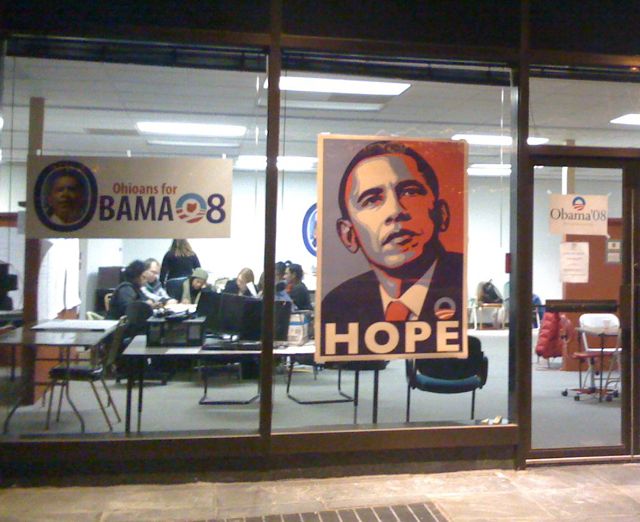 Yesterday I printed out a big “Hope” poster and took it down to HQ. A lot of people like it- including Spike Lee.
I was so worried about campaign rules- I put on it that I donated the printing- but- neglected to tell people who designed it- which I feel really bad about.
So here is everything you need to know- if you are interested- it was done by a graphic designer in California- Shepard Fariey – who was responsible for the “Andre the Giant” “Obey” posters. It was done because Shepard believes in Obama- and was donating the proceeds of his limited edition screen prints to Obama.
However- the poster took off- faster and bigger than Shepard could print them- they ended up on E-bay-and it’s got a bit out of hand.
Some people really don’t like it- thinking it reminds them of the Soviet posters from the 30’s- but any true student of graphic design knows the style was also used by the WPA here at the same time-
Either way, the point is – it stirs emotion- much like Senator Obama does.
I’ve told the campaign- to either give it back when they move out- or auction it off for either charity or the Senator’s campaign.
Here are some links to articles about it:
New York Times design guru Stephen Heller: http://campaignstops.blogs.nytimes.com/2008/02/15/beyond-red-white-and-blue/
Cool Hunting: http://www.coolhunting.com/archives/2008/01/shepard_fairey.php
Creativity Magazine: http://creativity-online.com/?action=news:article&newsId=124743
if you want to create your own small version: http://pentdego.com/obama.aspx

I’ve written Shepard twice asking him to put the image out there for all to print and distribute- to help the campaign- and haven’t received an answer. I don’t own the rights, and don’t feel I should be making copies- except for the campaign until I hear back from Shepard.

[update- 27 Oct] This poster has become iconic- and has inspired so many spoofs- a collection of them can be found here: http://www.posterpage.ch/exhib/ex216oba/ex216oba.htm

If you want a free sticker post election- see this site: http://pol.moveon.org/shepstickers/?id=-4333499-YCDnU_x

They will be offering a new Shepard Fairey Obama “yes we did-victory” poster starting Saturday November 8, at 12:30 p.m. ET.

Actually more WPA. Reminds me of those old Ben Shan posters or those REC posters.

Hi Jeff- got any links to share on the Ben Shan or REC posters?

The Electrification posters are classic modern- really clean, I’m familiar with both- but hadn’t seen them in a while.
The second Shahn poster is a gem- but I don’t see the connection to what Shepard is doing. But- thanks for the links.
I’ll get ambitious one day and find the posters it most reminds me of- and I’ll share.

We have black and white pdf one that can be printed in large format.

You can make your own Obama icon here:http://obamiconme.pastemagazine.com/

So now, Shepard is being sued by the AP for the image he used.
One marketing guy thinks it’s a PR trick:
http://edwardboches.squarespace.com/home/2009/2/6/shepard-fairey-sued-by-associated-press-brilliant-idea.html
an article that talks about the copyright issue in depth: http://www.timesonline.co.uk/tol/news/world/us_and_americas/article5671077.ece