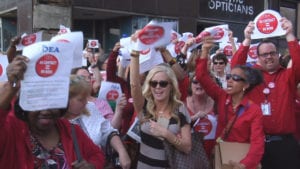 After being mostly absent in the discussions over the 400 odd issues up for contention in the contract negotiations between Dayton Public Schools and the Dayton Education Association representing the teachers, Rhonda roared into the negotiating room last Tuesday, excused the boards lawyers and they haven’t been let back in the room.

Of the 400 issues- about half are just grammatical.

The remaining 200 are serious. This is an ambitious attempt by a rookie to remake the district, and so far, the DEA has been unimpressed, leading to the invitation of a mediator.

The legal bills generated to the boards outside law firm have been large up to this point.

The DEA has already authorized a strike, and has promised to wait until after summer session to actually walk off the job, leaving time for last minute heroics, but, the question is will their members wait?

Teachers are now back in short supply, and other districts offer better pay, better benefits and much higher morale as enticements. DPS has been losing teachers at an insanely high 20% rate for the last few years, helping to contribute to the fact that this is the worst performing district in the state.

On Wednesday, I went to the community town hall at Belmont High School. Corr made every PR mistake possible in the span of an hour, leaving parents, teachers, coaches, bus drivers and concerned citizens feeling like they’d just witnessed a concession of failure speech.

She had no real answers on busing changes, which was her lead item- via her surrogate Dr. Burton who gave a lame powerpoint presentation basically outlining that DPS can’t get your kids to school now, or next year. Questions from the audience were better thought out than the new three bell time schedule, or on why DPS is training other districts bus drivers for free.  “We did train 60 drivers but only 7 of them stayed” (8:41 on the video).

Other questions about why Mark Baker was given a 2 year contract, despite not meeting the standard other coaches must meet- namely, not being sanctioned by the Ohio High School Athletic Association, got blown off- with “I can’t talk about personnel issues.”

Parents got hit last year with the major shakeup of the reintroduction of middle schools at the last minute.

Now, there is no confirmation that your kid will be able to be transported to the school they go to this year- next year. Parents, rightfully asked, “when will we know” which went unanswered.

Principals have reported teachers pulling up to the buildings with U-hauls to remove their personal items, something they’ve never seen at this level before.

It’s time to remove the board who hired this rookie, and to then remove her as well.

Dayton can’t afford to lose even more students to charters, to other districts, to vouchers, because our superintendent can’t lead.