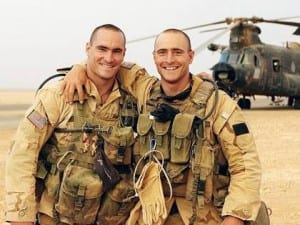 One thing about Netflix is that random discovery isn’t quite random. It’s for this reason, I sort of hope neighborhood video stores don’t go away. I also hope we always have libraries- and printed books- because, one day, once all the batteries wear out- there needs to be some proof that all this existed.

Friday night we stopped by Family Video- and when going back to look for another title- with big name action stars, I saw a movie I’d missed the first time- “The Tillman Story.” They had one copy. I looked it up on Flixster and saw it had a 91% rating- and took it home.

When Pat Tillman first left the NFL to “join the Rangers” I remember thinking- joining is one thing, making it is another. I didn’t know Pat Tillman from Adam- but, I did admire the fact that he was walking away from $3.6 million a year- to do what I’d wanted to do on 9/11– go in the Army to kick ass and take names. However, at 38 I knew I was a few years past when they’d take me back.

Tillman turned down all attempts to interview him- and, he kept his dignity and did his job. Unfortunately, his life was cut short by the accidental nature of war- he was killed by friendly fire. I do not hold the shooters responsible for his death- I know war is not order- it’s chaos combined with a roulette wheel.

It’s what happened after Pat Tillman’s death that is the real lesson in how far our country is being failed by our current system of “leadership” and how we as apathetic bystanders are just as culpable for his death as Osama Bin Laden supposedly is to blame for 9/11.

“The Tillman Story” isn’t a glorification of a “true American hero”- it’s a documentary about the systematic hijacking of his death into a PR move for “God and Country.” You even get to see John McCain and Maria Shriver talking about God at his memorial- only to hear his baby brother tell them that Tillman didn’t believe in God- and sharing the F-bomb freely.

Tillman knew that the war in Iraq was a farce. He also knew he couldn’t speak about it until his three-year enlistment was up (even though he was offered an early out after his first combat tour in Iraq). His diary as well as his uniform were burned by the Army- a direct violation of procedure- so that we will never know exactly what Tillman had to say on the matter. But luckily, we have his little brother, who enlisted with him, who shared an essay just before the 2006 elections- the whole thing is well worth a read- but, near the end he says this:

Somehow the most reasonable, trusted and respected country in the world has become one of the most irrational, belligerent, feared, and distrusted countries in the world.

Somehow being politically informed, diligent, and skeptical has been replaced by apathy through active ignorance.

Somehow the same incompetent, narcissistic, virtueless, vacuous, malicious criminals are still in charge of this country.

Somehow this is tolerated.

Somehow nobody is accountable for this.

This is not a democracy, it’s a republic- and the people who have taken us into not just two wars, but now a third, in far away places- have ignored the war going on at home. One where those in power are doing everything in their power to remain in power- and keep the people who put them there- arguing about things like abortion and SB5 while they clean out the rest of our piggy banks- so they can yell Monopoly at the end and pronounce themselves the winners.

War is big business, this community depends on Wright Patterson Air Force Base as its last remaining large employer- yet, when we get down to all those jobs- and all that money, what are we really supporting- a government that can’t be trusted.

We’re fed a continuous line of crap from the government, the media and it’s strewn around the internet like manure on a mushroom patch- but every once in a while, the crap slaps back.

The Tillman family is rightfully proud of their sons- and we should be as well. Watch this movie, and you’ll understand what really makes our country great- people like them.

The question is- how do you and I stack up? And, are you willing to fight the machine and take our country back?

I have not watched the Tillman story but I will.  Also worth checking out is a documentary called Restrepo.  It shows the good, bad, and ugly in Afghanistan.  I and most people I know are ready to fight to take this country back.  The problem is we no longer have a way to fight back at the ballot box or by voting yes or no to an issue or levy, it is a fruitless endeavor.

Are we ready to make a stand up and deal with the criminals in our neighborhoods that the police and city commission won’t take care of?  If so, what exactly does that involve?

Are we ready to enforce the zoning codes that the city will not and put the boot down on our neighbors and tell them to fix it or drive them out?  If so, how are we going to do it?

How are we going to fix the broken streets, curbs, and sidewalks that the city no longer fixes?  We have a city full of people that are paid to do nothing right now should we come up with a plan to make them do it?

I think we all know what type of effort it will take.  We are going to need a tea party like effort on steroids to fix this dumping ground of a city.

One of the key points of this movie is that Tillman was an atheist.
This in a nation that just changed the Pledge to the Flag to include “under God.”

This in a nation that just changed the Pledge to the Flag to include “under God.” – Dad

Emphasis on the “just” was added by me.  “Under God” was added in 1954.  If memory serves me, it was signed into law on Flag Day of that year.  Maybe it’s because I’m such a young guy (!), but I usually don’t think of things that happened 57 years ago as “just” happening.

Interestingly Texas only just added God to its state pledge in 2007.  Is that recent enough for you, Bubba?  That surprised me when I saw it because with my prejudices about Texas I’d have thought they would have always included God in their pledge, but nope.

Bubba, I’m well aware Dad was talking about the national pledge and not the Texan one. I just thought you’d find the info about Texas interesting. Sorry to have bothered you with that information, information that points out that even Texans, a God-fearing folk if ever there were one, didn’t care about mixing religion into their pledge until very recently.

DL – Sorry about misunderstanding your intent!  And you didn’t “bother” me with the information.  I think that we’re alike in that we both like to learn new things, no matter how obscure and I do think that was some pretty obscure information! :) We’re both fonts of useless information! ;)

And, to show my goodwill, I even gave you a “thumbs-up” on your reply!!

The military reserves along with the natlional guard, which are effectively active duty, accepted recruits into their 40s throughout the previous decade. And how old were you in 2001?

There were always slots for hype peddlers in the Bush-era Pentagon. Too bad the Abu Gharib detanees weren’t subjected to your blog and that of your co-handler. The Hague Convention, however, prohibits torture. I can testify as to the lethality of your blog, having died the death of a thousand yuks.

@Donald Phillips, if you truly think reading Esrati is torture, then you must be a masochist because no one’s forcing you to visit Esrati.com; you do so voluntarily.