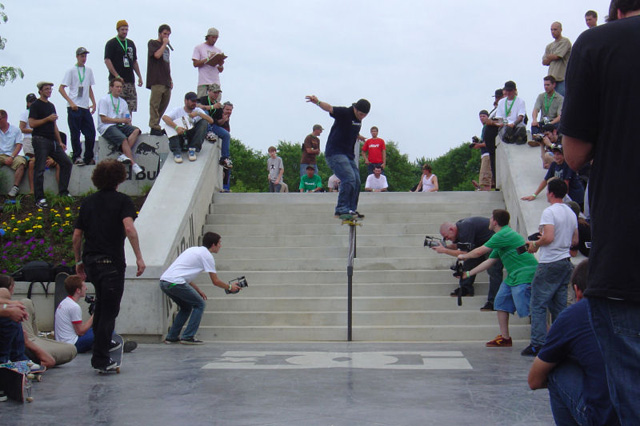 The Dayton Daily News has turned over a new leaf- and has gone on a waste-busting spree. First up wasn’t the clown corps  in charge of tax giveaways- the “economic development” people- which we have in abundance. Nope- it’s the people in charge of providing public amenities.

First was yesterday’s “news” that most municipalities lose money on public golf courses. Well, they also lose money on parks and playgrounds- as you could look at the “opportunity costs” involved vs. having housing or businesses on parkland- plus the cost of upkeep. However, golf isn’t the most practical of things to subsidize. The number of golfers in our population is relatively low because we’re not a retirement community- and golf is a game for those with plenty of time on their hands and usually some money, too. Also- it takes up an awful lot of space for relatively few players. Compare a soccer complex with a measly 10 full-size fields, 2 kids-sized, throw in some volleyball, a BMX track, a half dozen baseball diamonds- and even a pond, picnic shelters and parking, wait- did I just describe Delco Park- and you have less space, with higher use than 3 tees at a golf course.

Also, public golf courses compete directly with private golf courses- who have to pay taxes on all that land- not a fair equation.

You did notice one thing though- Dayton was one of the few communities to break even on golf, imagine that. 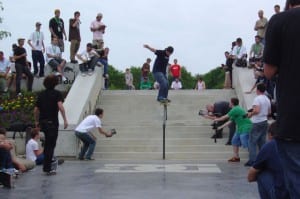 Next up in the DDN hit list is the new Kettering water park- and mention of the closed Splash Moraine. Kettering understands better than most communities that good parks and recs are good for building a good community. They also have good schools and have managed to have a modicum of diversity as opposed to our outer-ring communities. Besides the aforementioned Delco Park- they also have a world famous signature skateboard park, courtesy of native son Rob Drydek and DC Shoes, and an ice arena- the only public hockey-sized skating rink in Montgomery County (where you will find me playing Huff-n-Puff hockey each winter). We could also add that Kettering has an amazing complex at the High School- and James Trent Arena- open to residents, an arts program at Rosewood and the Fraze pavilion which hosts concerts- including free ones- all summer long.

Compare that to Dayton- which has no skate park, no dog park, no BMX track, no soccer facility, closed its arts center, handed over Island Park band shell to Metroparks, closed pools, and a useless sized ice rink under the stewardship of Metroparks at Riverscape.

Kettering gets quality of life as a measure of success and understands that healthy cities have healthy residents. Dayton on the other hand would rather engage in crony-capitalism and try to artificially prop up home values by subsidizing both for-profit and non-profit builders in adding new homes (See the Charles Simms homes or the ones being built by East End Community Services or the St. Mary’s Development refurbishment of Marvin Gardens) while we have an abundance of housing stock that we are simultaneously spending huge money to tear down- or “deconstruct.”

Read the title of the person in charge of the new Kettering water park in this DDN quote:

The “Kettering parks’ business services manager”- that they understand that parks and recs is a business- and a service to the community is how advanced Kettering gets it.

We do have a regional entity that gets quality of life as economic development- it’s called Five Rivers Metroparks- and if greater Dayton were smart- we’d move all parks and recs programs under its authority, provide Metropasses to Montgomery County residents based on the contributions of their communities’ current investment in recs programs and on average income of the community. Cities would pay into the program based on census numbers- with fixed contributions per person and we’d start seeing a true quality of life infrastructure system that is balanced and well run.

Kettering deserves kudos and study by every other community in the region for its mastery of this part of government. The rest of the region needs to start understanding that we will only begin to advance as a community once we start working together.

You did notice one thing though- Dayton was one of the few communities to break even on golf, imagine that. It should not be hard as the land acquisition costs were paid years ago and the operating costs can cover the upgrades that are necessary to maintain market share plus they have location, location, location.  The hysteria of building a golf course could not have been done in Kettering as there was simply not enough land and there were plenty of golf courses, so like Military Spending in Europe.  Why do it, if some other idiot will? Kettering is a perfect socialist paradise through some good planning and some luck….Luck being the failure of Dayton and the construction of 675 and its ancillary investment.   It has had affordable housing (small, easy to afford and maintain), no history of busing and no real racial issues.  It has had plenty of GM money that it did not have to share and it maintained high standards in the schools, at least academically.  (I would contend that the Sports Programs suffer from lack of expectation, which hurts talented under privileged children from attaining scholarships that other more interested programs achieve.)  The bandshell hmmm, well if the Fraze was not constructed to bring in exclusive acts and control access then the bandshell would have been more of a draw…..I used to go all the time, pre Fraze. I will admit that Kettering was shrewd in the placement of the services as the Pool, Delco Park and the Drydek land are on the higher density, “poor side” of town, so those with less opportunity for private pools or summer activities get to skate, swim and go to the parks.  Plus access to bleed over from Beavercreek and being located off of 675 is a blessing, especially if you compare access to the Splash Moraine, where ever that place was.  Look I do not want to take anything away from Kettering but a great deal of it is luck and being born at the right place and the right time. PS if they get the access to the… Read more »

Not to detract from the intended point, but isn’t calling Riverscape’s ice rink “useless sized” a little bit hyperbolic? I think the all of the people who enjoy it would strongly disagree.

@Dave- even icebandit will agree with me- Zamboni’s come in a single size for a reason- ice rinks are made for Hockey- and you can’t play on that pint sized pond. I’ll also say that when you have too many people on that small ice- you end up with dangerous conditions with ruts etc. It makes no sense to build half sized or three quarter sized rinks- ever. The only exception to building a different than regulation rink is if you are building a speed skating track- but, that’s a different kind of skate- so we won’t count it.

Overall, I agree with your generalization here.  Shocking, I know.

MetroParks and Kettering do a great job and the other communities can learn from them.    I agree with the comment that some of the success in Kettering is based on demographic luck, but some was also good management

…… but as usual, you go too far in your critique.

@Compare that to Dayton- which has no skate park, no dog park, no BMX track, no soccer facility, closed its arts center, handed over Island Park band shell to Metroparks, closed pools, and a useless sized ice rink under the stewardship of Metroparks at Riverscape.

The Humane Society has an outstanding Dog Park in West Dayton.    The County Dog Park is just over the border in Harrison Township (which needs to merge with Dayton anyway).   There is an indoor BMX facility in north Dayton.  And what punk needs a skate park when you have an interesting urban environment to explore?

I disagre completely about RiverScape.   It’s a nice size rink for families and casual skaters.    Hockey is still a third-tier sport in this area.   Maybe there’s demand for a full-size rink, but it doesn’t belong on the river.   The new park addition is just about perfect.

Dayton doesnt’ need to be in any of  that business.

I also believe that Dayton still has decent, if aging pools and now the cute splash parks – which is a national trend, not a Dayton thing.   Lots of classes too, according to their website.   Didn’t they just build a new rec center somewhere?

Can’t you give a compliment to Kettering without tearing down your own city at the same time?   Come on, Mr. E – lighten up.

Forgot to mention it, but I’m sure there’s soccer fields in Dayton somewhere, too.

David is so so so correct criticizing Dayton on its lack of foresight regarding the undersized ice rink at Riverscape.  A full size rink capable of hosting hockey would have been a huge huge benefit to the city and its citizens.  As it is, skating at Riverscape at night has a feel very similar to skating at Rockefeller Center in NYC:  it’s so nice it’s magical– and those of you who haven’t done it should.  The marginal cost (you dim decision makers) to make it hockey size would have yielded great returns to the city and its residents in terms of utility, vibrancy and activity downtown.  It’s not hyperbole to state that we could have had hundreds of people downtown playing-watching-enjoying hockey each night of the winter.  What a missed opportunity.  But still, it’s a great space and I hope everyone takes the opportunity to enjoy the rink as it is and enjoy a night skating under the stars.