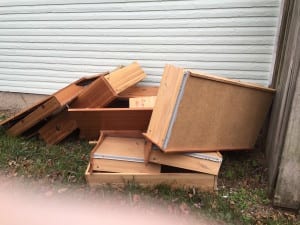 I turned this in to “Dayton Delivers” 2 trash collections ago- after it had sat for at least 1. Still there.

After the last election where stupid Dayton voters put the “Endorsed Democrats” on the ballot, we got hit with a fee for new street lights.

This year, we get higher trash fees:

Dayton proposes the largest waste collection fee increase in years, which comes at a time when the city lost a major service contract and personnel costs are rising.

The proposed fee hike exceeds the increases of the three previous years combined.

Dayton’s waste collection fees usually are tied to the consumer price index, which has been flat because of low fuel prices.

Also, Dayton next year will lose thousands of customers because Riverside is switching providers.

Dayton provides waste pick-up and disposal services to about 55,000 customers.

Because you read this site, you aren’t a stupid Dayton voter, so you’ll understand the following:

The fact is that while this issue will slide under every one’s radar until January when the first bills get mailed, everyone is up in arms because Queen Nan, media attention whore, is making statements about accepting Syrian Refugees- and trying to square up against Governor John Kasich, media whore, who is saying no Syrian Refugees will be coming to Ohio.

Note, your chance of being killed by a teen driving a car with temporary plates while texting are much higher than your chance of being a victim of a Jihadist. But, that’s the point- why discuss things we can fix here in Ohio- like School funding- or reinstating proper leaf collection, which actually make a difference?

If you enjoyed this post, make sure you subscribe to my RSS feed! If you wish to support this blog and independent journalism in Dayton, consider donating. All of the effort that goes into writing posts and creating videos comes directly out of my pocket, so any amount helps!
Subscribe
16 Comments
Inline Feedbacks
View all comments

Things like this is why, over the past four years, I went from naive optimism about Dayton to frustrated realist… and now I’ve concluded that I can do little about the actual political state of this city.

I was 0 for 6 on the last Election Day for the people and issues I did vote on.

I’ve recently done what I’ve grumbled about doing for over a year and I’ve signed a contract for a house on the outside of I-675. I won’t be looking back, except perhaps to turn on Channel 7 from time to time and point and laugh and wonder what truly idiotic scheme City Hall will manage to get itself into in the future.

Dayton City Hall is kind of like a diaper: it needs to be changed often, and for the same reason.

And so Dayton loses yet another well-educated, gainfully-employed taxpayer to the ‘burbs.

Good luck! You are going to love it and wonder why it took you so long to see the light.

Just thought I’d let you know how much I appreciate your blog. A sixth-generation Daytonnian by birth, I left at age thirty for the west coast and now live in the Front Range. It’s beautiful here, but I continue nursing a desire to return to my roots. That being said, the disaster Dayton has become keeps me from moving back. It’s truly painful to read your posts. I will note, however, that my annual garbage fee tops $225, so $150 sounds like a bargain. Of course, my garbage actually gets picked up, and my empty can is returned to the side of my house — yes, really! — so it’s worth the premium price.

There we have it folks; it is not like we warned you about what was and is happening to the rest of us that are still residing and living in Dayton. This blog is a stark reminder and beacon of truth, quite painful to the reality for all of us in Dayton and Montgomery county.

Although some of us outside of Dayton can see some glimmer of light remember the county still resides here and makes many decisions of municipalities outside Dayton.

Glad to see many of you know this but we shall see the thumbs down from the deniers of truth.

What is the issue with leaf collection?

There are only 2 pickups per year, and they have to be bagged. Most leaves end up in the gutter- clogging storm sewers and causing ice damns to build which break up the asphalt

Is the anger the result of thinking one must bag leaves now that the city has canceled the vacuum service? I ask that you forgive my ignorance, because bagging is unusual where I live. Most people just mulch leaves into the grass with a lawn mower and/or compost them on site. A street sweeper comes through once in early November to clear what blows in from common spaces and collects in the gutters, and homeowners pick up what remains. Nobody would dream of raking an entire lawn’s worth of fallen leaves onto the street. That would be unconscionable!

I think the anger stems from getting screwed by City Hall. When you pay city tax, you expect to get services, i.e. Police, roads, garbage collection, etc.

But despite making the city income tax permanent (it used to be renewed every six years by a vote), the level of city services are lower than ever. And it’s going to benefit a few fat cats, holders of public pensions, and the politically well-connected…. at the expense of taxpayers who are broke.

It’s why anyone with the means chooses to vote with their feet – but it also doubly screws the poor, who not only couldn’t leave before but the trap of high taxes forces them to stay.

Ah, I see. Sorry to side-track the discussion and diminish the seriousness of the problems with city services. I stumbled onto the former mayor’s videos of his on-going troubles with garbage collection recently, and I was flabbergasted. I do not recall things being so awful when I lived there, but it’s been more than twenty years since I moved away, so perhaps I’ve fallen prey to a set of rose-colored glasses. When I was in town for a reunion this past summer, the city’s decay was shocking. Dayton is not at all what I remember, and any fantasy I harbored of returning was well and truly crushed.

The leaf collection is horribly burdensome for those of us who are senior citizens and have mature trees. We managed it fine when the leaves were vacuumed from the street, like most area jurisdictions, but have struggled mightily these past few years bagging our 50 bags and getting them to the curb. Most of our neighbors have just given up and the leaves go down the sewer. This year we paid to have it done and hauled away – no doubt what the City wanted in the first place. Dayton is not friendly to its senior citizens!

None of your neighbors offer to help? How sad! My teenagers rake leaves and shovel snow for the two elderly residents on our block. I can’t say they’re always happy to do it, but it’s non-negotiable as far as I’m concerned. Looking out for each other is just what you do. Has that Midwestern neighborliness I learned as a child been completely lost?

The pile of trash that’s pictured in the post- has now grown to cover the entire side of the garage it’s next to.
Bagging leaves in decomposing paper bags- only works if they are picked up soon after bagging- not if they just sit out and get wet. When to rake depends on weather- and on wind- not on 2 set pickup days.
I have a black walnut tree in the back yard- it’s mulch is toxic- and kills grass and anything else… mulching isn’t an option.
Bagging takes a lot longer than raking to the curb and vacuuming-
And- with as many vacant houses as there are- the streets and gutters are getting filled despite the work of those of us that are left….
It’s a system that just doesn’t work. It’s good for the sale of bags though….

Yeah, after I made that last post, my husband and I chatted about this situation. One of the reasons the neighbor-helping-neighbor system works for us is that we have a diversity of ages on our street. There are younger people around to help out, and many of us do. But a neighborhood can reach a tipping point when there just aren’t enough able-bodied people there to pitch in either because the area has grayed or been abandoned. Sounds like there’s a bit of both going on in Dayton in addition to the degrading city services.

Good point, BTW, about the walnut toxicity. I had forgotten about that. We have maples and ash trees, which make for a great leaf mold.

Our ash trees here have succumbed to the emerald ash borers.

So far, no signs of infestation here in my part of the Front Range, but we know our days are numbered. We treat and keep our fingers crossed. There really is nothing like a purple ash in the fall!

I had totally blanked on the toxicity issues of black walnut trees, which makes leaf removal essential for most Dayton neighborhoods. The upset from residents over the cancellation of leaf vacuuming makes more sense to me now. And to top it off, the damage the leaves will cause to aging sewers is really going to cost the city money it doesn’t have if the situation isn’t rectified.

First they want to tax us for 20 years permanently; now they want us bag our leaves throw out common sense as the leaf bags is a no brainer and will get wet and go all over and never get picked up because they want us to work harder to give city hall more of our hard earned dollars to them for doing nothing.