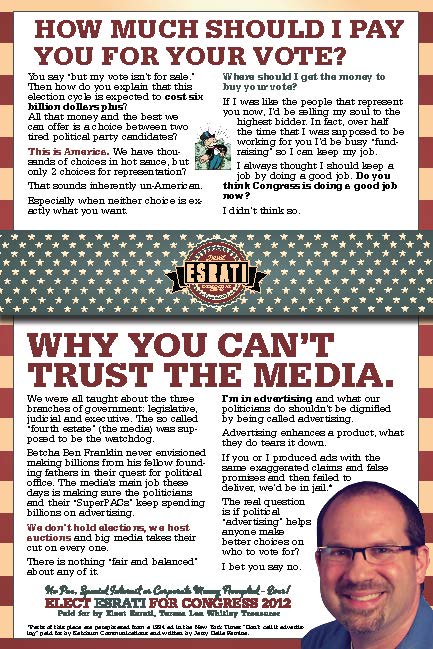 The definition of panhandling is to to stop people on the street and ask for food or money. Due to the botched economy, we’ve had sizable job growth in the field. Apparently, communities across OH-10 including Dayton, West Carrollton and even Beavercreek have been in a big rush to make sure those of us still with jobs don’t have to look the less fortunate in the eye as they try to survive.

We’ve been brainwashed to believe that these people are either a threat to traffic safety, or poseurs trying to swindle us out of our hard-earned money.

On Thursday, Jan 19th, 2012, I tried a little experiment in Beavercreek, outside the Greentree Group. They are an IT firm that does a lot of work for the government. They like to contribute to congressional campaigns.

Let’s look at their recent donations:

Don’t you wonder what Greentree Group gets in return for that money? We do pay our congressmen pretty well to begin with.

My experience panhandling outside the Greentree Group wasn’t quite the same. I documented it for you: 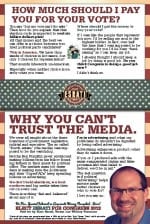 Net result: No donations. Only three people actually stopped to talk. As we left a Beavercreek police officer was pulling up. He then followed our car, and then pulled us over on suspicion of panhandling (even though the law was only given its second reading about 10 days before and wasn’t in effect yet). He was very cordial.

Obviously, we have different standards for panhandling- it’s OK for a congressman, not OK for a guy on the street. Yes, what Turner does- if it’s legal, is ask for donations without giving anything in return.

If you think standing on the street corner is undignified for a congressman, is it better to be selling your time and attention to the highest bidder while supposedly working for us?

Here is what my first campaign piece looks like. You can click on the image at right to download a PDF. It’s not like other political handouts- it actually has information on it. It’s time we stopped talking in soundbites and started talking about the real reason our country is in trouble: that our election process has become one giant auction.

We need to take the money out of politics, and stop pretending that there is a difference between campaign fundraising and panhandling.

If you agree- please consider making a donation to my campaign so I can get to Congress to put an end to this farce. And please, share this post with your friends. If I don’t have to buy ads on TV to get the message heard- we’re one step closer to success.

“We’ve been brainwashed to believe that these people are either a threat to traffic safety, or poseurs trying to swindle us out of our hard earned money.” Not the primary point of the post, of course, but the brainwashing/poseur comment caught my eye. First time I was approached for money was in a bus station.  Someone asked for a quarter for a phone call, which I gave him.  He headed straight for a cigarette machine and bought a pack. First time in downtown Dayton, the guy asked for a couple dollars for gas – his was at Miami Valley giving birth.  I wasn’t much familiar with downtown Dayton at the time, so I didn’t realize how fast one could have walked to MVH – and that there weren’t any gas stations along the way.  But I learned.  Which came in handy as that became the most common reason I was given for needing some money. Most of the times I’ve been to downtown Dayton were at night, so I didn’t run into much panhandling at the time. Now I live in the heart of downtown Seattle about two blocks from the Greyhound station and some organizations that provide services for the homeless, and panhandling is pretty routine in the surrounding blocks.  One woman has been trying to collect money to buy some diapers for her (unseen) 6-month old baby for a few years now.  Lots of people are trying to get money for bus tickets to Marysville – not exactly sure why Marysville, but it is always Marysville.  And a surprising number of young men come down from Canada and leave their (unseen) mothers in the (unseen) car while they try to get some gas money because neither they nor their mothers thought to bring credit, debit or ATM cards with them when the came to a different country.  Living downtown, I’ve learned to recognize the regulars. Poseurs do exist, and a lot of folks can’t tell the difference between those with needs and the poseurs.  If people want to make sure their money actually does help the way they intend,… Read more »

…and in the category of best leading actor in an act of political guerilla theatre, the winner is…

What will you do to shut down worse than out of state corporation Mexican criminal businesses like Taqueria Mixteca? Their business model is to bring in criminal illegal workers and pay them below minimum wage so they can undercut white owned businesses that pay their citizen workers living wages. They don’t hire white people and of course no black people. Then they take white peoples money and not only send it out of the state they sent it out of the country to Mexico. What will you do to these Mexicans that steal our money if elected to congress David? What will you do to help the less fortunate white people in Dayton were victimized by these Mexican criminals?

@The Middle Class- First- I’m not sure how you come up with criminal illegal workers- have they been convicted of a crime?

As to what I’d do- I’d go get a large cheese quesadilla from Paco – with a pure cane Mexican coke- and a big bowl of his tortilla chips with salsa and enjoy my $6 meal. Best Mexican food in town. When the immigration people shut him down- I’ll be sad- but, they will have to prove your allegations in a court of law. Not on my blog.

Ha! Thanks, David, for my best laugh of the day.

Nice post, you made me laugh and it’s certainly a good point. Money definately needs removing from campaigning and politics in general, It’s naive to think that anyone getting large sums of money from a group is never going to be influenced or asked for something when they get into a position of power.
I tend not to give money to panhandlers in the street, given them slices of pizza, coffee, chocolates or cigarettes but Im just that kind of guy.

[…] the Greentree Group is- they were one of Congressman Mike Turner’s biggest supporters (I made a video of myself panhandling outside their offices in one of my runs for Congress) up until 2012, when you could see their donations. Now, they may […]