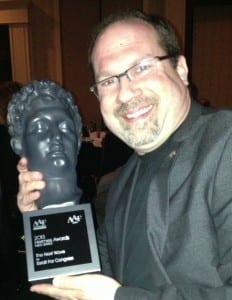 Usually when a Dayton ad agency wins a Hermes award at the AAF Dayton (formerly the Dayton Ad Club) annual Hermes award, the agency gives a short acceptance speech thanking the client, talking about how wonderful they are to work with.

I got to make an acceptance speech last night for my agency, The Next Wave, for work we did on my campaign for Congress last year.

“The client sucked, he has no talent” was my opening. Then I went on to remind 406 of my peers that most “political advertising” reflects poorly on our profession. I spoke of the ad done in 1994 by one of our industries greats, Jerry Della Femina, who wrote a full page New York Times ad “Don’t call it advertising.” I asked that if a candidate comes to them with a request to do a “I was born in ________, I went to ___________ school, I’m a (insert profession here) and I’m going to (insert adjective) (insert verb) for you, type ad- to force the candidate to talk about real issues- and make real promises.

Because in real advertising, if the product or service doesn’t perform as advertising- there are real penalties. In politics, they just get elected and re-elected. Unfortunately, this spot- and the one on foreclosures that won a Silver last year, didn’t get seen by enough voters to make a difference. For that to have happened, I would have had to raise at least $15K – a far deal less than Sharen Neuhardt spent on her botched run.

Here is the spot:

From winning the Hermes locally, it’s now entered to go to Regionals and then it can go to the National competition. There were over 433 entries, 238 got in ($65 an entry), a majority win bronze awards which aren’t eligible to move up, and each category (this won in the public service category) can  win one, maybe two golds out of a small pool of silvers. Only 24 Golds were awarded.

It’s a very tough competition, with local agencies doing work for Sears, Nike and other global clients. There is incredible talent in this city- much of it under-appreciated by local businesses. One former boss of mine had several entries win Silver for Chinese clients. Dayton can compete on a global stage.

Even though this spot and the foreclosure spot won, I’m most proud of the public information campaign I ran, where I posted video of almost every candidate at every candidates’ night- so that voters can be informed. It’s my goal to implement better ways for informing voters and change the nature of the process from mudslinging and money grubbing to discussions about the issues. To do that, I’ll need your support. Please consider donating to my campaign for City Commission where I’ve committed to run for under $10K.  Donate: http://electesrati.com/donate-2/

Now, out to collect signatures again in the freezing cold. :-)