The first time I heard the word capricious was in college. It was from my political science professor, Jim Jacobs at Wright State, in a conversation about the enforcement of historic zoning laws in Dayton. I felt I was being unfairly singled out for improving my $14,500 house, while a house in the Oregon District, owned by a judge (and now by library director Tim Kambitsch) had the exact same garage doors- yet I was being ordered to replace mine for being “vinyl imitating wood.”

He said the capricious enforcement of the laws was the problem. I had to look it up then. And it strikes me now as the essential problem in the United States.

Capricious is an adjective to describe a person or thing that’s impulsive and unpredictable, like a bride who suddenly leaves her groom standing at the wedding altar. You can criticize a fickle-minded person as capricious, but it could just as well describe quickly changing weather, as in “capricious spring storms.” 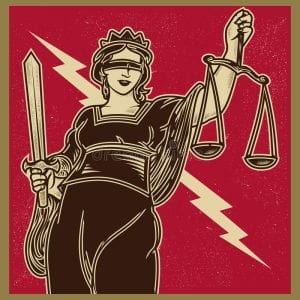 The whole premise of laws, and justice, is that the scales are balanced, fair and blind. In the idealized American dream vision, Lady Justice holds a fine honed sword, the balanced scales, and is blindfolded.

However, we know that more poor black men end up in prison than rich white ones, despite there being a whole lot less black people in the population. Five times more likely, to be exact.

We know that the likelihood of death by police shooting is much higher for black men than for white ones. Three times more likely.

All of this isn’t necessarily linked to the faults of the justice system, which may just be reacting to the built in biases and failures of our country to live up to the idealized version of America set in place by the founding fathers. We all know these near sacred words, in the second paragraph of the Declaration of Independence- “We hold these truths to be self-evident, that all men are created equal, that they are endowed by their Creator with certain unalienable Rights, that among these are Life, Liberty and the Pursuit of Happiness.

Yet, those truths aren’t really truths. The truth is, what makes someone happy actually may actually be the denial of others happiness. We could go down the rabbit hole of Karl Marx right now- and start discussing the merits of class structure and ownership of the means of production, but let’s just assume that we’re stuck with the systems we have, and why, when laws are made, they only have meaning when they are enforced equally.

The simplified rule of law; “the restriction of the arbitrary exercise of power by subordinating it to well-defined and established laws.”

And the more nuanced version via the World Justice Project:

1. Accountability
The government as well as private actors are accountable under the law.

2. Just Laws
The laws are clear, publicized, stable, and just; are applied evenly; and protect fundamental rights, including the security of persons and property and certain core human rights.

3. Open Government
The processes by which the laws are enacted, administered, and enforced are accessible, fair, and efficient.
4. Accessible & Impartial Dispute Resolution
Justice is delivered timely by competent, ethical, and independent representatives and neutrals who are accessible, have adequate resources, and reflect the makeup of the communities they serve.

When you look at those four pieces, that have to operate together, you start to see where we fail miserably in Dayton Ohio. Over and over, we have let little things slip by, accepted mediocrity and stripped away protections until we have reached a level of dysfunction that seemingly just can’t be overcome.  No one can keep tabs on those in power. We capriciously  create tax structures (Austin Landing having income taxes only on the working class). Things are done in private (school closing task forces). And, in order to enforce things as simple as the residency of a school board member- you are on your own.

And it gets expensive. Really expensive. Because the mistakes compound at an exponential rate. Need an example? How many lawsuits will we have to settle at the Montgomery County Jail?

Did I lose you?

One of the supposed fundamental points of differentiation between “liberals” and “conservatives” is the argument about the size of government. Conservatives like to complain about too much government and intervention, and liberals expect the government to solve all their problems.

Unfortunately, no one talks about too many governments.

Part of the equation of old was that the “Fourth Estate” would be a guiding hand to influence, shape and keep honest the other three- being the clergy, nobility, and the commoners. However, there was no official way to fund the workings of the fourth estate (sure NPR gets a pittance from the feds, but that’s not enough) and with the changes in technology and the media landscape, we’ve not figured out a new way to keep tabs on those in power- all of them.

We’ve allowed governments to multiply to a point where no one can keep tabs on all of it, and when someone like me, tries to shine a light on just one of the bodies of government, in this case, the Dayton Board of Education, we start seeing the raw underbelly of a beast that operates without checks and balances or even professional standards.

Part of the reason they get away with it is because the people they “work for” are too busy fighting for survival. Transplant any of the problems of DPS to a wealthier community and the outcomes would be much different.

Imagine if Centerville tried to throw a football game. The reaction would have been swift and deadly for those adults involved. A year and a half after the Dunbar/Belmont fiasco- Mark Baker gets moved out of his job (not fired) and all the building Athletic Directors lose theirs. That a district is moving to a system that hasn’t been done anywhere else in the State- and that it takes money away from teachers who counted on the extra stipend, is lost on this board of elected dilettantes.

In Tipp City, the athletic director hired some family members- and found himself out of a job and facing criminal charges. At DPS, we’re patting ourselves on the back just because no money was unaccounted for in athletics, and people who had “lost” money (euphemism for theft) were allowed to pay it back.

At this upcoming board meeting, the Superintendent wants to implement new salary guidelines for administrators based on years of experience and sizes of schools. Great. Yet, she turns right around and says something like “if it gives someone a $15K pay raise, we won’t do it, this is only for new people.” And, the board sits their and nods their heads in agreement? This is capriciousness at work.

One board member asks a question about contract bidding processes. Dr. Sheila Burton says something incredibly stupid- “We have a rubric for scoring proposals, but, we pick the best fit not the best cost” and the board member sits and lets this capricious horse shit answer fly. Nope, you don’t have a way of scoring proposals then, and you should be fired is the correct answer.

The board is about to grant all administrators and staff a 3% retroactive pay raise- because, well, the others all got pay raises. The admin/staff folks almost shut down the district two times because they didn’t want to pay the rank and file. We even spent over $200K to hire a staffing firm to back up the boards reluctance to negotiate- until they caved at the last minute. If you think you deserve a 3% pay raise- go to another district. The sad fact is, most of the people working at the top levels of DPS are making more than they are worth and our performance on state testing prove it. If this board agrees to a RETROACTIVE pay raise, they should be the first to be fired. We elected a new board because the last board kept telling us we didn’t have the money to pay paraprofessionals, and now this?

The reality is, if there was one county wide school board, we’d have money to pay teachers well. We’d have competent leadership, and we’d be able to keep track of things much better. This also goes for courts, police departments, city managers and everything else. Does Moraine, population around 6,500 really need a city manager? Who is paid $145K a year? That’s $24 a year out of every taxpayers pocket for a guy who does the exact same thing as the City Manager of Kettering- right next door- population 55,306, and gets paid $196,442 or only $3.55 per person a year. To go one further- Dayton City Manager Shelley Dickstein’s pay of $196,116 works out to only $1.40 per person. Start to see my point?

There is no more fourth estate to monitor the workings or misdeeds of all these banana republics- and that’s why we have capricious actions at every turn undermining the framework of our idealized democracy.

To leave you with a thought about all these governments running amok:

“Governments are instituted among men, deriving their just powers from the consent of the governed, that whenever any form of government becomes destructive of these ends, it is the right of the people to alter or abolish it, and to institute new government, laying its foundation on such principles, and organizing its powers in such form, as to them shall seem most likely to effect their safety and happiness.”

It’s time to ban capriciousness- or at least, make sure we can keep an eye on the people we do elect.

Because it’s costing us a fortune.

Do you think county wide school boards would work here in Ohio as they do in other states?

@David Johns, of all the governmental organizations that may be consolidated- school districts/boards may be the most difficult.
Safety forces, road crews, planning, zoning, tax collection, utilities, actual city governments will all be easier to consolidate.
Yet- there has to be a case study showing that county wide school boards would improve performance- which is all that really counts.