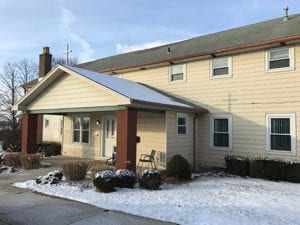 Apparently, the Sisters of the Precious Blood have lost interest in helping teen moms on a path to self-sufficiency. As of March 31st, 2017, the ten girls who have been living in the converted convent on Denlinger Road will be homeless, as the un-Sisters take back their convent.

Since 2010, the building has been provided at a very reasonable rate to The Mustard Seed Foundation, a group home run by a former foster child who managed to overcome the challenges she faced, and who decided to do something to help young mothers follow in her footsteps to self-sufficiency.

Shondale Dorise (nee Atkinson) suffered through 21 foster homes on her way to becoming a teen mom. She credits her final foster parent as the one that showed her the pathway to success, which she is now sharing with others. In the last 6 years, over a 100 young women have managed to not end up as other victims of the system thanks to their time in the big house on Denlinger.

But, all that is about to an end. Dorise, who is now a nurse, and has built the program, only managed to raise half of the $60K she needed as a down payment on the ideal future home for her young protegees- the former Daybreak facility on Wayne Avenue- in my ‘hood, the South Park Historic District. After losing her place in line, that facility is now going to house young males aging out of foster care.

Finding facilities that are move in ready isn’t that easy and the clock is still ticking.

The Mustard Seed Foundation is kind of unique- the way they fund their services is through the state funding for foster kids- plus providing mental health services paid for by medicaid. It’s this unique combo that seems to make the program work- where others fail. They are the only licensed facility of their type in the state- and accept kids from all over. If anything, they should be growing and expanding- because the need is there.

Instead, they may be going out of business.

What’s interesting to me, a spectator on the world of social service delivery, is that you’d think that this would be a natural extension of the well funded country club for young mothers the next neighborhood over. Over in the midst of the Twin Towers neighborhood, where the struggle is real, is a castle on the hill- The Glenn at St. Josephs– a retreat, a compound, a resort, country club- I don’t know what to call it- for young mothers, heavily backed by the Mathile Family Foundation.

There, young mothers over 18, who have a high-school diploma or GED, can live in a mecca of motherhood as long as they have been drug free for at least 6 months before entering the pearly gates. There, they will be coached, coddled and trained for 2 years, while their kids partake in a private 5 star pre-school, as they get their life together. In fact, many of the Mustard Seed(lings) graduate to The Glenn as part of a natural progression.

Teen pregnancy isn’t going anywhere anytime soon. For the girls in foster care (wards of the state) The Mustard Seed Foundation has been a way to beat the streets. For those who live in dysfunctional homes, where they are following in their mothers footsteps (I was mocked in college for talking about a 22 year old grandmother in my neighborhood- the privileged college kids didn’t think that was even possible, and this was 1986 or so). Dayton Public Schools alone has plenty of young mothers who would do better in a supportive residential environment than where they are now.

That’s why TMSF was probably thinking too small when they were looking at the former Daybreak building- instead of looking for something bigger. If you have any ideas for a new home- you know of a viable facility- be it a former nursing home, group home, hotel, convent, rooming house, please drop me a line so we can try to find a new home for the Mustard Seed Foundation.

If you want to contribute to the cause, they have a donation page set up with Giving Fuel, but, you can save them the service fee by writing a check directly. They are a 501(c)3 and all donations are tax deductible.

I think that at least part of the former Naval Reserve Center on Gettysburg could become the Mustard Seed foundations new home, while the other parts could become a residential home for DPS students needing a temporary secure and safe place to live. Please, share any ideas you may have, the clock is ticking.

Please note:. The Sisters of the Precious do not and have never owned the former convent at 4880 Denlinger Road, Dayton.

Update- the Daybreak building on Wayne is back on the market- and I’m working to get the financing in place so they don’t end up on the street.
They are short about $15K right now.

You make me sick! You don’t even know what you’re talking about! Get your facts straight liberal!