In their rush to appoint Wilburt Shanklin to the Montgomery County Veterans Service Commission over the DAV recommended incumbent Tommy Adkins, the 7 judges who signed off on the appointment under the direction of Judge Mary Katherine Huffman, broke the law: 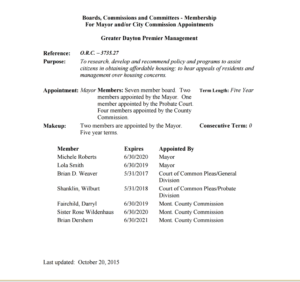 Maybe we should refresh the judges memory, since they previously appointed Shanklin to the board of Greater Dayton Premier Management, with his term expiring 5/31/2018 as shown in this City of Dayton document.

Considering the judges broke the law, the question is, who is going to set this straight? Will the County Prosecutor Mat Heck file charges against seven judges? Will the Veterans Service Commission have to waste time and money filing suit? Should the DAV have to spend money to overturn this travesty?

Considering they already swore Shanklin in a month early to the VSC, while he was still officially on the GDPM board, their action should just be negated.

As if this isn’t bad enough, word is circulating that Huffman has also decided to “rotate” judges out of specialized courts- removing Judge Dennis Adkins (no relation) from presiding over the Veterans treatment court which he founded and has successfully lead for 3 years now. Veterans advocate Elaine Herrick, who has been one of the driving forces behind the Veterans Court along with Ret. General Charles Metcalf  has vowed to work to find a challenger to Huffman in her next race and make sure she loses. Both Herrick and Huffman are republicans btw.

What has brought Huffman to think that she should be the deciding voice in veterans issues in Montgomery County is a mystery. Generally, going against veterans support organizations and systems is about as un-American as putting kimchi on your burger. Does she just have it in for anyone named Adkins? Is this a new psychiatric illness: Adkinsphobia?

If Huffman was so concerned with following the letter of the law in appointments to the VSC, the question still remains as to how Tommy Adkins was placed on the commission a year ago- since the DAV only submitted one name that time.

It’s time to stop playing games with the Montgomery County Veterans commission and the Veterans Treatment court. The question is which Montgomery County politician (I know you all read this blog) is going to step up and demand that the court stop meddling where it isn’t supposed to.

And you are not part of a DDn special investigation reporting team becuuuuuuuzzzzz????