In less than 15 minutes, the DPS board went into executive session- came out, and parted ways “by mutual agreement” with former Superintendent Rhonda Corr.

The payoff is the remainder of a years pay and bennys- around $115K. Not a good way for this board to start out- less than 30 days into their tenure, but, probably a lot cheaper than the legal bills a court case would run up. The lawyer who dug up all the dirt when investigating the Dr. Markay Winston EEOC complaint, Beverly A. Meyer, probably has made a small fortune already in legal fees in this long drawn out process. She was there tonight as the board announced their decision.

I’ll have a public records request in for the money spent on legal fees thanks to all this.

Board members John McManus, Sheila Taylor, and Robert Walker are all breathing easier. No lawsuit means no depositions. We may never know what happened in the all too frequent executive sessions that allowed this mad woman to run the district- excuse me, ruin the district, and still get a glowing review.

Corr is crazy enough to believe she’s still employable in education. We’ll see how much of her settlement is left after the insurance company is done collecting the money they paid her when her 2nd wife died- before she’d been divorced from the first one.

After the board adjourned, Board President William Harris spoke to the media, with tender Marsha Bonhart at his side. He handled the questions well, but did slip that the board will see what kind of applicants they get for the next Superintendent- meaning Dr. Lolli is still interim, and the board is thinking of seeing what they can get.

Here is the text of the official release:

AGREED PRESS RELEASE
The Dayton Board of Education and Rhonda Corr have mutually decided to part ways. Corr has resigned her position as Superintendent of Dayton Public Schools to pursue other opportunities in the field of education. The Board accepted Corr’s resignation at its special meeting held on January 30, 2018.

The Board and Ms. Corr have executed a separation agreement that provides for the continuation of Corr’s base salary, insurance benefits, and State Teacher Retirement System contributions through the end of her current contract year. The parties decided to forego the final two years on Corr’ s contract as both she and the Board felt it was in the best interests of the District.

Ms. Corr successfully tackled numerous issues confronting the District and continued academic gains during her time as Superintendent. Dayton Public Schools’ students and families are of the utmost Importance to both Corr and the Board, and both parties believe that moving forward is in the best Interest of all involved. The Board looks forward to capitalizing on the improvements it has realized in recent years and ensuring that the students of Dayton Public Schools continue to receive quality educational opportunities.

Unlike the last buyout of a high level employee, this time the board didn’t violate the agreement in the process- at least, in appearance, since I don’t have the actual agreement. Esrati.com will be requesting it as well.

The next question is when will strong leadership show up in this district to set a course and deliver results? 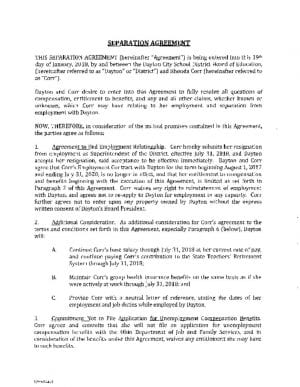 The separation agreement from the District- Harris hadn’t signed it yet.

31 Jan, 2018- I got the separation agreement. It is through the end of the school year- not the calendar year.

The board gave Corr a get out of jail free card, which may or may not stand up in criminal court, with clause 6B:

For valuable consideration received, the sufficiency of which is hereby acknowledged, Dayton forever releases and discharges Corr from any and all claims and/or causes of action, known or unknown, which Dayton may have or could claim to have against Corr up to and including the effective date of this Agreement.

The agreement was signed on the 19th of January, and Corr’s right to revoke it is over.

I am full and fed up w/this continuous BS of the corrupt getting even bigger buyouts to go away. It is not like Dayton is a rich community with resources abundant. WTF. It will stop hurting, won’t it?

While I’m skeptical any significant change can happen with DPS, it would at least be interesting to see them make a decision to do something differently for once. Everything I’ve seen for myself points to more of the same. Do you have someone specific in mind for who you’d like to see replace Corr?

@David- there is one person who has the credentials and the knowledge of the district and the community that I’ve repeatedly said is the right choice: David Lawrence. However, he’s too honest for these fools.
He’s about to finish up his paid time off thanks to Rhonda Corr.
The board can go do a national search all they want- but, the clock is ticking and they are running out of time.
There are about 10 people who should just be fired- and the district would improve immediately. No one has the guts to do it.

Mr. Esrati: while there is still time, please “Google” Dr. Lolli and investigate her tenures at Barberton, Monroe (Ohio), and Middletown City Schools. Her management style mimics Rhonda Corr’s. She placed Monroe Schools in jeopardy with the state and blamed the Treasurer for her misdeed. Dr. Lolli directed the Treasurer to make payments from the Building fund for other purposes, if I remember correctly. Each district was extremely happy to get rid of her. Further, her reputation with the staff, especially at Monroe and Middletown, was the same as Ms. Corr’s—distrust and devious. I feel that if anyone can stop this train wreck with DPS and Dr. Lolli, it will be you. No one else has the platform that you do. Regards, B.S.