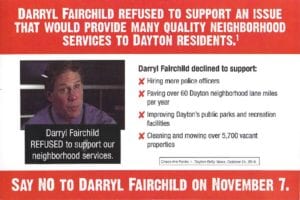 Full disclosure: my firm does work for Darryl Fairchild and Shenise Turner-Sloss. I’m also a member of both the executive and central committee of the Montgomery County Democratic party (and don’t recall voting to authorize this kind of dirty politics.)

I got a mailer today. “Darryl Fairchild refused to support an issue that would provide many quality neighborhood services to Dayton residents” – a hit piece, from the Montgomery County Democratic Party.

Problem is- Darryl is a Democrat.

He’s such a loyal democrat that he dropped out of the commission race 4 years ago, so they could give Jeff Mims his seat. They had told him, “it’s not your time” and we’ll let you run for the next seat- and then they picked Chris Shaw instead. Doing deals with the devil- will always get you burned.

A party that will do this to their own, doesn’t deserve the right to call themselves Democrats. This is a republican thing- eating your own. Or at least it should be.

Darryl wasn’t in support of Issue 9- which raised the income tax- to pay for some of the things they claim:

What they left out- was that Issue 9 created another quasi-governmental organization and handed them huge amounts of money to compete with Dayton Public Schools. And, the reason we have to raise income taxes to do the above? Is it because Joey Williams and Jeff Mims and their crew- give tax abatement to every big company that comes with their hands out.

Had Williams and Mims been good stewards of your tax dollars- they should have been able to afford all of the above. And, for the record, they have not “hired more police officers”- they’ve hired more replacement police officers to fill retiring officers positions. The force has not grown, and in fact may have shrunk. One thing is for sure, it hasn’t gotten any more diverse.

Taylor Communications, General Electric, Emerson, Midmark, and every other developer (except the guys doing the FireBlocks projects- who actually pay their taxes) all got tax breaks.

Nope- no mention of the fact that under Williams- 80% of downtown properties don’t pay property taxes.

Also, no mention of the money spent buying vacant buildings a half-million dollars each, and then turning them over to “developers” for pennies. All of those stupid deals have been covered on this blog.

The fact is, the party is scared and thought the right answer was to go negative.

Hopefully, the voters will see this as a desperation move- and do the same thing that they did to Rhine McLin after she sent out 6 negative mailings about Gary Leitzell, vote Williams and Mims out of office and vote for Darryl Fairchild and Shenise Turner-Sloss.

Dayton doesn’t need this kind of mud-slinging. What we need is real leadership.

That “refusal” was actually a call to budget better, plan better, separate out issues that should not be lumped together. Here’s what Darryl’s opposition looked like: https://www.facebook.com/FairchildforDayton/posts/1186633024735216

For those that can’t get to the Facebook post Mary Sue referenced- here is the piece written by Darryl- dated Nov 3, 2016: I’ve worked hard to convince the City of Dayton leadership to answer important questions about Issue 9 and to take steps to give citizens confidence in voting for Issue 9. Unfortunately, city leaders have not taken important steps. Last week the Dayton Weekly News published a Letter to the Editor I wrote. Dear Editor, City leaders have proposed a tax increase – Issue 9. They are asking us to make an extraordinary decision to fund universal preschool, something few cities do. They are asking us to make a difficult decision between helping 4-year olds who need quality preschool and taking money out of the pockets of more than 20,000 of our neighbors who make less than $29,000 a year. It is also a complicated decision. Dayton has combined increasing taxes for city services with the request to fund universal preschool. This combining simply confuses the issues. To be clear – I am a proponent of universal preschool. I have questions about the full proposal. I am fearful that the levy will not pass because the city has not completed its necessary work. I am prepared to assist to make the proposal complete. Here are the four things the city can do to make their case, even with only 2 weeks before the election. I believe if the city takes these reasonable steps, the whole community will get behind their proposal. Release the 2017 budget so that citizens can clearly see how the new dollars fit into the total budget.Currently, their proposal is puzzling. In March, the city reported increased income and a budget surplus. How did we go from a positive position to a deficit? In 2013, citizens voted to fund the same services we are being asked to fund now, when we made permanent the renewable portion of the income tax. What happened in 3 years? Police, fire, mowing, parks and roads cost – including the proposed increases – no more than $100 million. How are… Read more »

The new Democrats are not the Party of old. Read what Donna Brazile wrote about the recent election. Cronyism runs deep, and it’s pulling the Party away from its moorings. Even your own dig at Republicans shows an attitude of snarky partisanship the voters are tired of.

Mike- “Even your own dig at Republicans shows an attitude of snarky partisanship the voters are tired of.”
It wasn’t a dig- it was fact. Look at how many forces are coming in on congressional races in the R party- Luther Strange/Roy Moore in Alabama?
Primaries shouldn’t be things party politics should enter into- just let the voters decide.

Good news is Our Revolution is trying to get people out to vote for Daryl. I am a little confused why they are not supporting Shenise Turner-Sloss, but it is a step in the right direction.

“This is a republican thing- eating your own”

Seems to me it’s SOP, passed down from the highest levels of the Democratic Party…. Plus, it’s not the first time the local Democratic party has done this to their own though it seems you forget easily, considering it’s something you’ve criticized them for for years.

Esrati, I’m always entertained by your political zeal. That behavior that you hate IS the Democratic Party, at it’s very core. I left the party officially, in my mind and heart, 2 years ago. I left Dayton 4 months ago because I could not longer live in such an unlivable place. Hopefully I can sell my house. I did the bleeding heart Obama hopey changey thing and tried to “fix things.” I drank the Kool aid…but payed attention. And after 8 years of disgusting lies and failure I had enough.
I’m hoping you will have enough too. Soon. Because it’s much better on the other side. They don’t “eat their own” quite the contrary.

The return of democracy to the Montgomery County Democratic Party depends on YOU! – Esrati

[…] spend resources and money on mailings against “un-endorsed” democrats. See this post: Montgomery County Democratic Party eats its own  The party spent money to mail against a Democrat. A guy so loyal that 4 years ago, he agreed to […]

Who Should Be Elected To Represent OHD-39? Will The MCDP Decide — Or Will Democratic Primary Voters Get To Choose? « DaytonOS

[…] party aggressively supported Ward. This from David Esrati on November 2, […]