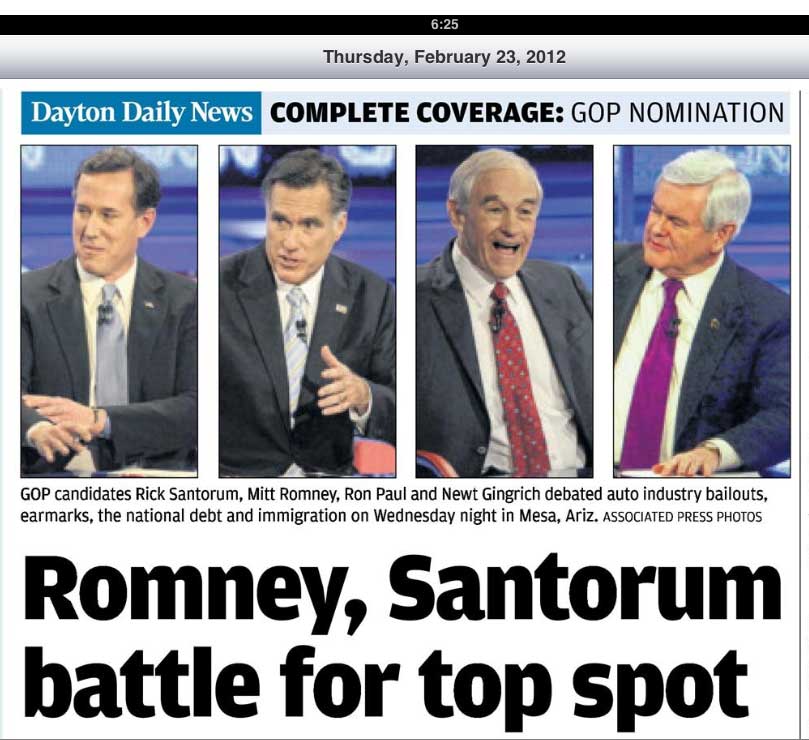 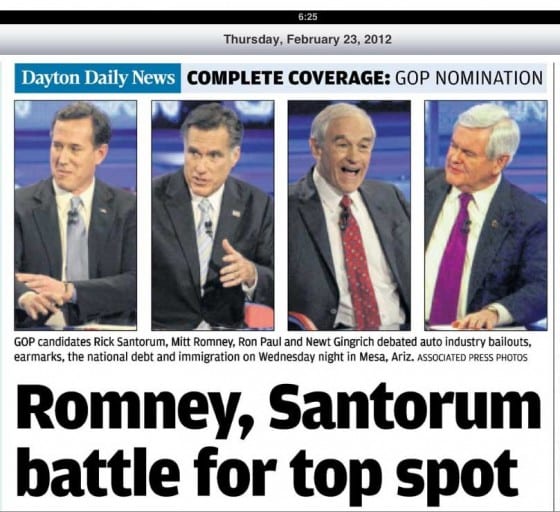 Which of these four candidates looks out of place?

Front page of the Dayton Daily News, centered, above the fold. Photos of the four Republican candidates involved in the Feb. 22, 2012, debate in Mesa, Arizona. If we ignore the headline that places  Romney and Santorum as the only two possible contenders, and just examine the picture spread, we have 2 candidates looking thoughtful, looking to the left, one candidate looking to the right with an expression that looks like he’s a jack-in-the-box, and then a disgusted looking candidate looking back over the field, dejected.

If pictures tell a thousand words- what do these four pictures, together with a headline, do? Minimize two candidates-clearly mocking one, Ron Paul, and setting Gingrich aside as a spectator at a train wreck.

Photo choices by media outlets convey bias as much as words do.

Editorial note- this type of “debate” isn’t really a debate at all and the coverage of these events does little to illuminate the candidates’ positions. Most of the time is spent name calling, or discussing moot points on “Hot Button Issues” that most likely will be decided by the Supreme Court. If you make your voting decision based on this type of information- you are, and will forever be, misinformed and under-informed. It’s why, besides taking the money out of politics, we also need to create a mechanism to give equal opportunity to communicate with voters, a much shorter political season, opportunity for minor parties to actively engage in the process and a voting process that doesn’t make the people choose between the lesser of two evils when they cast their vote. See this post: http://esrati.com/choice-american-as-apple-pie-unless-were-talking-politics/7005/

Well Ron Paul does look immensely more friendly than the other three. I don’t know if I can ever see Santorum’s smug, arrogant, funny looking face and not want to pound on it though… and I’m a very non-violent type of person.

Could be worse, they could be publishing the election results a month before the primary.  Bye the way, your going to have a respectable 3rd place finish in the primary.

Tom says, “yes believe it or not I know the difference between your and you’re and are and our.”

Dan says, “I don’t know if I can ever see Santorum’s smug, arrogant, funny looking face and not want to pound on it though.”

Actually it’s pounding that produces santorum.  That and poor preparation.