I left the US for Israel for a short trip, just after the police shootings in Dallas where 5 cops died at the hands of a black military veteran. I said on Facebook, that I never thought I’d say that I ever thought I’d feel safer in the Middle East than in the Midwest- but, here we are in 2016 and that’s what was on my mind.

In Israel, there are guns everywhere. Soldiers, male and female, with M-16’s slung around their necks- some of the girls in a uniform with a skirt even. The fully loaded clip is usually either attached to the butt or barrel of the weapon- with an elastic band, or some have them on their belts, on their back left side- often with a dummy cord attached.

Then you’ll see some with the clip in. I’ve yet to figure the rhyme or reason to who does what. It’s almost as if it’s a matter of personal preference. And it’s not only M16’s- it’s M203’s (an M16 with a grenade launcher), or the new Israeli weapon- the Tavor, a badass looking bullpup. Often, the weapons look well used, and have night sights. Even on guard duty- soldiers seem relaxed and at ease, sometimes playing with their phones, with head phones in. It’s a creepy casualness while under arms.

There are also people in civilian clothes- carrying a pistol- in the restaurants, next to the swimming pool. You have your bags inspected when going into a bus station. There are zig-zag checkpoints where they ask you to roll the windows down and look in the car.

On the Kibbutz, I asked what a block building with no windows was. “Bomb shelter” was the answer. They don’t use those as much anymore- since every house built since 1991 now is required to have a bomb shelter built in.

Along the highway, you may see a pillbox at a bend in the road, or a small fortress. Thin gun slits, reinforced roofs. Even going into a restaurant area, there is a guy with a shirt that says “Security” in English sitting next to a gate to get into the area. No gun visible, but probably within quick reach in the small gatehouse he’s leaning against. 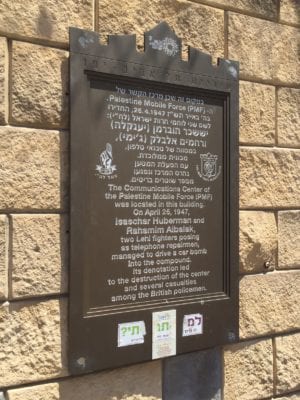 The first historical marker I came across when leaving the train station from the airport, in Tel Aviv said this:

The Communications Center of the Palestine Mobile Force (PMF) was located in this building. On April 25, 1947, Isaschar Huberman and Rahamim Abalak , two Lehi fighters posting as telephone repairman managed to drive a car bomb into the compound. It’s denotation )sic) led to the destruction of the center and several casualties among the British Policemen.”

Yet, the shooter is quoted in the same NY Times article from his social media postings:

“One hundred percent of revolutions, of victims fighting their oppressors,” he said, “have been successful through fighting back, through bloodshed. Zero have been successful just over simply protesting. It doesn’t — it has never worked and it never will. You got to fight back. That’s the only way that a bully knows to quit.”

Like it or not, police are the easiest targets and the people who have been doing the dirty work of a system that has gotten out of control. Our nation has been divided since the “War on Drugs” started – a lame excuse for imprisoning millions of people- mostly for being poor and black.

The real targets own the media, the banks, the wealth and control the system. A system that has profited wildly by distracting people from their true enemies. Sure- we can say Osama Bin Laden was a terrorist, but his targets were the scions of commerce, of the military industrial complex tasked to keep war a multi-billion dollar industry. A stock market rigged to allow a few to pilfer the savings and futures of an entire country.

Unfortunately, the police are just the pawns in the game, and so are the politicians.

And when you think about it- the rich have their own police forces, their own safe rooms, their gates, their security. The cops don’t. They are just sitting ducks. And soldiers coming back from an endless pointless war are taking up arms- but, it’s harder to kill a bank president than it is a cop.

Americans are about to go to vote for a new president holding their noses. A law passed against keeping the last true hero of the people prevents Obama from running for a third term. He’s far from perfect, but a better choice than either of the two leading contenders.

In Israel, much like the US- I talk to US citizens who have been here a long time- they aren’t worried about abortion, guns, or bathrooms- it’s about Israel- and they are more likely to vote for Trump than Hillary. Bernie, the only Jewish candidate, gets a thumbs down- because he wasn’t pro-Israel enough- as if he could have succeeded anywhere near what he did if he’d let his religion be front and center.

Right now our country needs to realize that the first shots of a revolution have been fired, and there will be more, until we stop trying to sugarcoat the misdeeds of a system that has created a permanent underclass, of people without hope, without power, except by the barrel of a gun.

One man’s terrorist is another man’s freedom fighter isn’t new.

We need to have a real discussion of what kind of America we want. Because what we have isn’t working for an awful lot of people, and in the last 2 weeks, some have taken up arms to send that message. It’s up to real leaders to acknowledge it and respond appropriately.

We have two choices: create a siege mentality, and set up security gates, ID Checks, and lose any semblance of the freedoms we swore allegiance to, or begin to level the playing field- putting the real criminals in prison and letting the pawns out.

Philandro Castile was the symbol, of a revolution. An everyday guy, who was loved in his little world, who had been systematically singled out by a society for little infractions, that turned into a death sentence. Meanwhile, the Wall Street criminals, who stole our pensions, our homes, our tax dollars and ruined the global economy- causing job losses and global instability- walk scott free.

It was never gun ownership that gave you freedom, it was what you do with one.

Gavin Long may think he’s a freedom fighter, but he missed the real targets.

We don’t need anymore police killed. Rome has been burning for a while. It’s time to take down the emperors, not their soldiers.

…second thinly veiled justification for homicide you’ve penned in a week, David. All those intellectual gymnastics have to be mentally exhausting. Go rent a rom-com and take a break…

Why are there not more voices speaking out on what you are seeing so clearly, David???  Fear? Conformity? Lack of knowledge or insight??  Whatever the reason, the sickening silence of the many in the face of the unwarranted injustices to minorities is both frightening and appalling.  Please keep speaking out!  It won’t be long before those who are sticking with the ‘party line’ will find out how they’ve been played by a rigged system of propaganda and greed.