A bit of time has passed since I gave the single finger salute, yelled an expletive and left a West side church with an escort.

That night, I went and composed a letter of apology to the pastor at Wayman Chapel AME and sent it. It was copied to a few people who also know the pastor,  to make sure he got wind of it.

Pastor Cooper,
I owe you, and the good people of Wayman Chapel a deep apology. There is no excuse for what came out of my mouth in your church.
I’ve been to Wayman many times- and have almost always felt welcome.
The reason I say almost, is I’ve been told several times at candidates events not to video the event- which I find curious, because I thought we held these events to inform the public.
What happened tonight was something that’s never been done to me in 26 odd years of being in local politics.
I’ve spoken in chambers, I’ve spoken in churches, in neighborhood meetings.
I’ve handled hecklers. I’ve been called names. I’ve even been arrested- because I stood up when no one else would- but, I’ve never had a microphone cut off- and been given such a smug response.
That is an issue I have with Pastor Johnson. I would welcome your guidance in mediation on this matter.
Churches are special places-
places where people come to heal, to come together- not to censor and disrespect.
I had no business saying what I said-
I should have been a bigger man-
but, I wasn’t.
For that I’m deeply sorry.
I hope you can accept my apology.

To this day, no response at all. 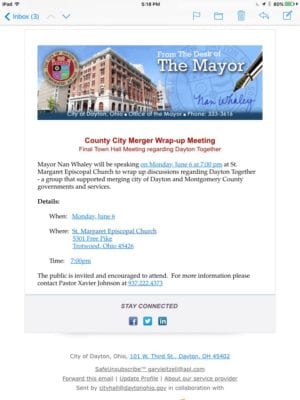 At the third meeting, held in a Trotwood church on June 6th, I was met in the parking lot by a lot of the same people who surrounded me at Wayman- sporting new “Wayman Security Team” t-shirts. They wouldn’t let me into the public meeting with my camera to hear the speeches of the politicians explaining why they had held two meetings about a regionalization plan that they had already managed to subvert- long before the meetings. The invite on city letterhead from Mayor Nan Whaley is at right. I stood outside and held my cell phone to record it. I pointed out to many public officials as they entered that this wasn’t a legal public meeting. Right up until three Trotwood police cruisers showed up, and I was told to leave the “private property.”

And, btw, if I wasn’t white, I’m sure I wouldn’t get away to talking to these officers the way I did, even though I was totally within my rights.

Using churches for political meetings is a violation of the Johnson amendment.

Organizations recognized under Section 501(c)(3) of the U.S. tax code are subject to limits or absolute prohibitions on engaging in political activities and risk loss of tax exempt status if violated.[3] Specifically, they are prohibited from conducting political campaign activities to intervene in elections to public office.[4][5]

This was clearly a political meeting and an attempt to intervene in elections, especially when a member of the press is banned. For years, we’ve let the Black Ministerial Alliance be a part of the political process in Dayton when we shouldn’t. And, if one looks at the conditions of the West Side, the people of West Dayton should be asking themselves twice why these men of the cloth are the ones driving the late model Benz’s while their flock is living next to a drug, whore or vacant and dilapidated house.

My neighborhood has seen steady improvements in property values over the 30 years I’ve lived here and been a part of my community, South Park. Pastor Cooper had yet another shooting outside his  church’s front door last night on Leland Avenue in Westwood- recently called  out in the Dayton Daily news as the most troubled neighborhood in the city and where property values have plummeted.

The difference between Pastor Cooper and Pastor Johnson and me? I actually know and go to their neighborhoods. I believe actions speak louder than words.

The real question is what are the political geniuses of Dayton who sponsored this meeting up to? Why did they hold three meetings when they knew this plan was already toast? What was their goal in stirring the pot?

Regionalization is a very serious subject and one that needs to be addressed. These meetings, which I put on Youtube, were all about what they were against, not what they are for. They have no plan, other than to stick their heads in the mud and reject any change. The status quo is fine by them.

I went to the meetings so that the public would have full unfettered access to what was said.

Why haven’t the organizers posted video? Where is their website with a discussion of the issues? What are their plans to improve conditions in the very neighborhood where they stood and preached at will about the evils of the only regional plan on the table.

And, why would they have meetings in churches, run by pastors, if this is publicized on official city letterhead?

If you ask me, the people who lead these meetings should be the ones apologizing for their failures to the people of Westwood, for letting the community rot, while proclaiming that they are fit to lead this community.

Excellent work! These phonies & crooks need to be exposed for what they are and you have the truth, plus a set of brass, to back you up. Keep being you. And thank you for your service to the community in this life-compromising pursuit of holding these “leaders” feet to the fire.

What are they hiding and why? If they have the coppers securing their turf, it must be on the square, unless they are also a part of the problem?