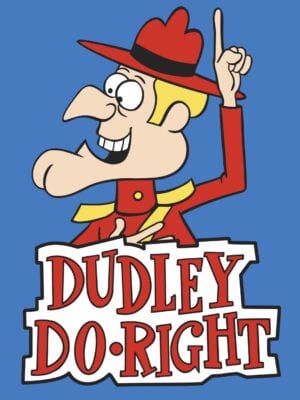 There was once a cartoon police officer, his name was Dudley Do-Right, yes, he was a Royal Canadian Mounty, but the idea of a conscientious, well meaning police officer is something we seem to have lost. Need proof? American culture used to celebrate lawmen on TV, from Joe Friday in Dragnet, to Marshal Matt Dillon in Gunsmoke and even Inspector Gordon on Batman. Then things changed. “Dexter,” was about a police forensic technician/serial killer, was a “good guy”- and “The Shield” was about a posse of cops with questionable ethics. Clint Eastwood as “Dirty Harry” was “cool” with his “Go ahead, make my day” line as he’s considering being judge, jury and executioner.

The last bastions of professionalism of police went out the door when policing became reality TV- with the show “Cops” where people at their worst became entertainment for the masses.

Somewhere along the line, the very definition of being a police officer got fuzzy. And this isn’t a new discussion, it started as early as 1910 with police chiefs complaining about the way the “Keystone cops” made them look bad. For an excellent recap of the history of police in pop culture: Cops in Entertainment: From Bumbling to Hero. In fact, the Hays Code, a set of guidelines for self-censorship (later to evolve into our ratings system) run by the movie industry, launched in 1927, even had a rule about how to portray crime and criminals- “crimes can never be portrayed in a positive light and must be punished, and that authority figures (say, the police) have to be depicted with respect.” (Cops in Entertainment).

Now, with cell phones and body cameras and Youtube and Facebook offering not only video for review- but even livestreaming events as they happen, censorship and the revisionist history of police after action reports is out the window. Not only does it change the dynamic of policing, it changes the entire justice system that is now almost demanding video or it didn’t happen.

Yet, for most police in this country, their day in, day out routine is nothing like what we see, share and talk about. There was a time that a police officer could spend an entire career and never fire their weapon- or even un-holster it, even in a city like Dayton- not in Mayberry R.F.D. The idea of what a police officer is supposed to do is summed up with the phrase “To serve and protect” but, if you asked people today, especially in minority communities, it would be “to scare and persecute” and you’d have a hard time proving that wasn’t the case.

America today, with it’s “law and order” mandates is as far away from “land of the free and home of the brave.” We incarcerate more people, for longer, than any other industrialized country. And, as a percentage of population, minorities make up a higher percentage of their population. This is not just a police thing, it’s a government thing, a judicial thing, and a failure of our culture to do the right thing. At the root of all of it is systemic poverty and institutionalized racism- and sadly, money buys both politicians and freedom in this country. The rich do not go to prison anywhere near the same as the poor. So much for “We hold these truths to be self-evident, that all men are created equal” when in fact, they truly aren’t.

There is some kind of misunderstanding in America that one political party claims to be on the side of “Law and Order” while the other supports a “welfare state” without using critical thinking skills to address a fundamental failure of logic- it costs a lot more to provide room, board and health care in a prison, than it costs to provide affordable housing, education and health care for all. We’ve literally made mass incarceration into a private business model.

While there are people who believe that “originalism” is a viable way of interpreting the laws, the founding fathers would surely be rebelling against a system that denies “Life, Liberty and the pursuit of Happiness” to so many. Our police officers are only one cog in the machine, and for right now, they are under a microscope for the actions of a few bad apples.

Yet, the damage that Derek Chauvin has done to their profession with his 9 minute knee to the neck of George Floyd is far from the first or last incident that demeans their profession. This video, of two “peace officers” pulling their guns on a US Army 2nd Lieutenant Caron Nazario, in uniform, over a license plate, shows how far away the profession has fallen from “to serve and protect.”

If a sizeable percentage of the population fears the police, their profession is doomed. What was once an honorable profession, is now one that will only attract the people who should have their sanity questioned for choosing this line of work.

Politicians have already started to attempt to change the protections that have been in place for police for decades. Maryland legislators overrode their governors veto and made wholesale changes to protections of police officers in doing their job:

The wide-ranging changes were intended to address many of the concerns raised by demonstrators who have protested police violence after the deaths of Mr. Floyd, Breonna Taylor and other Black people killed by officers.

One section creates a new statewide use-of-force policy and says that officers who violate those standards, causing serious injury or death, can be convicted and sent to prison for up to 10 years. The standard says that force can be used only to prevent “an imminent threat of physical injury” to a person or to “effectuate a legitimate law enforcement objective.”

The policy also says that force must be “necessary and proportional.” Police reform groups said that was a tougher standard than the traditional “reasonableness” standard, which they said was not sufficient for holding officers accountable for blatant acts of violence. Mr. Consoli said the change would deter the police from intervening in volatile situations and open them to more “Monday morning quarterbacking.”

In another change, law enforcement agencies statewide must establish a system to identify police officers who are considered likely to use excessive force and to retrain, counsel or, if needed, reassign them.

The legislature also repealed Maryland’s Law Enforcement Officers’ Bill of Rights, which was the nation’s first such law when it was enacted in the 1970s. It gave every officer statewide the right to appeal discipline to a local board, regardless of a city’s wishes.

Maryland lawmakers replaced those protections by requiring every county to have a police accountability board to receive complaints of misconduct from the public.

While we spend trillions on “National Defense” and projecting power in Afghanistan, Iraq, and across the globe, we can’t seem to invest in protecting our citizens in a real and meaningful way. If the job of a police force is to “serve and protect” we wouldn’t have near as many deaths of people armed and unarmed in this country. We wouldn’t have so many people in prison for crimes of poverty, or for lack of suitable mental health treatment. And, police wouldn’t have a proportion of the population living in fear. The 2nd Lieutenant was being pulled over for not displaying a license plate- and was in uniform. By the way, a “police officer” who can’t tell the difference between an officer and an enlisted man in uniform, has no business being in a uniform.” We also need to reassess the practice of using military gear for policing. We have misguidedly turned our own streets in America into a war zone without even thinking twice about it.

In the military, when there is a need for a massive re-alignment of values, or retraining, they do a “stand down” where the entire force is refocused and retrained to address a particular value/process. It’s time for police in the United States to do the same. It’s time to create some national standards and rules of engagement that are universal- especially about use of force, rights of citizens to be appropriately informed when pulled over, and last but not least, to have body cams in place at every interaction. There also needs to be a new approach to training police officers and a much longer probationary period before they are allowed to have the power of life and death over citizens on the streets. When you realize that two of the four officers involved in the murder of George Floyd had police careers measured in days, it becomes clear that something is severely broken.

America needs to also re-evaluate what having police powers means. The proliferation of private police forces for the rich- be they hospitals, universities or parks districts, creates different standards of accountability to the public. It’s time for a massive re-alignment of departments with minimum size standards and all must report to elected officials- not CEO’s or College Presidents (See the murder of Samuel DeBose).

What would this newly trained and organized police force look like? What standards would they have? What protections would they be afforded? It’s something we, working alongside police departments, unions, police officers, judges, lawmakers need to decide and work toward, because if we don’t massively overhaul the system, the system will fail us all. It’s time to make sure Officer Do-Right makes a comeback.

I believe so strongly that America needs to change the way that it does policing that I produced two series of ads for use by the BLM movement, or people who agree that this isn’t working. They were entered in the Cincinnati chapter of the American Advertising Federation ADDY awards, where they won Gold at the local level and advanced to win Silver at the Regional level. Silver entitles you to advance the campaigns to national, which I’ve done. We won’t know the results for another month. 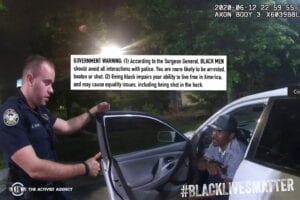 GOVERNMENT WARNING: (1) According to the Surgeon General, BLACK MEN should avoid all interactions with police. You are more likely to be arrested, beaten or shot. (2) Being black impairs your ability to live free in America, and may cause equality issues, including being shot in the back. 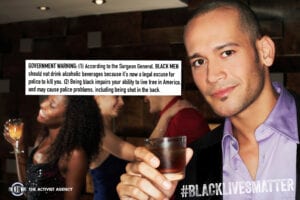 GOVERNMENT WARNING: (1) According to the Surgeon General, BLACK MEN should not drink alcoholic beverages because it’s now a legal excuse for police to kill you. (2) Being black impairs your ability to live free in America, and may cause police problems, including being shot in the back. 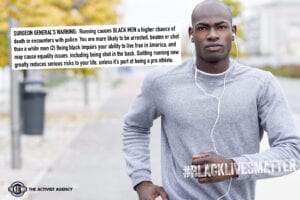 SURGEON GENERAL’S WARNING: Running causes BLACK MEN a higher chance of death in encounters with police. You are more likely to be arrested, beaten or shot than a white man (2) Being black impairs your ability to live free in America, and may cause equality issues, including being shot in the back. Quitting running now greatly reduces serious risks to your life, unless it’s part of being a pro athlete. 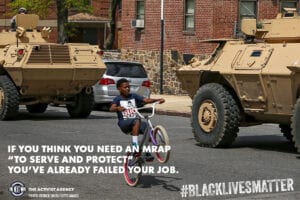 IF YOU THINK YOU NEED AN MRAP “TO SERVE AND PROTECT” YOU’VE ALREADY FAILED YOUR JOB. photo PATRICK SMITH/GETTY IMAGES 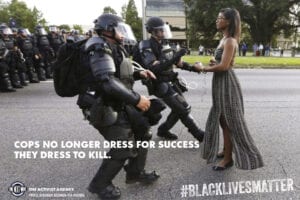 COPS NO LONGER DRESS FOR SUCCESS THEY DRESS TO KILL. Photo by JONATHAN BACHMAN FOR REUTERS 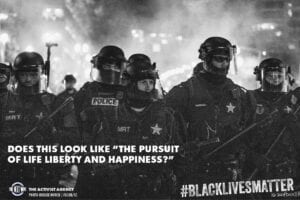 DOES THIS LOOK LIKE “THE PURSUIT OF LIFE LIBERTY AND HAPPINESS?” Photo ROSCOE MYRICK | FLICKR/CC

Consider your average police officer receives 2 hours per year in how to grapple and control a suspect. How Jujitsu training could revolutionize policing. Worth a listen.
https://podcasts.apple.com/us/podcast/making-sense-with-sam-harris/id733163012?i=1000517415557