I think the thing that bothers me most about the Dayton City Commission- and our city hall in general, is that other than John Gower in Planning, no one seems to bring forward new ideas, innovative ideas, on their own – and tries to make them fly.

It’s a siege mentality downtown, and has been for years. It’s one of the main reasons I stopped going to city commission meetings, for all that brain power in the room (they insist on having every department head at every commission meeting, “just in case” a commissioner has a question) no real, substantial discussion of issues takes place in public.

The last person to challenge that much was Abner Orick- but his style was ambush, confrontational- instead of collaborative and useful. 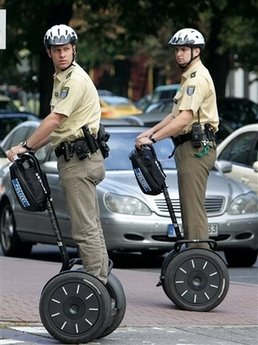 Last week while I was making a bank run on my scooter, I saw a meter maid sitting in a boat of a car. It was a nice day, and frankly, I was enjoying my bank run as a chance to get out in the sun. And I thought, what a perfect job to be doing on a Segway scooter– it’s electric, it zips around downtown parking spots easily- and it actually makes it easier and quicker to dispense tickets – and wouldn’t impede traffic while stopped to write a ticket (like the boat). Figuring the car, riding around downtown for 8 hours a day, with the engine going on and off, and gas at $4 a gallon, probably costs close to $40 a day, a Segway would pay for itself in less than one year in gas savings alone, never mind cost of the maintenance on a car.

It would also make Dayton look a little hipper, more environmentally friendly, and forward thinking. Maybe, it might even give them some of that “The Greene” feel- that they so desperately want (the security people at The Greene ride Segways).

We have sidewalks wide enough to handle scooter and bicycle parking (and the cops and safety building employees parking their motorcycles) I’m sure we could handle a couple of Segways.

Oh yeah, the city could have bought 2 for the same price they paid to send the commissioners on their 5 day vacation, but, who are we kidding, tax money isn’t like spending real money.

(and I’m sure someone will write to tell me that Dayton has probably banned Segways from the sidewalks in their infinite wisdom).

Put them on bicycles or unicycles. You could purchase several for the price of a single Segway. I’d argue the later is more “hip” than a Segway.

We could put them on skateboards too- but, I think it’s illegal to skateboard downtown too.

Maybe this is asking too much, but is downtown Dayton so large that the meter readers can’t just WALK? Buying comfortable walking shoes for the readers is even cheaper than bicycles.

Jeff II-
No, only the post office would subject it’s employees to actually walking. Of course they could walk- but, there is probably a union clause that says they can’t. The guy who empties the meters walks btw.

The city provides its employees with shoe vouchers each year, and the exercise would reduce future health care cost.

I happened to be downtown today and saw a meter reader drive by checking meters. This post was the first thing that came to mind. Why in the world arent they walking to begin with? I would guess 3-4 walking meter readers could have a loop system whereby every meter is crossed every 30-45 minutes.

Hi Dan-
Glad someone reads this- and thinks about things like this (other than me).