Last Monday night I had a candidates’ night over on Burkhardt. I noticed the church had a rim out back without a net- and that there were courts just up the street that I hadn’t put nets on. Unfortunately, my ladder wasn’t in the car (my mom had been grocery shopping) so I went back Tuesday morning before work and took down the rusted chains and put up 3 nets- stickers and stencils.

The park was in horrible shape. According to Google maps- it’s called Orville Wright park. Orville would have been ashamed. The courts were strewn with broken glass- and weeds. The backboards were rusted. The playground equipment had a wall of weeds- taller than the kids it was designed for- and trash was everywhere. I made a plan to come back on Saturday to clear it.

The weeds and glass owned the court

The crew who cleaned up Orville Wright park

John was wearing the dirt off the court

Orville Wright Park after we’d cleaned it up.

Friday I got a message of Facebook from a woman, Tabatha Muntzinger, who lives near the park, but hadn’t taken her kids there until Friday. She was disgusted and had seen my stickers- and looked me up, and was trying to figure out who owned it- the city or Dayton Public Schools. I told her I was planning on going there on Saturday to clean it up. She said she’d help. So today at 11, we started. We had help from her husband Kyle, who used to teach Social Studies at Belmont, and Lewis Gast and his stepson John. Four and a half hours later it looked totally different. Some neighborhood kids even showed up and helped. We filled Lewis’s pickup truck with weeds- just from the courts. Tabatha repainted the 3 backboards. A neighbor from across the street came by and thanked us.

But what really ticked me off today, was the announcement in the paper that the city commission just approved half a million dollars to demolish four remaining outdoor pools. Burkham, Mallory, FROC and Stuart Patterson. We always seem to have money for demolition- but, we can’t find the money to put up nets and paint backboards and repair basketball rims.

The same contract includes $215,000 to expand and upgrade the Mc-Intosh Park splash park and $80,000 to begin smaller improvements at the Five Oaks, Mallory and Stuart Patterson splash parks.

Splash parks are small, zero-depth water play areas that spray water from colorful structures….
The city once had seven outdoor swimming pools, but Parlette said six of them closed between 2004 and 2009, leaving the Fairview pool near Good Samaritan Hospital as the only outdoor option. The city has indoor pools at its three recreation centers.

Apparently, kids don’t really count for Commissioners Whaley and Williams- because they don’t donate to their campaigns.

Of course, you can’t learn to swim in a splash park- and the Army doens’t have a splash park test. So more poor kids won’t know how to swim- something that can save their lives- and also – is a great way to stay out of trouble in the summer.

In fact, while the five of us were doing what the city couldn’t I had to see this on my Facebook feed: 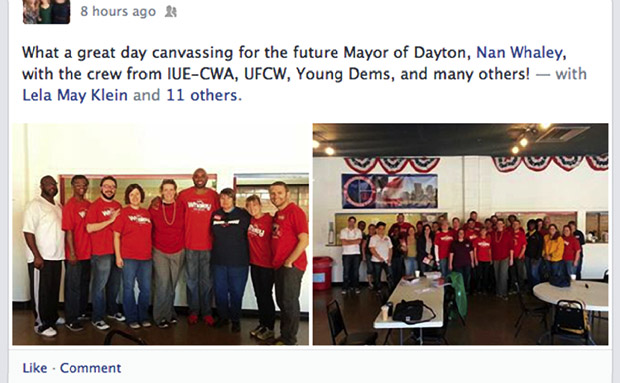 And, we got treated to hear that the $40 million or so we “invested” in Tech Town- may have a tenant for the empty building- soon. Really? We have money to build buildings with public money, for private companies- while we don’t have money to put up nets? Tech Town is corporate welfare- taking our tax dollars and subsidizing a few businesses- read on:

Two years after it was built, Tech Town business park’s newest building may soon have a tenant that occupies an entire floor, the president of Citywide Development said Friday.

“We have, right now, someone who has executed an L.I.

— that is, a letter of intent — for a floor” in Tech Town III, the third and newest building in the technology-oriented business park on Dayton’s northeastern edge, said Steve Budd, Citywide president.

“I can’t tell you who that is right yet,” he added.

Though used for community expos and meetings from time to time, the $9.1 million building that offers more than 60,000 square feet of space has remained empty since construction was completed.

The $40 million Tech Town business park has three buildings. The two older buildings are almost full, officials of Citywide have said. Citywide, the city of Dayton’s development arm, owns the park and acts as landlord to tenants there.

via Tech Town may get tenant.

In the pool article- there was this line:

“Quite frankly, (pools) are just more costly to maintain and operate,” Parlette said, citing staffing costs, water, chemicals and more. Parlette would not estimate a cost difference between pools and splash parks, except to say “it’s a big number.”

Mr. Parlette, pools are for everyone. Tech Town is corporate welfare. I’m sure, $40 million would have kept our pools open.

Great article David, I just love reading  your slingshot Blog’s that keeps hitting the Goliath’s in their keister, as well as open the eyes and minds, of Dayton’s thinking mass. You do know that you have the House of Sizer’s vote, but how absurd of me, sure you do?

Is David Esrati crazy? He say’s he is. Video proof

[…] I’m within $450 of my $10,000 goal. Please consider donating so I can totally concentrate on giving you the most bang for a campaign dollar the United States has ever seen. So far, I’ve hung over 250 basketball nets, 3 new rims at Princeton Rec Center, cleaned up broken glass and weeds on courts all over the city (including the ones yesterday with some help) […]

What bothers me most is….the tax dollars that come from our neighborhoods are not being spent in our neighborhoods! At all! From deteriorating sidewalks, curbs and roads to schools that are completely behind the times ….OH YEAH! THE PARKS, complete mess. Where the hell should our kids play while you throw all OUR money downtown. Where are the cops when a 1,000 dollar (10 piece) patio set gets lifted off the back porch at night.? WTF Dayton….WTF

Thank you for writing about Tech Town. Everyday I drive down Monument and see the empty ‘Smart’ office building and wonder what went wrong and whose money was spent on this failed investment. Hopefully the city recoups it’s investment but it looks bad right now.

David, I don’t know what continues to animate you and keep you pushing forward in the face of not only a powerful and destructive Dayton infrastructure, but I’m glad you have it and that you continue to act, to work, to make the ongoing effort it takes to make a city a community.  I left Dayton not long ago, sick at heart over its determination, as you noted, to commit only to ongoing and senseless demolition rather than maintenance and improvement of important and even historic educational and recreational structures like Julienne, Colonel White, Roosevelt, and the pools.   And you are SO right! demolishing those pools further impoverishes and disadvantages our poorest kids who won’t even have a chance to learn to swim!  AUGH!!!  We need to CLONE YOU!  ….. and sooner rather than later!

Read about our day from Tabatha’s blog:

You wanna see where all the money is wasted? better start looking inside those buildings at all the millions of dollars wasted on half brain ideas that already exist outside of Dayton. The newest…over $75k in the last 6 months to some company that wants to smart tag the products in television shows…anyone with Time Warner already has this. This company has no ties to anyone in the television industry yet Dayton and the State of Ohio keep dumping money into the program. That 1 occupied building is a farce to pay high end salaries to hacks that can’t get a real job. They are supposed to be creating jobs…but what the state and city doesn’t want to see is NET jobs, they don’t want that negative number showing up…you’ll only see reports on gross jobs created….the magical question…how many of those jobs and companies that have swallowed that money are still around???? NOT 300 like they claim. Wake up Dayton, you can’t remake Silicone Valley with old corrupted leaders that have no skill

Andrew- don’t be shy- name the company. Yes- we’ve seen a whole lot of bad picks by politicians- as if “drones” or “composites” or “bio-med engineering” are something that government can inspire/control (although thanks to regulations on drones- the government has both ends- the power to buy and where to fly).

I know the company of which Andrew speaks. First, all the principals are native Daytonians and would like to stay here. They’ve had several offers to setup offices in other regions notorious for tech start ups but decided to stay in Dayton. They are advocates of small business in Dayton and committed to growing the region–specifically in tech jobs. Secondly, the monies received was 75 thousand dollars as a LOAN with a proviso that the company create jobs in the region. Twenty-five thousand of that went to a local university to help commercialize research that a team of students and Ph.D.s had been working on. The contract with the city states that the company must have demonstrable milestones that hold them accountable for the loan. An estimated 300 technology jobs for the region are possible within the first 8 years of going to market, many of which are entry level and can be filled by local STEM school graduates.  Third, the company is cost-matching the loan with their own private monies that have been raised from investors outside of Ohio, bringing technology investment into the region. Fourth, they do indeed have contacts in the motion picture and television industry and are currently in negotiations with several major television networks with contracts pending as well as commitment from several well-known celebrity endorsers. What they haven’t done is hire executive management, corporate sharks, or headhunters from within the industry. They ARE a software company, after all. Instead, their focus has been on creating tech jobs that don’t require six-figure salaries to fill. Also, they are a privately-held company and many of their pending contracts are girded by strict non-disclosure, non-compete clauses. They’re working with intellectual property like upcoming shows that not even the gossip rags know about yet. The company held two public demonstrations of their patent-pending technology to demonstrate how light-years beyond it is from anything else out there. It basically allows you to shop for anything you see on any channel and purchase it instantly with just a click of your remote–something that not even Time Warner, Comcast, or any… Read more »