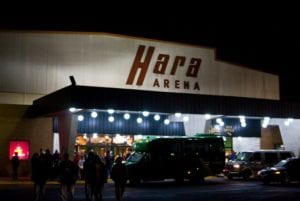 It’s time to stop playing around with the fairgrounds relocation. The first clue should have been when Hamvention moved to Greene County.

The second should have been when a local pro-sports franchise decided to sit out a season. Dayton built a really nice stadium for the Dragons and gave it away for 20 years. The Nutter Center stole hockey from Hara- very expensively, and then killed it because the building is a disaster to begin with.

Face it. Private enterprise can’t compete with public dollars- and we’ve done everything we can to put the Wamplers out of business, starting with the ridiculous tax burden which takes no heed of the economic development bonus they provided.

Yes, it’s now a shithole. But, dump $20 million into it, make it public, and voila- back comes Hamvention, back comes hockey, and who knows what else. Put the fairgrounds there too. Why not? It’s closer to agricultural parts of the county than downtown is.

And, Jackie Powell has it right:

Hara is a unique venue because it has an arena component as well as a number of different buildings,” (Jacquie) Powell  (president and CEO of the Dayton Convention & Visitor’s Bureau) said. “When you look at the Convention Center, it’s a different setup. The arenas are different too. For the summer months it makes it difficult for us to position groups there.”Furthermore, Hara’s 7,000-seat capacity was the fifth largest in the area — only 13,400-seat UD Arena, 11,000-seat Welcome Stadium, 10,000-seat Nutter Center and 9,000-seat Fifth Third Field are larger.

Turn it into a public venue, invest a little, and give it better management, and we’re all better off. Build a nice soccer/football stadium up there too- and hold regional games. Might be a great place for a regional olympic swimming pool too.

Book sales, Hamvention, and a hockey team are ready to come back, if the County and the fairgrounds board would just stop futzing around.

Make it a joint project between Metroparks and the Dayton Convention and Visitors Bureau for funding and ownership.

David – when’s the last time that you attended a genuine county fair?  No question the location of the MoCo FG is urban and not consistent w/ the flavor of livestock, agri-awards, 4H and the rest.  My crystal ball says the Trotwood/Hara idea is also not right.  The optimum location was Brookville off I-70.  It continues to be a mammoth mystery why the relocation was scuttled.  Hara is not right for this use.  This weekend the Ross Co. FG is hosting the County Fair with 1400 campers on site for the livestock exhibitors.   Before everybody gets too carried away with the menagerie design of Hara, take a closer look to discover it was add-on, add-on, add-on w/ not much architectual consistency.  It is, no question, a mish-mosh.

Mayor Mary of Trotwood has worked hard on landing the FG in or near Trotwood.  She should keep trying; but, cheerlead for a more logical location than Hara.

Lastly, your remark toward better management is  really unfair.  I’ve been acquainted w/ Karen Wampler for a long, long time and under thankless, winless circumstances she and Rue worked tirelessly to try to keep the lights on at the outdated venue.  If for a minute you think you’ll get that proprietary level of labor by having a government entity run the joint, then you just have not had your eyes wide open to see the ineptitude in every layer of management of the County and City of Dayton.

Jack- The Hara property is bigger than you think. It includes a 9 hole golf course. And, we’re not Ross county. There were never 1400 campers downtown. Never would be. There may have been 1400 unruly youths- but not campers.
As to my comment about management- I never said that the Wamplers were incompetent. They were unfairly burdened with taxes- and with a badly managed estate transfer.
Metroparks has managed to do a really good job managing their facilities. Show me an example where they screwed up.
Hara needs to be saved. The fairgrounds- may never come back. Combine the two- and their bookings- and fix the joint up- and you’re viable.

I can see this working. Metroparks does a great job.

The only problem I can see is the building itself. It’s in really bad shape, and never looked all that great to begin with. Feels like a giant mobile home. Might take more than $20m, but it’s still a good idea

Grew up in Trotwood

Won’t ever happen.  Rich, white folks have written off Trotwood as a destination and nothing will fix that.

I’ll take Grew Up In Trotwood’s comment one step further and say that because of the “rich white folks” writing off Trotwood, the individual events will likely be better off when they relocate to more desirable neighborhoods.

I wonder how Hamvention will do at the Greene County fairgrounds for instance. Or how the gun and knife shows will fare now that they’ll most certainly move to the airport.

Seems to be an obsession on this blog with “rich white folks” lately.  Sheesh!

Last I heard, the “Airport Exposition Center” is now closed for expositions.  Bill Goodman & Co. will have to find another venue.  Unless, Auston, you are inferring that they could do the gun and knife show in the terminal building.  ;)

I’m neither rich nor white and I still don’t do any business in Trotwood unless I have absolutely no other choice.

Substitute Sycamore State Park for Hara and you’ve got something.  The state has more or less abandoned this huge chunk of green space.  Turn the entire park over to FiveRivers to further develop, maintain and program.  Combined with the wetlands bank and the old Larch Tree property and you have a huge, contiguous park.  Subdivide xxx acres and develop the fairgrounds ….. off Diamond Mill….pay $ 1 a year to lease from FiveRivers.     Turn Sycamore into a huge horse centric facility given that it already has many trails throughout.  Board your horse at the fairground and ride the trails.  This site is practically at the center (geographically) of Montgomery County….. and west of Union is primarily agriculture.

RE: Sycamore Park * M. Riley remarks ^ it’s incidental; but, i think the idea that Sycamore Woods is center of MoCo is off by a lot.  BUT!  forget that assertion.  the location and details on Riley’s suggestion is absolutely on the mark!  Rural feel, green space and not bad egress from I-70 and SR 49.  Now, the thought to focus as equestrian, while terrific in concept, is likely not the direction the Agri Bd. has in mind.  Lebanon and Springfield have aimed toward flea market / antique / gigantic trading marts is my best guess as to the Counties primary usage.  HOWEVER, Riley’s horseplay (see what I did there?) fulfills a need and just might, if they can pause to consider an alternative idea, just might deliver a year-round purpose.  What with the demise of the existing FGs; and, no stabling at the new Hollywood Racino .. there is a genuine need that the agri Bd. completely discounted on deciding to close their horse barns.  Lastly, take that renovation est. for Hara @ $20M and use it on pole barns and sheet metal expo bldgs. and, to me, you’ve landed on a far better use of those monies.

I should have said that Sycamore was in the center of what is left of green space/agricultural land in Montgomery County.   All that it requires for this concept to happen is governmental cooperation….between the State, FiveRivers and the Fairgrounds Board.  Imagine a Fairgrounds setting in a park of nearly 2800 acres with horse trails and camping throughout.    The park, as it is will never be developed. ODNR doesn’t have that kind of money any more.   Trotwoods needs help .   The wetlands bank that FiveRivers has there does not do much good for the people of Trotwood…. BUT it does facilitate lots of of development elsewhere in the region as developers plow under wetlands.  What does Trotwood get ? …… not much.

I think part of the reason that the Mont Co Fairgrounds always had a good chance for the fair is that it has a direct line for transportation.  I haven’t really seen anyone talk about that, or I haven’t read everything posted and just thought I have.  With moving it to BFE off of 70, is there RTA transportation in that area?  I don’t go out that way unless I have to, and I make it a point to not “have to”.  RTA has that huge hub just down the street in Trotwood from Hara’s complex.  People who have no other means of transportation could still go and enjoy themselves, so I am in agreement with David on this one; I would like to see it moved to Trotwood.  We love going to Taqueria Mixteca across from the old Salem Mall area.:)

The lack of RTA transportation to the (former) proposed Brookville site shouldn’t be a surprise to anyone – it was likely part of the plan. The Montgomery Co Fair has a reputation issue on the non-agricultural aspects and that’s why they were looking so far away from the city. The fact that they’re considering Huber Heights is a surprise to me.

When Walmart left Trotwood to move just 4 miles to a completely undeveloped location outside of Trotwood/Madison Twp, I was told specifically by a member of Walmart’s regional management that that location was chosen because of the lack of RTA service.

FWIW, when I bought my house, I specifically chose my location because of the lack of RTA service. I went as far out as I could afford, deliberately.