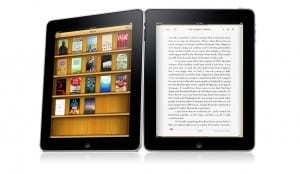 Today Apple announced the iPad. I’m not in love with the name- sounds like a feminine hygiene product to me {update- a skit from 3 years ago makes fun of this name- not for those easily offended} , but, since Apple makes it- it will sell no matter what it’s called. I would have preferred ApplePad or even the return of the Apple Newton name (a product that was ahead of its time in many ways).

Sometimes talking with Greg is like riding a mechanical bull, so my serious ideas about how the iPad is a potential game changer got banged around pretty hard in our video. But, I’ll be posting thoughts over on the business site soon. If you don’t know what an iPad is- Apple has lots of information on its site as to the nuts and bolts. What I see is the potential for newspapers to finally abandon print- jettisoning the daily delivery of a dead tree with ink- into a real delivery of their product- news. With the ease of distribution through the Apple iBook store- and the future potential to target ads to individuals through this intuitive interface- this could be the savior of the newspaper business. If wifi were ubiquitous, the connectivity issue would work- get a free iPad with your subscription to a “sponsor” paper (sort of the way cell phones are sold)- but the cost load is delivered through targeted ad delivery and some subscription revenue to the paper.

Each newspaper would collect a “scrape” from other newspapers who are read through the sponsor’s device. The DDN would own the database and relationship and make money by managing your relationship with advertisers along with delivering the local part of the news. This wasn’t included in the presentation – but, is not much different from the way the apps store has worked for delivery of ads. Granted, no one is making billions yet from iApps- except Apple- but that could change if enough iPads landed in peoples hands and enough printing presses went the way of the dodo.

But- back to the game changer part. Apple is not the first e-reader, or tablet computer. In fact, they are late to the game- as they were with the Mac and with the iPod and the iPhone. They just came up with a better idea with a better design. So much of Apple’s aura is from the interaction between people and a computer.

That interface is where Dayton could use a total overhaul. We project ourselves as Dayton when it suits us- but most of the time, we’ve got 500 different chiefs ruling 600 Indians. We’ve never been elegant- or easy to explain. We operate in our own little reality distortion field – thinking we’ve got a product people want- when if fact, we don’t have a product at all.

If Dayton were what we think it is, we wouldn’t be seeing a steady stream of bad news- with jobs leaving, crime happening and committees being formed constantly to solve our problem. Nope, we’d have a Steve Jobs to lead us – with a clear vision- of creating something insanely great for us to announce to the world. We’d be making best practices, instead of copying them. We’d be asking “what if” more and not “how do”- there was a time when Dayton did lead the way, but no longer.

With our low cost of living, moderate climate, central location, abundant water, nice people and enough smart people hiding in the woodwork- all we need is a nice shiny vision of where we’re going and how to get there.

Before Steve Jobs came back to Apple they were on the brink of collapse. Now- where are they?

Memo to Mayor Gary Leitzell: Steve Jobs doesn’t do ANYTHING by committee.

I see a different Dayton- do you? In the meantime- take another look at the iPad- do you see the game changing potential? I do.

Memo to Mayor Gary Leitzell- Steve Jobs doesn’t do ANYTHING by committee.

I think I’d rather have a mayor that recognizes he isn’t the single fount of good ideas,  than a mayor who would have been an “excellent King of France.”  Kings aren’t generally motivated to “learn how to get out of the way of people who actually make things happen around here.“

Apple quality? Last longer?  I think you’re mistaken Greg. I can’t think of a single first gen apple product in the last five years that wasn’t flawed with poor quality or design errors.
Macbook Pro – batteries explode, LCD defects, overheating
Macbook – discoloration of palm rests, LCD inverter board failures
Touch devices – screen cracking, scratching, no MMS, no copy/paste
Don’t even get me started on the 1GHz distater that is the AppleTV. Even the $3000 Mac Pro has had fan problems, overheating (fanless) video card issues.. Apple quality,  give me a break. Every iPod I’ve ever owned has turned into a paper weight after a years use.. harddrives start clicking, non-user replaceable batteries die.. and on and one and on.
I love the Mac OS, I love my third gen MBP.. but anyone dumb enough to buy this thing is just pissing their money away. It doesn’t even have GPS! You can’t multitask.. ugh, I like the idea but there is a lot of room for improvement. This is no game changer.

Sounds like you’ve had a  bad run, Chad. We’ve had 4 desktop Macs since 1990, 2 laptops, and 3 iPods. We’ve only replaced them because they became obsolete. As for the iPods, there are three of us in the family.  We’ve had minor issues in the past but honestly, nothing like what our friends with PCs have been through.  All the same, I could care less about an iPad, and I think there’s something slightly (or more) “off” about manufacturing desire for something that is really just another toy in a time when we all need to be focusing on that which is more essential.

Sometimes talking with Greg is like riding a mechanical bull, so my serious ideas about how the iPad is a potential game changer got banged around pretty hard in our video

Wah!  Come on, every kid has this energy eating device so we all can get lost in our techno world BS.  What brings innovation and Apple proves it is “coming to the office” where good ideas can get Banged around.  It is the same point I make about Dayton innovation.  It was innovative because of the free exchange of ideas with like minded people that lived in close proximity to one another and bounced ideas around.  The old Engineers club.  It is also the reason I dislike Leitzell’s picks because there appears to be no alternative thinkers to “bang around” an Idea.   Take the banging with a grain of salt and decide whether the point can be slightly changed.  You seem not to change your mind in spite of data.  I could show you mountains of data that proves the gambling on the ponies is a better bet for society at large than the one arm bandit, but to David all Gambling is Bad.  OY.

Ok Chad.  I will agree with some of the quality issues and yes I have had mine with the Ipod and Itunes; however, I paid 70 bucks to send a cruddy Ipod back and they sent a refurbished one that does not have the same issues.  My brother and my friend have the original Ipod and they are still working.  In addition, the open source software allows my Iphone to do many things, where the PC is  always working to shut out things.  I guess I meant Apple had quality of thinking and design with a seemingly proper speed to get to the market place.

In addition, the open source software allows my Iphone to do many things, where the PC is  always working to shut out things.

Only if you refuse to install a real operating system on it, the Apple ecosystem is a great example of a walled-garden (nothing wrong with that, it means a well managed, quality user experience), but it is open source lite.

Okay jstults I agree but I hacked my Iphone pretty easily which was nice for my overseas deployment, but other than that the PC Windows 7 experience is enough for me.  I have a friend who is a much better programmer and I am an Idea/Product tester.  We all have our roles and we must understand our limitations….

I think the iPad is going to be comparable to Google- delivering what you want, with some nifty ads thrown in. IOW, it’s an awesome way to sell advertising, in a tres glossy experience.  Kool-aid. Yum.

And you are so right about that name. Jesus. Do they seriously not have any females working at Apple?