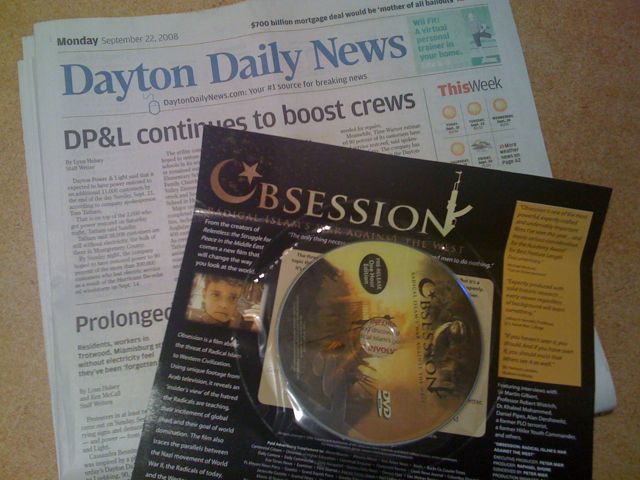 Found a surprise with my paper this monring- a DVD from the “Clarion Fund” warning me that’s it’s “…required viewing for everyone” and as seen on CNN and FOX News by more than 20 million viewers worldwide.” Wow, I’ve always trusted Fox News to be “Fair and balanced”- not.

It’s “Obsession, radical islam’s war against the West.” and while I fully believe radical almost anything is dangerous by it’s very nature- I’m pretty sure that fear mongering is not the answer.

A quick search brought up some good links to read about this- it’s being distributed in “Swing States” to persuade us that John McCain is the answer (wouldn’t be prudent to let a man with a Muslim name try to settle things down after we’ve done everything we could to fuel radical Muslims hate for us for the last 8 years now, would it.)

Here are the links:

and a full explanation of the film at the Huffington Post:

Considering the Dayton Daily News has it’s lowest subscriber count on Mondays- it would seem the Clarion Fund is running out of money- or just not that bright.

It would also help to send it to homes that have power, so they might actually be able to watch this (I had to go to my office to read the paper).

Just remember, while our government is bailing out a bunch of the richest CEOs in America, and the oil companies are all reporting record profits; you and I, John Q. Public are all losing value in our homes, pension funds, retirement accounts (the latest joke is that your 401K is now a 201K) largely because we’ve had leaders at the helm who’ve allowed the “greed mongers” to wildly profit on the backs of the entire world.

Radical Islam is only the first signs of the coming revolution if we continue to allow this exploitation to continue. Italy cheered Mussolini for making the trains run on time, Hitler was the answer to a proud country that had been humiliated after defeat- right now, I live in the “most powerful nation in the world” without power, being asked to watch a video vilifying a response to our extension of power in places we had no business being.

I’m sorry- more than one light bulb was just lit, and it wasn’t from DP&L.

Please consider carefully your choice in the November election. Do we want someone who extends a hand welcoming all to the table, or do we want an iron fist. I think we’ve seen where a fist gets us.

Calls and letters to the Dayton Daily News and their major regular advertisers are in order. Would (or will) DDN distribute racist propaganda against Jews, blacks, the disabled, women, homosexuals, Catholics, Buddhists, Lutherans? It is truly sickening how Islam has become “fair game” for hate-mongerers.

I deeply resent that the DDN brought this DVD to my house, where it might be viewed by my impressionable teenage son, and I intend to make my displeasure known not only to them, but also to their regular advertisers. How can I support Elder Beerman, Target, Kroger etc. when they support a newspaper that distributes this kind of hateful, racist and discriminatory material?

Further, freedom of expression has its limits. Isn’t inciting hatred of a particular people or group now considered a hate crime? Perhaps some ambitious DA ought to look into this.

I threw it away before realizing what it was!

i watched it. it was not that bad. DDN should not be involved. indy dist./freedom should apply.

It was bs – but so is a lot of stuff. they should send it via us mail rather than DDN.

People hate us. A lot of ” us ” hate people. decide to tolerant, or toiletrant. 9/11 is still one of the biggest wuss deals of all time. Fudge, an AB could get rid of a million times what they did, it is just a game (of sorts)

“They” also have a system of propaganda that is used to create anti-west/U.S. sentiment….well kind of like putting DVD’s in a newspaper. Fight fire with fire.

After a few beers I have started to tell people that when I am 40 we will be fighting a new religious world war. Can’t you just feel it coming?

Side note: Dr. Norma Shepaleck at Wright St. told me back in 2002 that the second great depression would happen in the next 5 years. Her prediction was based on social inequality data. Well 12 years or so after the first great depression a world war was fought. What a future to look forward to.

A reminder to J.R. Locke: You cannot predict the future by looking at the past.

Let me also be accused of fear-mongering.
On the day after 9/11, I posted a note on the Internet that closely resembles the sentiments of this DVD.
Go to http://groups.yahoo.com/group/JOINint/message/3248

I get kind of nostalgic when I open my paper to see this sort of crap. Remember when NEWSpapers represented accounts of events? Punctuation was used (properly), the correct words were used and spelled correctly, sentences actually made sense. Sigh. Does this make me an old codger to want to read a paper that tells me responsibly what is going on in the world?

So now, not only does the only paper in town present our children with unholy examples of writing, but they have ceased to be conveyors of observed events and have now placed themselves squarely at the feed trough of right-wing propaganda.

Should anyone think I’m just noticing this situation, I’m not. I’m extraordinarily grumpy at having just returned to the city in time to enjoy being the last in the area to get my power back on. So being powerless to do anything about that, I’m whining about the continued spiral down (to about the seventh level) of the fifth estate.

“Though we would like to think differently, there really are evil people who spend all their time thinking and planning the destruction of American men, women and children. While Christians and Jews are primary targets, these very bad terrorists do not discriminate in their desire to kill and destroy anyone who does not believe as they do. For our enemy, this is a cultural war, this is a religious war, this is a necessary war. Radical, militant Muslims have declared war on America.”

This could be like a “mad lib” for propaganda! Just replace “terrorist” and “Muslim” with “Christian”, and “Christian” and “jew” with “non-Christians” and “homosexuals”. Or any other groups!

I also enjoy the “these very bad terrorists” line – those bad, naughty terrorists! Use your big words, brain washing machine! Oh wait, multiple syllables will confuse and scare the slower members of your flock :(

There are a lot of people who want Americans dead. That is just a fact. I think you should pay attention to these people – but you don’t have to fear them on a day to day basis. I know AIDS exists, I am scared of AIDS but not people with AIDS, I realize the potential disasters that exist with AIDS, but I can separate a fear of something on a day to day basis yet still know it exists. I don’t have to hate it, I just have to accept it and move on.

I saw that in my paper. I dont blame the DDN for it, its about revenue for them. The readers themselves should easily be able to figure out what its all about. I knew right away when I saw “fund” in the provided by section well this is political trash.

They are also coming through the US Mail. My wife received a copy today in the mail.

Good versus Evil! So simple.

A friend told me recently that as long as there is evil in the world, there will be wars.

To which I responded, “well, for order for us to end war by your standards, we would all have to kill ourselves.”

Looks like the DDN really did it this time: