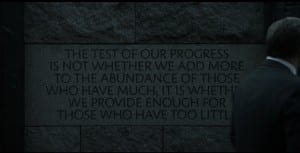 I’m binge watching as best as I can- season 3 of House of Cards. Episode 7 made me think.

Almost all political drama is someone’s attempt at introducing an idealized version of politics- from Aaron Sorkin’s “West Wing” with Jeb Bartlett, played by our man from South Park, Martin Sheen nee Estevez, to, well, even the sociopath Francis Underwood in “House of Cards.”
When Francis visited the FDR memorial – the quotes were even more poignant and relevant today.

I’ve never been to the FDR memorial, but visiting it online- you can read the quotes.

I went and grabbed a few- although only the 2 in bold appeared in the show:

“In these days of difficulty, we Americans everywhere must and shall choose the path of social justice…the path of faith, the path of hope, and the path of love toward our fellow man.”
October 2, 1932

“No country, however rich, can afford the waste of its human resources. Demoralization caused by vast unemployment is our greatest extravagance. Morally, it is the greatest menace to our social order.”
September 30, 1934

“Men and nature must work hand in hand. The throwing out of balance of the resources of nature throws out of balance also the lives of men.”
January 24, 1935

“I see one-third of a nation ill-housed, ill-clad, ill-nourished.” “The test of our progress is not whether we add more to the abundance of those who have much; it is whether we provide enough for those who have too little.”
January 20, 1937

“We must scrupulously guard the civil rights and civil liberties of all our citizens, whatever their background. We must remember that any oppression, any injustice, any hatred, is a wedge designed to attack our civilization.”
January 9, 1940

“They [who] seek to establish systems of government based on the regimentation of all human beings by a handful of individual rulers…call this a new order. It is not new and it is not order.”
March 15, 1941

Damn… we need him back.

How did America respond to the success of a man who thought like this- term limits. The 22nd Amendment.
The beginning of the end of people elected by the people instead of by the money.

Obama came into the same kind of mess that FDR was handed. I wonder if there were no term limits, and it didn’t take a billion or so to keep the seat, what could have happened.

Dave…
FDR made some eloquent comments (Jan 9, 1940) …but if he believed in constitutional rights for US citizenry, like he stated, why didn’t he sign an equal rights bill (voting, et.al.) for black Americans during the his term as President? Just saying.

…the path of social justice? Help an old man out, dear David. The Old Bandito is a little fuzzy on this whole social justice thing, due no doubt to years of alcohol abuse, ravaged neurons and the refusal of anyone using that term to define it. Is there, dear David. a Chief Social Justice of the United States who issues fatwas on what is socially just and what ain’t. Or is it like pornography insofar as most folks can’t give it a definition but they sure know it when they see it? The few times folks have tried to explain this concept, it sounded a lot like a philosophy that not only tries to excuse dysfunction, but actually subsidize it by mugging the productive by way of taxation. Path of social justice? Sounds more like the road to ruin or the highway to hell…

Ice- you focus on one quote. But the reality is- when people are unemployed, exploited, unfairly burdened (and no I don’t mean the 1% who you care about more than Jesus himself)- it tends to lead to a revolution-
And generally- those aren’t good things.
It would be cheaper to just create universal employment than do all these stupid things in the name of “job creation” and “economic development”- and it would be cheaper to have universal healthcare than health insurance- and probably to give away college degrees than put money into grants and loans and the mechanisms we have now.
Call me a socialist- but, the reason the military is a good career is because you do get health care, a job and an education- and more money the more people you have in your family.
We’re on a highway to hell now.
I’d like to turnaround and head toward something that makes sense.

It never ceases to amaze me how liberals believe that they have the franchise on compassion and fair play. This is the same group that fervently bashes religion or common sense individuals of good will who find the liberal’s sense of compassion rather bizarre; such as, supporting the barbaric practice of abortion, and the generational systematic demoralization of an entire race through welfare, lowering testing standards, institutionalization, ever increasing social programs of dependency, and ever diminishing liberty for all. “They [who] seek to establish systems of government based on the regimentation of all human beings by a handful of individual rulers…call this a new order. It is not new and it is not order.” That quote pretty much summarizes today’s democratic party . . . and it absolutely summarizes the mentality of Barry Soetoro who’s mission is to over achieve in surpassing that of “becoming one of the handful” to becoming the supreme leader, and to do so by whatever means possible (constitution be damned). “It would be cheaper to just create universal employment than do all these stupid things in the name of “job creation” and “economic development”- and it would be cheaper to have universal healthcare than health insurance- and probably to give away college degrees than put money into grants and loans and the mechanisms we have now. Call me a socialist- but, the reason the military is a good career is because you do get health care, a job and an education- and more money the more people you have in your family. We’re on a highway to hell now. – ” Okay Dave, you are a socialist but certainly no economist and it’s frightening when I realize how this “give away” government provided mentality corrupts our nation. King Barry’s immigration policy is another set-up to guarantee votes for the democrat- socialist party for decades to come and is once again based upon give a ways. One of your comments I can agree with David is, “We’re on a highway to hell.” This is because the bill is due (over due) and we’re bankrupt with our… Read more »

Pretty scary the house of cards is going to fall. Right now we have mostly appointed officials in an official capacity with an empty suit to run an office and needs to be so called elected leaders which is now just a remnant of the power of office by the people for the people. In Dayton Democrat rules all and are in power by reasons of insanity, money, dysfunction, and rule by this motto and do it with rule by pure power nothing else! Blind faith by any and the few that do vote for the “party” keep the power corrupt machine working real well oiling it from time to time. It might feel good for while but after some time you will be told what to do with your life how to do it and never question anything. You sew what you reap. Enjoy all the times you had a choice to vote because soon you will not. Do not come crying because we are all in this together because of all the laziness, lack of concern, or no concern. Thank you David for at at least bringing these to our attention and providing the book that anyone can read for free and to pass the word. At least we have this forum and you tried to inform the people and so far the freedom to express ourselves here. It was my hope for some common sense from the people instead there is so much division ( just what these dictatorial leaders want) even on these blogs with thumbs down fighting with one another when we should be United but cuts us down and weakens us further; watch and learn what happens when Hillary takes office for president( god Help us) you all will wish you had voted;I direct this at the ones that never vote and complain the most. Complain now while you can as the hour of midnight is just a minute or so! There is not much but may be too little too late! There is an agenda by these individuals. Lets save the republic by… Read more »