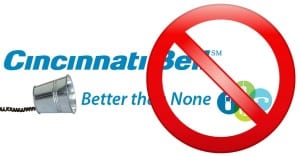 I used to be a big fan of Cincinnati Bell. Recommended them for business services often. Same copper as Ameritech/ATT/SBC Global or whatever they want to call themselves- but cheaper. Most of the time, the guy who came out to deal with problems was from ATT.

Last August we lost our main work number for 5 days. We quickly forwarded it to the rollover number- and waited. We had 3 different service calls- each guy said the same thing- it’s at the central office. Cincinnati Bell was in utter denial. About the same time- our DSL started acting wonky too. Could barely get any work done. Constant disconnects- loss of connectivity. No amount of calling their call center in who knows where helped.

I decided to make a change. It was time to go to Voice over IP- and I picked Ooma business for a solution. I was going to drop my 2 voice lines, keep my fax and the DSL- which by this time was working, and spend the $100 or so I was saving in phone bills- and use it to get much faster internet over the air- from Dayton Digital Development (yes – I know he needs a better site). The reason for keeping one land line was for the burglar alarm and because when the power goes out- we would still have one working phone line. I also realized our business depends too much on the Internet to not have a backup.

The Federal government passed a law about the porting or transferability of phone numbers- requiring it to happen in one business day for “simple ports” – yet Cincinnati Bell and Ooma say it should complete in 30 days. Fine- I request the port in early September. It gets rejected in early October. Ostensibly because I was “in contract.” This began a series of calls, and additional report requests. To make a long story short, after the contract freeze excuse was cleared, for the next 5 months, Cincinnati Bell kept refusing port requests, but wouldn’t say why. Finally, after requesting help from the PUCO, it came out that there was an “Open work order” that was holding up the process- and yet- another month went by and still no port. Cincinnati Bell was now claiming I had never told them what number was porting.

With a few more calls to the PUCO- and their intervention, I finally got my number ported at the beginning of March. All this time, not using my number for anything but a forwarding number to Ooma. Cincinnati Bell did manage to raise my rate $3 for my DSL during this period- and continued to bill me for a number and 375 anytime minutes that we didn’t need since we were using VOIP the whole time.

Now, all requests for refunds fall on dead foreign ears.

One of the reasons I liked doing business with Cincinnati Bell was because it was “Cincinnati Bell”- and not “Voice of the Philippines” – but, alas, customer service and responding to customers problems isn’t important to them.

For 6 months, when I was calling out from my business line, the number people were seeing on their cell phones didn’t register as my business. How many calls didn’t get picked up right away, how many opportunities I lost, didn’t matter to Cincinnati Bell.

I’m filing a complaint with the FCC now- and planning on taking Cincinnati Bell to court.

One tip I can give you- you’ll get better and more attention from their Social Media team every time. Forget using a phone to complain to this “phone(y) company.”

I feel your pain. I have been experiencing the same kind of thing with CareSource. I work for a local non-profit that doesn’t offer health insurance, so my family was forced into the Healthcare.gov/Obamacare fiasco. Don’t even get me started on the utter incompetence of the people who pick up the phone for Healthcare.gov.

Anyway, all during 2014 I paid my monthly health insurance premium online on the CareSource website. No issues at all. None, nada, zip. 2015 rolls around, and for no reason anyone at CareSource can explain, suddenly I am unable to pay online. I’m not comfortable giving my credit card information to a random unknown person over the phone, and none of the many CareSource reps I spoke with could offer any explanation.

I’ve been forced to write checks every month and waste postage stamps mailing my premium. HA HA hilarious. Is it CareSource’s new mission to keep the USPS in business?

This afternoon, I posted a semi-snarky comment on CareSource’s FB page and literally within a minute someone from CareSource replied that they had escalated my issue and a CareSource rep would be contacting me shortly.

It’s a sorry state of affairs when a paying customer has to resort to publicly shaming a company in order to get a response. Fingers crossed they figure out what’s up with their website and my inability to pay online.