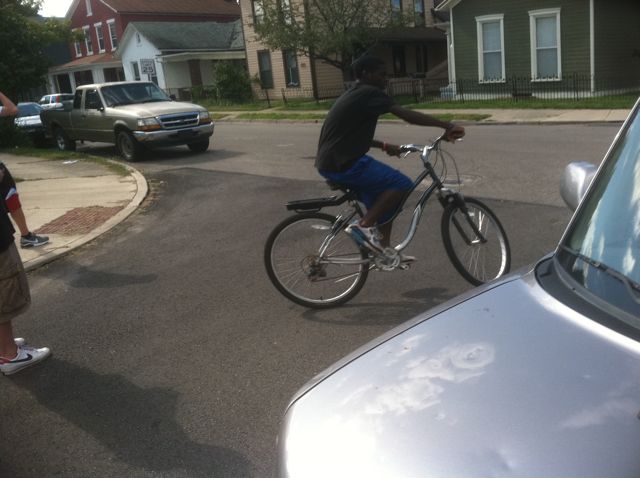 Some of you may have noticed that the number of updates to Esrati.com has decreased in the last few weeks. One reason is that it took a bit of time to write the two big posts of late: The resignation of Dayton Daily News photo chief Larry Price– which went international, and the post about the competing efforts on regionalism (which to have been totally right would have taken a few solid days of calling for comment, etc., if I were paid to do this).

We’re also very busy at The Next Wave, opening a Miami FL office, launching our new web site, creating new brands, building web sites, making video, crafting advertising. The Huff-n-Puff hockey season also started.  Add in that I’ve also had to deal with the latest break in, adding late night walks on “security patrol” to my already stretched schedule.  The latest update on that in a bit, plus how I saved a dog’s life.

Then, to top it all off- I’ve got kidney stones. Not the first time, that was about 10 years ago- and the first time I had ever been given morphine. I had gone to Miami Valley Hospital, barely able to walk, and 15 minutes after the shot- I was ready to dance. Unfortunately, the next 36 hours- I was in bed- in and out of consciousness.  Won’t make that mistake again- this time, it’s only vicoden- which I’m on after a 9 p.m. trip to the VA emergency room last night.

I know that our local Congressman, Mike Turner, has made it a personal mission to vilify the entire institution over one dentist’s gross misconduct. But, as a Service Disabled Veteran, who gave up my private health insurance about 6 years ago and have only received my care from the VA- I would like to tell you that all your fears of “socialized medicine” would go away if the kind of care I’ve received was scalable to the entire country.

I see my General Practitioner twice a year. He typically spends between 30 and 45 minutes going over my health with me. He responds to e-mail about questions in my care program, his nurse- Mike, has become a good friend, and any test that’s needed, gets done, without question of cost. I recently had a CAT scan for my stones, no problem. All records are digital, including X-rays.

Pharmacy is all done by mail, with an online portal for renewals of regular medication. My eyes get checked annually, and glasses are available free from a choice of basic frames and for about $100 for “designer” frames. I’ve been wearing the $100 frames for a few years- and had many compliments.

My only complaint over the years is that I had forgotten some basic medication (not a narcotic)  when on a trip- tried to get a few pills for 2 days in St. Louis, where they wanted to go through a whole bunch of craziness including an ER visit, where if I’d had my prescription at Walgreens, it would have been walk in and sign.

You should be as lucky as me to have such an amazing team of people that took care of me last night. Thanks to Knickenbocker, Fat Pat (we’ll hit the road for a scoot soon), Amy, Heather, Doc D for taking amazing care of me.

If this seems like a ramble- it’s proof not to take drugs and write. 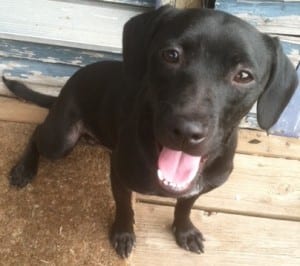 We also began fostering a puppy for SICSA on Friday around 5. I think we’re going to fail our first foster- and end up with “Scooby” (a name we hate)- a 7-month-old terrier-lab mix, who weighs about 25 lbs.

It was yesterday morning when SICSA called and asked us to bring him in for a “vet check.” Turns out, he came in with 3 other puppies from a family that had him living in their yard. The house was foreclosed on, and the 4 came in. Before they checked all of them- we had the Scoobster. The girls introduced him to our two 10-year-old big dogs, with minimum fighting. And he started making friends, esp. with me (dogs tend to like me a lot more than people do). So, less than 20 hours after we have him- and all of us have been loving on the mutt, I get the news that the other three pups were destroyed- one had ringworm, and the other two were put down as a precaution. Do we want to keep Scooby, having to wait 2 weeks to see if the culture tests positive for ringworm- in which case, we’re looking at 4 additional weeks of fostering (by which time, I think I’d have a hard time giving him up). Or, hand him back, in which case, he wouldn’t live to  see 3 p.m. (it was 2:30 p.m.).

Ringworm isn’t a horrible disease, it’s easily cured with Lotramin AF, but the problem is it’s easily transmitted through microscopic spores that are only killed by lots of UV light, or bleach. We’d have to soak all three dogs with Sulfur Lime solution (we now have three rotten egg smelling dogs)- and keep Scooby semi-isolated.

Obviously- I brought him home. Odds are about 50/50 that he has ringworm- but, we won’t know till the end of the month. 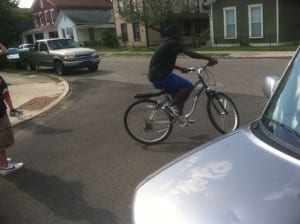 On the way home, I stopped by Family Dollar on Clover St. at Wayne to pick up some Lotramin AF. As I was pulling out of the lot, I see three teens, in the middle of Theobald Lane- one of whom was on Teresa’s bike that was stolen. I pull the car over- taking pictures with my iPhone as I get out of the car. They start asking me what I’m doing taking pictures- I say “That bike was my Girlfriend’s until it was stolen last week” at which point- the kid starts pedaling as I start chasing. Note: keys are in car, Scooby is in the car, and there are three of them. The kid realizes he can’t get the bike going fast enough- as I’m running and about to grab him- so he dumps the bike and takes off running toward the Cricket Store. I stop- take more pix- and call 911.

Neighbor Rob Gonzalez, comes by in his jeep- asks what’s up- I give him description of punk kid, he goes looking for him. Note, Rob is  SFC Gonzalez, U.S. Army- and is a Military Police officer. Luckily for the punk kid- Rob doesn’t find him.

The other two talk trash as I take more photos and wait for the cops, who show up in about 15 minutes. The cop gives me a form for E-crew (Dayton’s Evidence Crew)- but says they won’t get prints off the bike, and tells me to take it home.

Turns out when I get it home- Teresa says it’s not her bike. Same style, same color- but slightly different. So now, I’ve “stolen” a stolen bike. I’ll explain to the cops when they show up. I’ve posted pictures to our neighborhood crime watch group on Facebook- to ID all three kids- to see what we can come up with. Our community based police officers also have all the pix.

Add in a few hours of work in the early morning at the office, a trip to the bank and the Second Street market (where I ran into Bubba Jones)- and you have a day in the life of David Esrati.

May your life not be like mine. I’m off to vicoden dreams.

However, I’m going to leave you with something I wrote in response to someone who didn’t like my language in describing the criminal element (and future criminal elements) in our neighborhood: “Pollyanna won’t save you. Buford Pusser will.”

Hope you have a better week coming up starting tomorrow …

Actually I think your life seems pretty great! A new dog, great friends who look out for each other, a love, good healthcare, a job, a neighborhood you care about. I’m sorry to hear about your kidney stones but any life that exciting is bound to have ups and downs that don’t always bounce onto what you would have chosen. Be well, be healthy and feel blessed!

Your life is more interesting than mine, in both the positive and negative sense of the term. Adorable puppy; congrats! I hope the stones pass quickly and you can get back up to speed soon.

@Andria- welcome- and thanks. I’ve been told the puppy is supposed to go back- so someone else can adopt him. If he’s only with us for 2 weeks- that will be easy. If we have to keep him for 6 weeks it may be a little harder.

Scooby is such an adorable lil boo!
And you’re crazy, Esrati. What else is new? =)

I can’t really tell what this blog stands for, other than some kind of moral high ground to stand upon. If I’d have to guess, that all of the time and energy spent on this blog does very little for the Dayton community as a whole. Essentially, I am sensitive enough to be understanding of this: Esrati blog plays a role Dayton as that of the pinky finger of the stagnant corrupt Dayton bureaucracy hand, which is naturally that of uncreative ideas, neuroticism, and no real understanding of self or that of charity and love.  The example you set here will go on and on until you find any kind of truth in yourself to share here on this long running/winded blog. Yet I’m sure, without any real need of research, you have a comfortable life which would deter you from doing that sort of thing.

@Matt- by “this blog” you mean the entire site or just this post?
Frankly- you are entitled to your opinion- but just the other day, thanks to this blog- the county decided to post all RFP’s on their site- for everyone to see- and changed their policy of posting jpgs embedded in PDFs for their minutes- thus making them searchable by google and useable by people with vision impairment.
This blog- also has exposed corruption, scams, political payoffs, fraud and identified all kinds of things we could do to improve Dayton.
If you don’t like this site- don’t read it. Have a nice life.