Remember this time last year? That’s when the board was willing to spend $200,000 to hire Huffmaster to break a DEA strike, because, well, we didn’t have the money to pay our teachers more.

We lost staff, who bolted instead of risking a strike, the money to Huffmaster was wasted, with a last minute deal, and the teachers who didn’t get their step increases, or a three year contract, had to start the school year off last year without their normal prep time.

We could blame Rhonda Corr for that, although the more likely suspect was Adil Baguirov (who should have already been off the board over his residency issue), but the reality is- the rest of the bargaining team is still in place, including our new Superintendent Libbie Lolli. 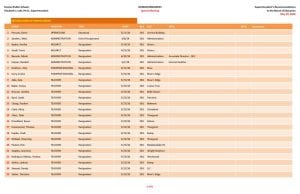 What a difference a year and a new board make. Lolli handed out RETROACTIVE raises to admin and staff, and now, extended the DEA contract, threw back in the step increases and released new pay scales- including 2 positions that seem really strange: Director 2 (No bachelors degree) starting at $79,380.77 and Associate Director 2 (No bachelors degree) starting at $67,470.63. Now, I grant you, a bachelors degree isn’t necessary to run a bus fleet or be head of maintenance, but, I’m wondering if these aren’t in place for a certain PR person- who might not have completed her studies at Ohio University.

That’s a lot of cash for someone who didn’t finish college – and to be working in education.

There also seems to be a whole lot of new directors. This week alone we find out that we are now still in the hunt for a Principal at Belmont- after Dr. Donetrus Hill had already started telling everyone that it will be a student uniform required school next year (for the record, East side schools tend not to require uniforms- West side do.).

The new to DPS Carolyn Mack is Chief of Curriculum, Instruction, PD/ELA/SS and making $119,966.00

The new Executive director of Athletics took the pay up over $100K, Shawna Welch- who has been with the district a long time, now makes $105,373.75
A new hire from Cincinnati Public Schools Lynsa Davie, is the new Chief of Schools Special Projects, and making $117,040.0
Now, let’s rewind back to Lori Ward’s day- where the complaint was that downtown was too top heavy….
You had about 7 people making over $100k, The superintendent, the Treasurer, the head of the construction project John Carr, and the two chiefs who managed the schools and the one constant teflon coated associate superintendent- Sheila Burton.
Burton, gets yet another raise as Associate Superintendent to $126,075.00 which is mind boggling, since she’s never taught in a real school, given grades, or had to write a lesson plan.
https://youtu.be/MxjVopw4wK0
Just for the record, Lisa Minor- who used to be Chief of School improvement- made $96K under Ward and worked her butt off, nights and weekends. She is now in Trotwood. She was one of the two people who engineered the A in annual yearly progress, the other being David Lawrence, who was making $120K before they bought his contract out. He also worked ridiculous hours.
There is a travesty in all this happy go Lolli spending- the only truly proven and competent person in the district, who happens to also hold a Superintendents license, is former Stiver Principal Erin Dooley- is now the Chief of Schools, Secondary- and is still going to be working at Stivers- is only getting paid $117,000.00, which is almost $3000 less than her elementary counterpart Wyetta Hayden, who can’t be found after 6pm, unless there is a board meeting.
Dooley has had the only top performing school in the district for the last 20 years. She’s the only one who has created a culture of excellence, and trained many principals. If there is anyone who should be making $127K a year it’s her- not Burton.
There are a few “you have to be kidding” promotions on this HR report- but, they aren’t worth discussing. The more interesting item is that the auditor is resigning, and we will see if the position gets refilled.
The 5 year budget wasn’t posted on Friday but is now. It will take a while to analyze, but you can guarantee a levy will be coming, and it’s also pretty probable it will fail.
Missing is an executive session to discuss a certain settlement offer. We’ll see if they update the agenda.

Maybe this is the beginning of a marketing to the community push?

Since Lolli is an introvert, and has shied away from any marketing plan, or efforts, maybe, she envisions all these new chiefs spreading out into the community to talk about the new changes she’s making.

Of course, the fact that few of her chiefs have ties to the community, or know it well, kinda hurt her if that’s her plan.

So far, we still have no strategic plan, the organizational chart and budget seem to be the only thing growing, while the district is shrinking.

Or as we used to say, “Too many chiefs, too few Indians.”

I loved today’s article, you’d think that some hotdog person with some bucks would link arms with you; that would result in emptying the Dayton Swamps, I am talking book or film for the future. Keep the fire to their feet David, your doing great.

From what I have heard, Lolli messed things up in Middletown after she taught there and moved up the ranks in Middletown. I met her briefly yesterday for a minute and she said she does not like to get into “politics”. I mentioned “Nanny State” Whaley to her and it sounds like she likes the fake Mayor of Dayton.